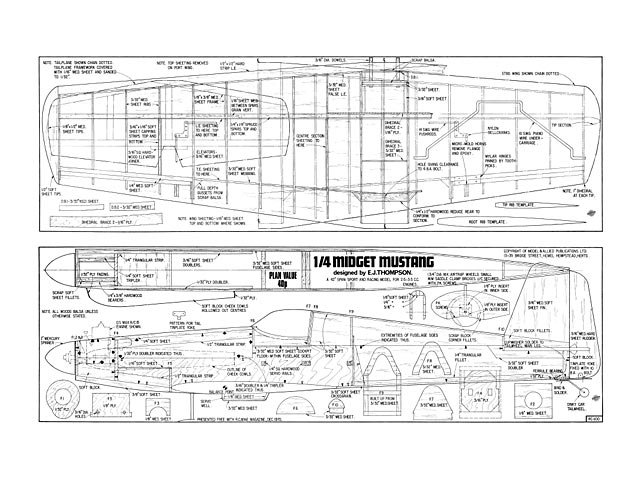 Quote: "FINDING myself in hospital and 'on the mend' and armed with the APS 1/48 scale drawing of the Long Midget, plus a specification for a miniature racer published by R/C Modeller magazine, I set about combining the two to create the offering herewith.

My Sprengbrook gear with 225 DEAC tips the scales at around 14 oz. and with the OS.15 plus silencer and all other bits and pieces, adding a further 7 oz the finished airframe including pushrods and linkages would need to weigh in at around 19 oz to get down to the minimum specified weight of 2-1/2 lbs. The model in the photographs came out 1 oz under this but the first flight indicated that about this amount of nose weight was required so the model ended up dead on 2-1/2 lbs. The OS 15 and the silencer, however, are both among the lighter ones in this power group, so if a heavier engine is to be fitted, the ballast would be unnecessary.

This model could handle a .19, which, although outside the maximum (.15) specified for the Quarter Midget class, would nevertheless be fine for some real zippy sport flying or mixing it in open pylon.

Although only a comparatively small motor is used (by R/C standards anyway) this does not mean that the model is in any way suitable for beginners. Neither should it be'detuned' by fitting a motor very much smaller than 2-1/2 cc because with the ultra thin wing section (71% at root) and small control surfaces, the power is needed for effective control. I will not go into the 'how you make it' routine because anyone building this model will, of necessity, have built and flown other models and will no doubt have their own ideas on construction methods and sequences, which in any case I cannot remember!), but I will make a few suggestions for consideration.

Wing and Undercarriage: For the original undercarriage as seen in the photographs I used 12 gauge wire but this just was not up to it. Unfortunately, shaping 10 gauge to the same pattern would. I think, be more than a trifle difficult, so if possible get hold of a wire bending device. Alternatively, a less scale-like but more simple undercarriage similar to that employed for the main wheels on a tricycle set up could be used.

This arrangement has the advantage of torsion bar springing. Next, although it has been written before, perhaps some may benefit from a description of the sandwich method for tapered wings. Start by making templates of root and tip ribs from plywood or something similar between which are 'sandwiched' the ten 3/32 in. sheet balsa blanks for the ten ribs of a half wing. After shaping to contours of templates a set of ribs will emerge with equal reduction from root to tip.

It will be seen that these ribs will have sloping edges because a half wing has been compressed into about an inch so the next step is to draw around the largest side of each of these ribs twice to produce a complete set of accurately tapered ribs. Waste can be almost eliminated by drawing round the smaller rib blanks on to the larger ones.

Please do not skip the webbing of spars and leading edge. Admittedly, this operation is a bit tedious but the resultant wing will be much stronger and very much more rigid. Remember this very thin wing is going to have to slide through the air at a 'fair old lick' so it needs to be well stressed. For the same reason it would be advisable to use a jig to ensure that the wing is true. The faster an aircraft flies, the greater is the effect (adverse) of any inaccuracies.

The jig need not be elaborate - all that is required are sheet balsa cradles to support root and tip ribs and tapered lengths of same for spars, leading and trailing edges set at the correct dihedral angle.

Fuselage: It will be seen from the plan that part of the rudder servo is aft of the wing trailing edge position - this being the only way that I could get it in. If, however, your gear will fit within the wing opening, so much the better. The slight forward shift of the weight mass will probably assist in arriving at the correct balance point. Also, if the aileron servo's overall length is no greater than the internal width of the fuselage, then access can be from the usual hole in the top side of the wing. If not, then resort to a hatch beneath the dummy air intake-cum-servo cover.

I do not intend to go into much precise detail about installation because of the many differences in equipment, except to suggest that the total throw of the ailerons be limited to half an inch initially and the elevators three eighths of an inch..." 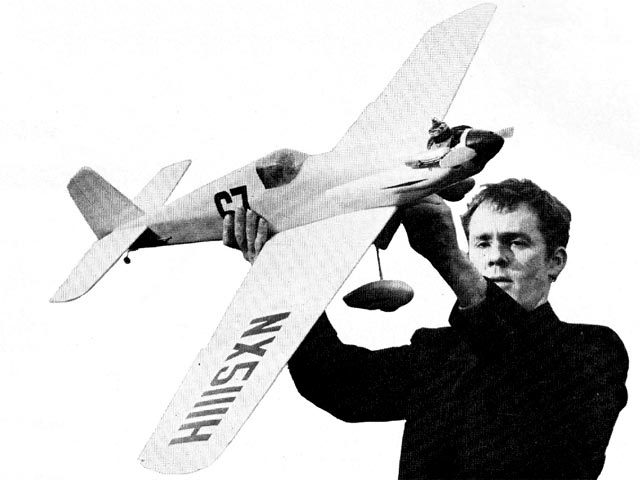