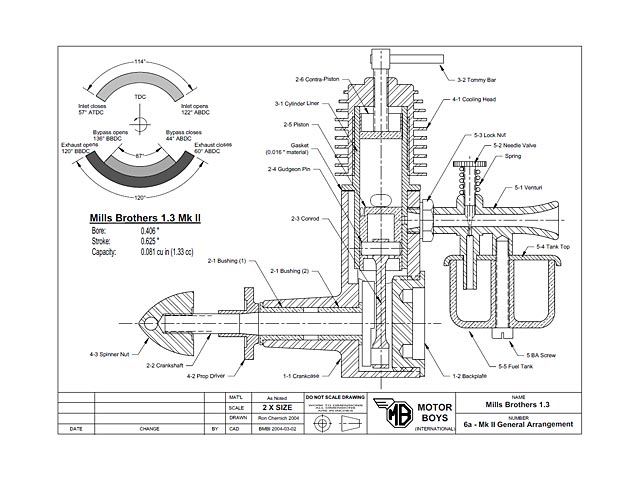 Note these plans were drawn up by Ron Chernich of the Motor Boys and were specifically done for the first edition of 'Model Engine Builder' magazine. See their website at: https://www.modelenginebuilder.com/. These plans appear here on Outerzone with the kind permission of Model Engine Builder.

For more background on the Mills 1.3 engine, see: http://modelenginenews.org/cardfile/m13-mk1.html

Quote: "Background: I approach this engine with trepidation, not because of a lack of facts, rather because of the weight of information available and the status of those who have authored it! In fact, we could say this engine has been done to death and anything I can add is of little impact or worth. Nevertheless, the Mills 1.3 strongly deserves an on-line reference, so my small contribution will be to use the Library to collect for the first time a reasonable bibliography of writings on this engine. Of necessity, we'll have to touch on the Mk II version of the engine, but I try to constrain descriptions mostly the aluminum cased Mk I. As a good start, the image here is a scan of the official factory installation drawing that accompanied the first version of the engine (courtesy of Mr Ken Croft, England).

The first version of the Mk I, frequently referred to as the 'Mark One, Series One', appeared on the UK market in 1946. This version is distinguished by a cooling jacket having all fins the same diameter. All Mk I's had aluminum crankcases as seen here. Anecdotal evidence exists that the first engines were 'hogged from the solid' although this may mean that rough sand castings were machined all over.

The photo here clearly shows the fuel cut-out mechanism. When forced against its stop, the spring loaded arm rotated a hole in the collar attached to it into alignment with a hole in the fuel feed stem. Provided the engine was not running flat out on a small prop, this quite effectively stopped the engine, though not instantly. Lawerence Sparey wrote that beyond a certain RPM figure, the cut-out was likely to have no effect whatever. All the venturi components were brass, plated after soldering. The plating is either cadmium, or dull nickel.

The most exhaustive treatment of the Mills 1.3 appeared in Roger Schroeder's Engine-uity column in The Engine Collectors Journal. Roger's research is augmented by material supplied to him by Ron Moulton, David Owen, and others. Ron's words later appeared in the SAM 35 Yearbook Number 7, enhanced with a transcript of a talk given at Farnborough in 1985 by Mr Reg Elton who had commenced working at the Mills Surrey factory in the spring of 1947. It is from Mr Elton that the 'hogged from the solid' assertion derives - on Myford ML 7 lathes no less.

The Mk II 1.3 was introduced in 1948. It is distinguished by a markedly different case, cast in magnesium, lightened by taper turning below the exhausts, and a die cast aluminum venturi (which together saved an ounce of all up weight). So even though Mk I's are easy to distinguish by their straight sided, aluminum cases and fabricated, plated venturi assemblies, there are subtle differences in the early variants. Most obvious is the change from the straight sided cooling jacket to the 'bee-hive' design commonly referred to as the 'Series II' (which has been rather discourteously, if accurately described as the 'pin-head' model). Less obvious are the changes made to the timing. The ultimate reversion of the engine and timing appeared in 1949 giving a substantial performance improvement..."

Quote: "Steve, the Mills 1.3 needs no introduction, most aeromodellers interested in making model engines would have had one or two over the years I reckon – I know I sure have. I built this engine from the MBI plans and it is every bit as good as the real McCoy – mostly a first flick starter. Photos [main pic, 003-005] here show the one I built, many years ago now, was my third build after the BollAero (oz13680) then the Owen Mate (oz13710). Thanks again, Ed" 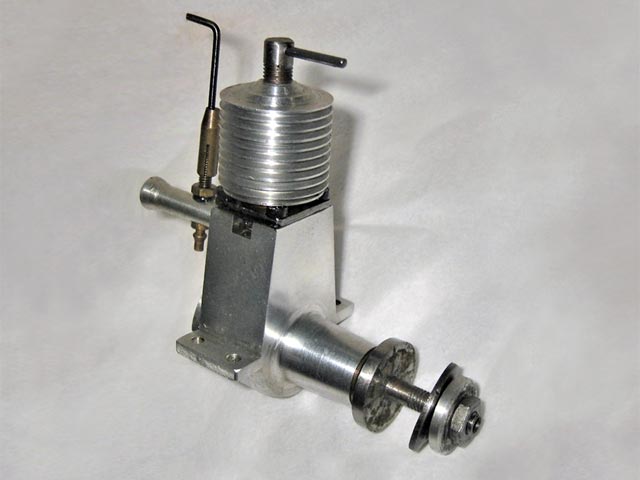