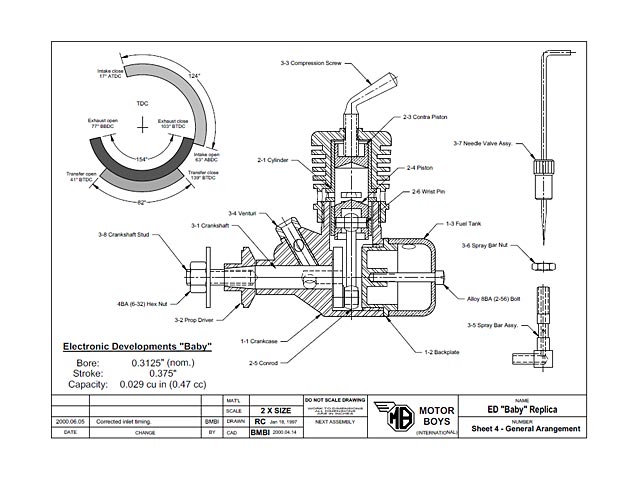 Quote: "The ED 0.46cc Baby. In 2000 Bob Washburn, editor of the well respected magazine, Strictly Internal Combustion (Strictly IC), shook up his readers by publishing a blank page with an ominous note in the middle saying that he had insufficient material to fill the issue and that contributions were urgently required. This was more shock treatment than reality, but it prodded me into action, proposing to Roger Schroeder a twice size version of the ED Baby. Roger's reply was, why not make it full size?, so we did.

I drew the plans, Roger poured castings, we both poured blood, sweat and tears into the construction article and made multiple prototypes, only to have SIC cease publication before it appeared! But Tim Dannels came to the rescue and our comprehensive build series finally appeared in the pages of Engine Collectors' Journal.

We learned a lot in the process, including a fact we should have known; that as size goes down, the criticality of fits goes up! In total, we built four prototypes and while all eventually ran and ran well, I have to say that this little engine is totally unsuitable for the beginner model engineer. But for the builder with a few larger diesels under their belt, it is a great little engine to build and operate.

The production version was made by Electronic Developments Ltd, 'ED' for short, one of Britain's most respected post-war manufacturers. Called the 'Baby' for obvious reasons, it was first announced in the March 1952 issue of the Aeromodeller and formed their entry in the small engine boom taking place on both sides of the Atlantic. It featured front rotary shaft induction with the needle valve swept distinctly upwards and rearwards; a nice feature given the nearness of the needle to the prop of such a small engine - although this effectively prevents the needle and spraybar from being swapped side for side. Another notable feature of the engine is the ocean-liner like 'port-hole' exhausts, eight in number. While they look great, they make the engine hard to port-prime and easy to flood when you do finally prime it! Later models revised the ports and all variations are shown on our plans.

One of the great things about model engineering is the way you never cease to learn and refine your knowledge and skills. I built two Babies using the traditional steel and cast-iron cylinder and piston combination, with a 'pinch' fit of the piston at TDC. Friction is the enemy of small engine success and I now know that a steel piston in a steel liner with almost no taper runs far better. This combination requires superior skills with the lap and hone, but the result is also superior, as the example I built this way attests. Naturally, skill and experience fitting pistons to finely honed liners is required, but the cost of material is almost nothing, so don't be afraid to junk a pair and try again. If you'd like to build one, Roger can supply the castings and the full build article can be read on the Model Engine News web site." 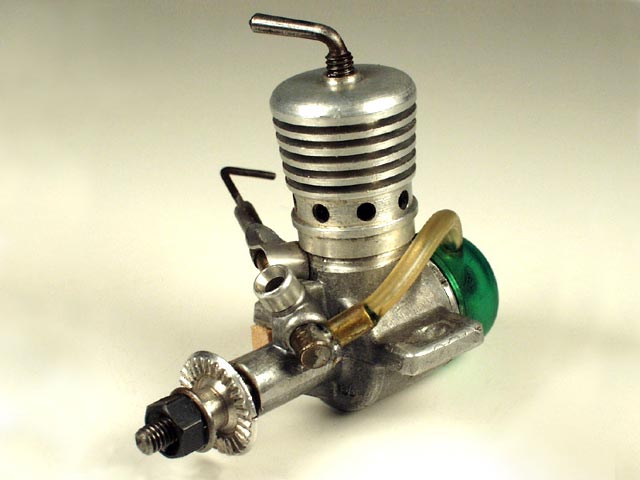