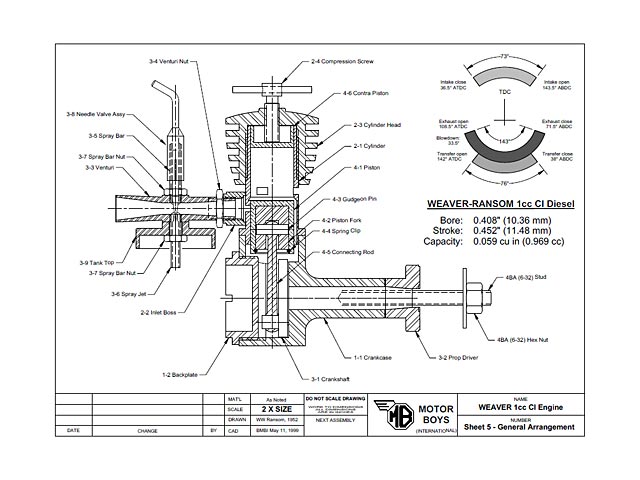 Quote: "The Weaver/Ransom 1 cc Diesel: In June 1952, a British magazine named Model Maker commenced a series of articles titled 'A 1cc CI Engine'. This series described a simple Compression Ignition engine (aka diesel) for home construction. The design was called the 'Weaver/Ransom' after the designer and draftsman, respectively. The magazine ceased publication in the early 60's, but the engine is still remembered in MICE circles, being often referred to simply as 'The Weaver'.

The subject of the magazine article was built and described by Mr Ransom to a design developed over several years by Arthur Weaver for use in rail car racing. This is similar to modern, electric slot-cars, except that the guide is a raised rail rather than a slot. It was conducted indoors on portable oval tracks and I can only imagine the sound and smell that must have ensued. It all seems somehow seems very 'gentlemanly', and very 'British'.

The engine was fully described over three issues and was fully fabricated; that is, no castings were employed. The transfer system is also unusual. An undercut 'transfer belt' is fed by five tiny semicircular channels arrayed around the front of the lower cylinder. These are formed by pressing an aluminium plug into the bored cylinder, then drilling blind holes to the belt height at the intersection of the two metals. As the aluminium is softer than the steel cylinder, any wandering of the drill will be towards the plug, and thus safe. The rest of the design is quite conventional.

Weaver's design was published with a flywheel, but I'd seen an example of this engine doing a good impression of a Mills .75 at our local free flight field - that is, starting on the first flip and swinging a large prop at whatever rpm the flier wanted; from a powerful two-stroke to a comfortable, under-compressed, rich, low-rpm four cycle. The builder was none other than Russell Watson-Will, the designer of the boxer diesel that also appears in this book. That's his second Weaver at the head of this page, and it was he who convinced me that hogging a crankcase for the Weaver from a solid block was no big deal. He was right and I ended up building three of the things, curing any apprehension I had over this construction method. We hope this re-draw of the Weaver plans prompts others to have a go too. " 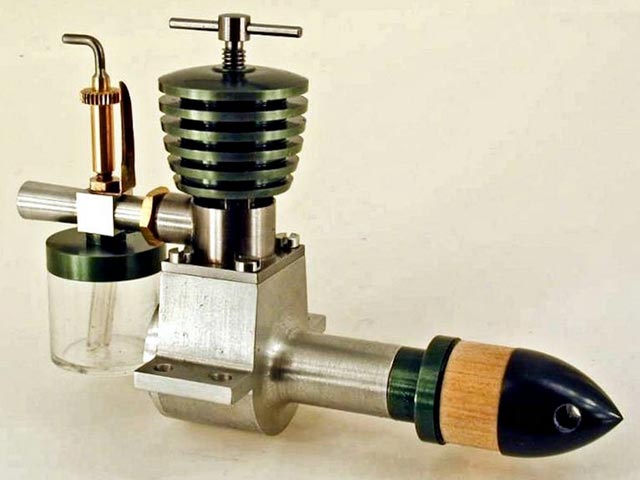