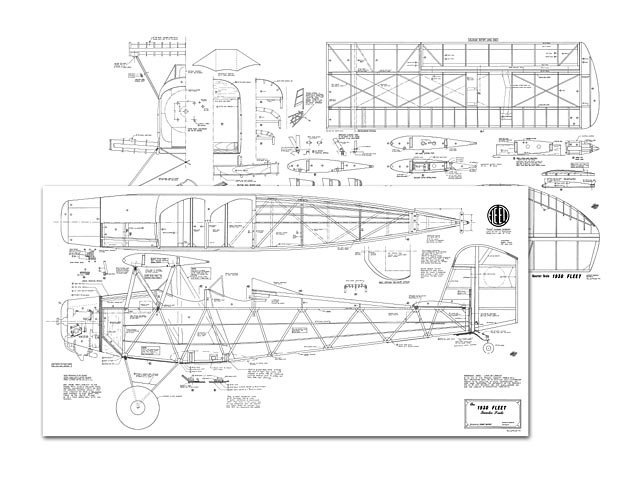 If this is your first venture into the world of Ouarter Scale, you are about to embark in a whole new world of Radio Control building and flying, unlike anything you've experienced before. You will find, as you near completion of your Fleet, that you'll begin to relate to it not as another model airplane, but more as a miniature aircraft; sort of a small version of a full-sized airplane.

When the time comes to make that first test flight, a feeling of excitement and exhilaration will engulf you that you have not experienced before with any of your smaller models. Very positive, deliberate control movement will be required rather than slight stick pressure. The airplane's response to your commands will likewise be very relaxed, yet deliberate.

Because of its size and mass, the airplane's flight will seem very slow and docile. Yet, the Fleet is fully aerobatic. The maneuvers, however, are much more open than the smaller models. Finally, the landing will have you absolutely breathless with its realism.

Welcome to the world of Quarter Scale, the latest in the State of the Art of Radio Control. Of course, if this is not your first venture into the large aircraft, I'm sure you'll agree with our claim and I know you will be pleased with the way the Fleet goes together and flies.

The Quarter Scale Fleet was designed for the average sport flyer with a limited building and flying background. Construction is simple and straightforward. Flight trim adjustments are not critical. Flight characteristics are slow and docile. The airplane is nearly stall proof. It has no bad habits, such as dropping a wing on final because of flying too slow.

The airplane was designed with the Quadra in mind, knowing full well the engine's tendency toward excess vibration especially at slow speeds. The airframe is light yet strong. Because the airplane's slow air speed, the air loads on the flying surfaces are not excessive and any medium-sized servo will adequately drive the surfaces through any maneuver.

While one servo will drive both ailerons, the plans show installation of separate servos in each wing for simplicity in disconnecting wire plugs at the junction of the wing and fuselage, when dismantling the aircraft as opposed to disconnecting a mechanical linkage.

The Fleet is designed for easy transportation by making all four wing panels and both tail surfaces easily removable. Disassembled, the model will fit in a typical compact car.

Prior to beginning construction, there are a few things you should know which will help you in building a better model easier. Construction of the Fleet is quite straight forward and easy. However, study the plan, become familiar with the kit parts. Study the views, sections, photos and illustrations. Scan the instruction booklet and develop and understanding of the construction sequence.

While none of the construction is difficult, take your time, double-check the fit of each part prior to assembly and always check alignment of each component and sub-assembly relative to the aircraft as a whole.

There are four areas in the construction of the 'Fleet where care and caution will result in trouble-free trimming and flight performance.

These procedures will be explained in the assembly instructions.

To help the builder in interpreting the plans and components, all the parts are numbered in the parts list. The parts are also identified by a circled number on the parts diagram and wherever they are shown on the plans. Reference will be made to these parts by their numbers in the assembly instructions. Also, reference will be made to the various views and section by their assigned Letters in the square boxes..."

Quote: "Hi Steve, Here is the Concept Fleet Biplane 1/4 scale kit plan, with manual and 2 pages of notes taken from a build of this model. Only parts shown on the plan are full size." 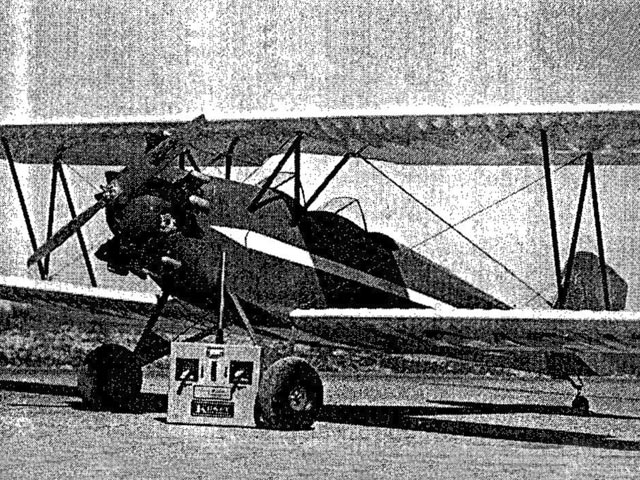 Fine and clear restoration work, thank you Zipman. I was interested to see other Fleet designs also by Mr Bukolt, the 49in sport-scale oz5481 and the 56in 1/6th scale oz12788.
It's great how organised information is in Outerzone. It's nothing revolutionary but it's so well taken care of (curated, as it's now posh to say) that it makes exploration work so well. By the way, I'd suggest the Editor in oz12788 would be better changed to Concept Models for tidiness :)
Miguel - 28/03/2022
Thanks Miguel. Good point, have set oz12788 now to show publisher (ie 'from' in the datafile section) as Concept Models.
SteveWMD - 28/03/2022
I have a question which may be considered dumb by some, why a lifting section tailpane with symmetrical wing sections? Help please.
Radley - 08/04/2022
The lifting stabilizer, another can of worms. The original Fleet had a flat plate stab, like most aircraft of the times. But when it developed a reputation for tail heaviness, an airfoil was added to cure the problem. It didn't help, but the fin was enlarged also, which helped spin recovery. So if you want scale accuracy, the airfoil is correct. Lots of models brag on their "lifting stabilizer", but it's all bravo sierra. When trimmed for normal flight, the stabilizer lifts DOWN, not UP. The famed Telemaster claims all kinds of advantages for it lifting stabilizer, all BS. It flies like it does IN SPITE of its lifting stabilizer. To see an example of a lifting stab done right, see a picture of a later F-4, whose stab is mounted upside down in order to give more lift and enable a tighter turn, important with a Mig on your tail.
Doug Smith - 08/04/2022
"When trimmed for normal flight, the stabilizer lifts DOWN, not UP" - Doug... I suspect your visualization of the lifting stab might be a bit askew. Seems to me that you are interpreting the nose of a plane going down because of the lifting stab as a sign that its lifting down. The idea is for the stab to lift the tail, thereby tilting the angle of attack of the plane down (i.e. nose down). The main reasoning is to combat the ballooning that occurs as a plane increases speed, minimizing having to re-trim, especially with flat bottom airfoiled aircraft (hence Radley's questioning its use on an airplane with a symmetrical airfoil)
RC Yeager - 08/04/2022
A long discussion here: https://www.rcgroups.com/forums/showthread.php?2058765-Lifting-Stab-Please-help-me-understand
pit - 08/04/2022
Add a comment