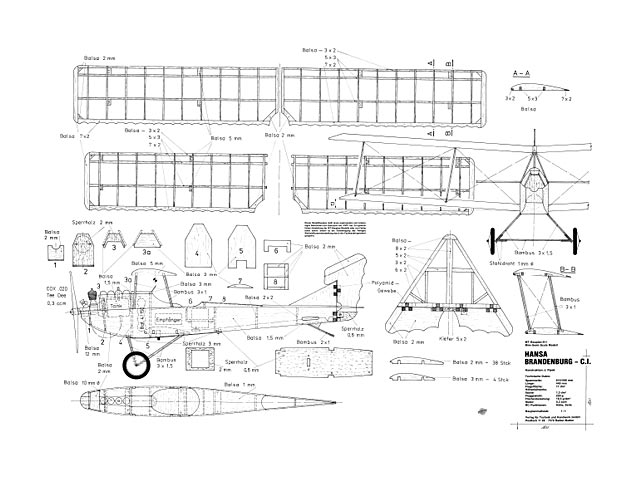 Quote (google-translated from the German): "Today's mini and micro systems are most likely predestined for small models. Unfortunately, little use is made of this option. For this purpose, the tiny servos are built all the more directly in front of the ailerons of large models or even in the vertical tail fins of tall gliders, which is very beautiful and impressive, but could be implemented just as well with conventional and tried-and-tested linkage via large servos in the fuselage.

Remote control of small or very small models: Micro servos and micro receivers are irreplaceable for this purpose and there are no alternatives here. Such models include the 'Hansa Brandenburg', a 1:20 scale replica, designed for the Cannon RC system.

The model was not convincing with the CO2 engine that was installed first, the engine running time was too short. In short, that's why the Cox Tee Dee 0.33 cc was mounted, actually for this model too powerful an engine. The flight characteristics are now perfect.

The Brandenburg flies stably, realistically and is very manoeuvrable. A few loops lined up, inverted flight, spins, turns in between on the 'five mark piece'. You can fly anywhere, but it mustn't be too windy, the double-decker with its low wing-loading needs calm air.

It is almost superfluous to write that the Brandenburg only flies well if it is built cleanly and very lightly.

The fuselage: This consists of the two 1.5 mm side parts and frames 1-8 glued in between Frames 3 and 3a and balsa 1.5 mm are used to build the removable cover over the tank compartment. In the lower area there are 3 crossbars made of 3 mm plywood as landing gear mounts and mounts for the lower fuselage cover (plywood 0.6 mm with small wood screws). We glue a balsa block to frame 1 and work it into the fuselage contour.

We make the struts of the canopy out of 3 x 1 mm bamboo (cut from bamboo sticks that can be bought in garden shops). These struts are glued to the fuselage and to the central rib of the upper wing (5 mm balsa), see drawing. The landing gear legs also consist of bamboo strips..." 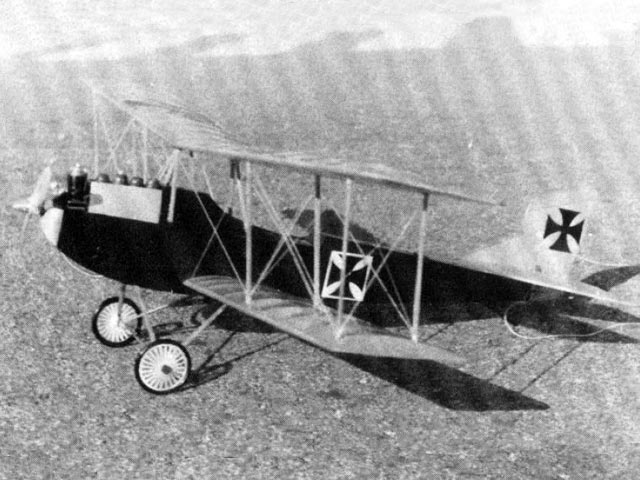