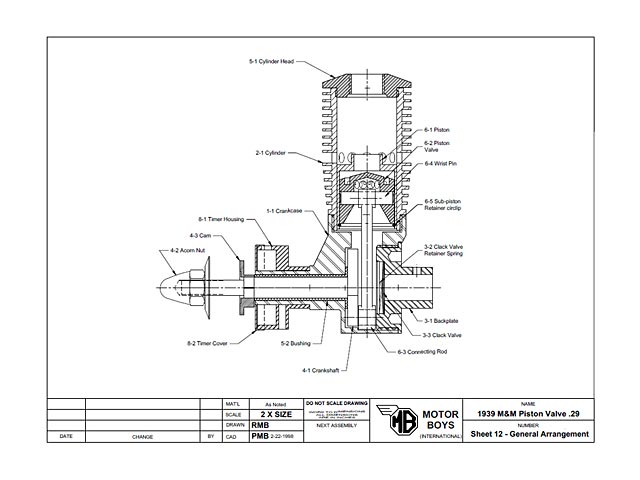 The M&M engines were produced by the M&M Model Wheel Co. located at 325 North 79th St. in Seattle Washington. M&M air wheels for gas models are probably better remembered than their engines.

In 1939 M&M completely redesigned their product and introduced the M&M Piston Valve Motor having a displacement of .292 cu. in. The price was $16.50. This was a unique engine having design features far different than the conventional engines of 1939. It was the unique features that attracted the Motor Boys attention to this engine. These important features are:

1. A piston valve for transfer of fuel/air mixture from the crankcase to the cylinder. This is similar to the Atom .09 engine introduced in 1940.

2. A disk valve (or clack valve) in the crankcase to admit fuel/air mixture from the inlet venturi into the crankcase. This valve operates on differential pressure between the crankcase and the venturi.

3. A fuel adjuster which is a 1/16 dia. brass tube, closed at the top and open at the bottom to admit fuel from the tank. A flat was cut on the side of the tube from the bottom to a .020 dia. hole in the tube that was aligned with a hole in a spray bar that held the tube. Fuel flow, from zero to full, was controlled by rotating the tube through about 90 deg.

These three features were the subject of much discussion among several Motor Boys who believed that it would be difficult to run the M&M. We were all wrong.

The Piston Valve Motor was only offered in 1939. In 1940 M&M offered an engine similar in appearance to the 1939 model, but it no longer had the piston valve. Production apparently ended with the 1940 model. Ads in the May 1940 and May 1941 issues of Model Airplane News promote sales of air wheels but do not mention an M&M engine.

Bert Striegler had a 1940 M&M engine and he made sketches of the parts common to the 1939 model. Ted Eticknap provided pictures and information from a complete 1939 model in his collection. This provided the basis for the Motor Boys Drawings of the M&M. They are believed to be an accurate representation of the original 1939 model.

M&M engines have been built by Bert Striegler, Don McClusky, David Owen, Ron Chernich, Ken Croft, and Roger Schroeder. The original castings were probably made in permanent molds. The Motor Boys used sand castings. All other parts were according to the original design.

All the builders were pleasantly surprised to find the M&M was easy starting and running. It is a strong and smooth runner. " 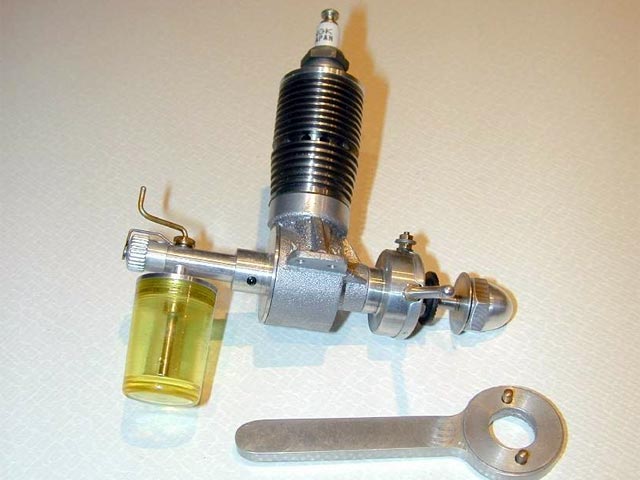