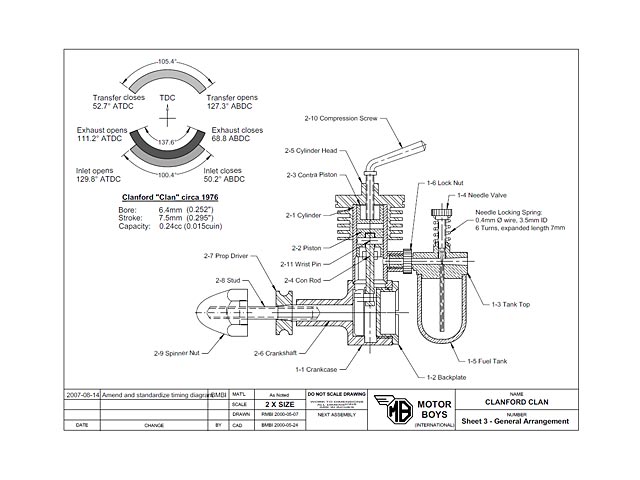 Designed by Mike Clanford. Published under Motor Boys International. Was also available commercially, in the 1970s.

Quote: "The Clanford Clan was a sub-miniature compression ignition engine manufactured briefly in England, circa 1976, under the direction of Mike Clanford, he of "A-Z" fame. It was a tiny side-port design featuring a barstock crankcase with a plastic injection moulded tanktop/venturi assembly, and as you can see, came in a variety of colors. Tiny diesels are tricky beasts, both to make and to operate. With the Clan, this latter aspect was compounded by an occasional manufacturing defect which prevented transfer, so if you had one and could not get it to run, it may not have been your fault!

However, as it appeared to possess an elegant if deceptive simplicity, we drew a set of Motor Boys Plans for it way back in the dying days of the last century. What with one thing and another, none of The Boys ever got around to building one from the plan. But a few plan sets have been sold and I'm absolutely tickled pink that MEN Member, Mark Lester, (whose work has appeared here before) has completed a running example. I asked Mark if he'd share some notes on the experience with us. The remainder of this page describes his trials, tribulations, and recommendations.

Building the 0.24cc Clanford Clan, by Mark Lester: My Clanford Clan 0.24cc was made from the MBI plans, assisted by hints and techniques from the MEN web site and advice from other experts. The process took about three years and came near to being abandoned after having lapped about four cylinders and five pistons and still getting nowhere. Then I saw an article in Sam Speaks (SAM 35 newsletter) which featured a 0.25cc diesel by our very own engine maestro, Normal Fallowes. So I gave him a call and he generously sent me a few tips which helped me complete a decent cylinder/piston combo. I'm pleased to pass on the experience and hope these notes help others building this, or other small diesels..."

Quote: "Not recommended for first time builders – the fits need close tolerances without binding for small motors – and this one is pretty tiny. Ed," 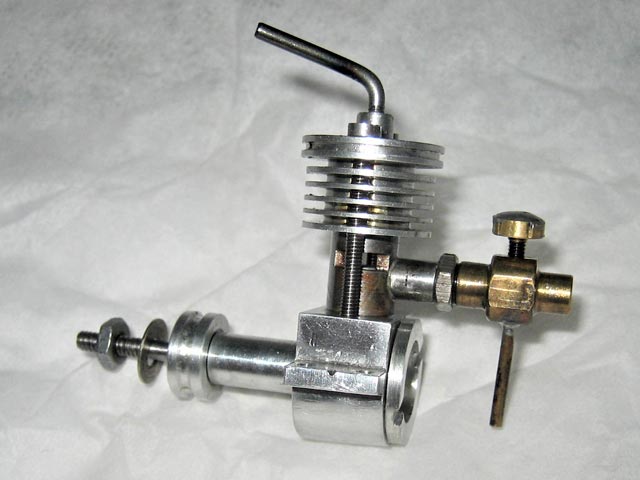