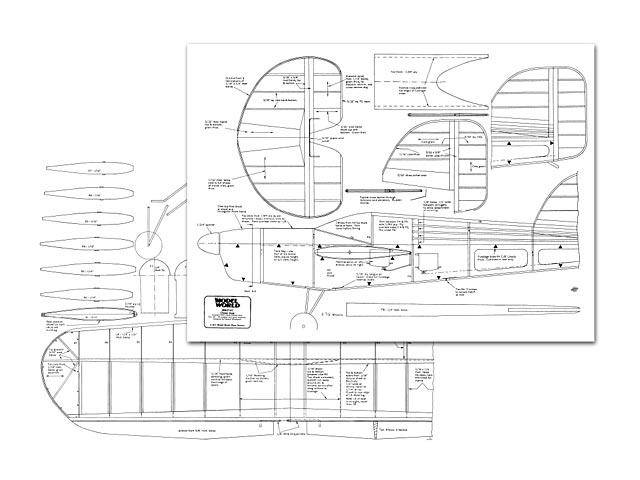 Some years back, I spent many happy hours with 'Holi' - a small hotrod published in RCMW that keeps reappearing as folk realise just how much fun you can toss into a small car. Economy was achieved by using 36 in long spars; honest handling came from the low aspect ratio wing for good low speed manners, while 'adequate' controls put the snaps and spins back. One thing lacking on Holi was curves - drawn with pencil on paper; the airframe wasn't prone to excessive curviness.

Then I discovered CAD! Computer Assisted Drafting means never rubbing out lines again! Teach myself CAD involved putting Holi's shape into CAD - then changing it. Snips when the machine tells you the area of, say, the fin. Change the shape, tell Fred (the computer, don't ask!) to calculate the new area. If it matches, fine. If not, fiddle with it some more until it does.

And now for something completely different! Art Chester's 'Jeep' racer has always fascinated me - but he made life difficult for modellers down the road? Though the aircraft is easily recognisable, it's all odd shapes and angles. A week of reading the manual, and I had a Holi-sized Jeep-ish plan. Might as well build it now!

Okay - you're still here. Good, let's run through the building sequence - I'll leave you to the details. If I have to spend three paragraphs explaining the best end of a knife to hold, maybe you better come back later. A one-piece airframe means you don't have to fret about drilling for bolts and dowels, but you do need to arrive at a point with the big bits ready to meet socially.

Wing: There is a slight double taper on the LE, while the TE taper is all on the ailerons. This yields a straight aileron hinge line, and all ribs are identical aft of the spar. The rib profile was altered ahead of the spar, to give the forward taper. As there aren't that many ribs, cutting them out is a trivial chore.

Steve Kerry and myself developed the surface spar over a lot of e-mails. Steve came up with the idea of putting it on the top of the ribs, reasoning that spars should be as far apart as possible, while I tossed in tapering it. Instead of 1/4 x 1/8 spruce under the LE sheet, by using 1/2 x 1/16 spruce glued to the back of the LE sheet all the spar material is as close to the surface as it is ever going to be.

There's a lot of wood in the tips; hence the thin core to give the shape and a couple of laminations to give some edge thickness. With CA glue, it is hardly a long job and weighs much less, while being stronger, lighter and more stable than thick sheet.

Once you get that far, remember that the aileron servo is offset to starboard, so fit the torque rods accordingly. Carving the ailerons requires a little attention to making sure you get the changing taper correct, but it is nothing that care and skill can't take care of..." 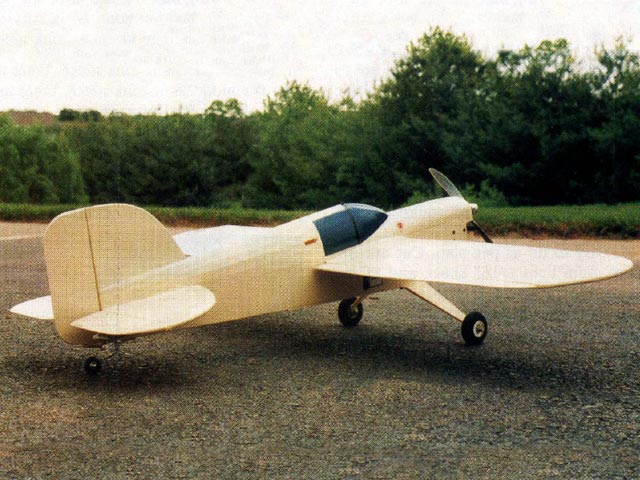