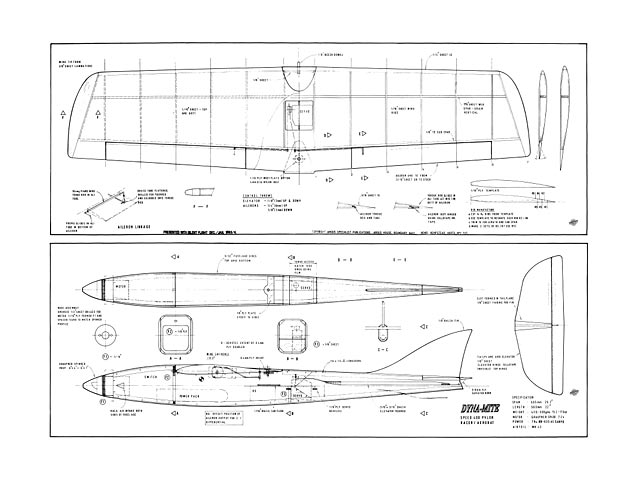 Dyna-Mite was designed as a follow on from my first Speed 400 Pylon racer design, the BEFA Racer. lessons learned from this earlier design have been incorporated with other ideas to produce this new design. For the Speed 400 UK Rules the 7.2v motor was retained, but the V-tail for aesthetic reasons has been replaced by a shark-like fin.

The model is a little smaller overall, with the wing chord reduced and the airfoil section another from the MH range. MH43 is the 'in' section used on the fastest Speed 400 model in Germany, the Bonsai.

Construction follows a traditional format with a simple to build fully sheeted flat bottomed wing. Although the wing has a tapered planform all the wing ribs can be cut using a 1/16 plywood template.

The plan is self explanatory but for the benefit of the builder as suggested construction sequence is detailed below. As the total cost of balsa sheet and strip will be less than £5.00 perhaps 2 could be built at the same time. Time will be saved if a 'kit' of parts is made before assembly is started.

Building: Fuselage: 1. Cut out both sides and PVA glue the 0.4mm ply doublers. 2. Pin 1/4 x 1/4 triangular stock down onto the fuselage sides. 3. Taper rear of longerons for joining the two sides. Mark the elevator servo rail positions. 4. Epoxy formers F2 & F3 to one side_ Make sure that they are square. 5. join other side to F2 & F3. 6. jig using 1/2 x 1/2 each side of the fuselage. Pin to the board and epoxy Fl to the nose as an oversize assembly. 7. Pull tail together and cyano - check for squareness. 8. Add Servo Rails (1/16 ply) and wing mounting ply plate. 9. Sheet bottom of fuselage (cross grain) and fuselage top using cyano. 10. Tack glue Servo access hatch to fuselage. 11. Sand complete fuselage to profiles shown on sections A-A to C-C. Use spinner to get front of fuselage to correct size and profile. 12. Make up elevator push-rod to suit Servo location.

Tailplane & Fin: 1. Cut tailplane and fin to plan profile. 2. Cut off elevator and sand to profile shown on plan. 3. Round off edges of Fin. 4. Pre-shape fairing and Cyano to tailplane. Cut slot in fairing for fin. 5. Both Fin & Tailplane are covered before being glued to the fuselage.

Wing: 1. Pin down bottom sheet with packing at LE to follow airfoil profile. 2. Glue ribs into position on bottom sheet and 1/8 sub LE using cyano. 3. Glue down TE sub spar & sand to suit Rib (Airfoil) profile. 4. Glue into position 1/8 sheet webbing making sure of a tight fit. 5. Glue top sheet, hold down with pins or weights. 6. Glue the 1/4 sheet LE using PVA. 7. Make up tip blocks and glue to wing. 8. Cut from TE stock or 3/16 sheet the wing TE. Glue to the wing at the centre section and adjacent tip block. Do not use glue on the aileron section..."

Quote: "Hi Steve, Thank you for creating and running such a fabulous site. I've been enjoying it immensely over the past year or so and it has inspired me to get back into building after a 25 year absence. Anyway, while trawling through my archive I came across some magazines which have a few plans not currently on Outerzone, so I thought I'd try to rectify that. Here's my first effort," 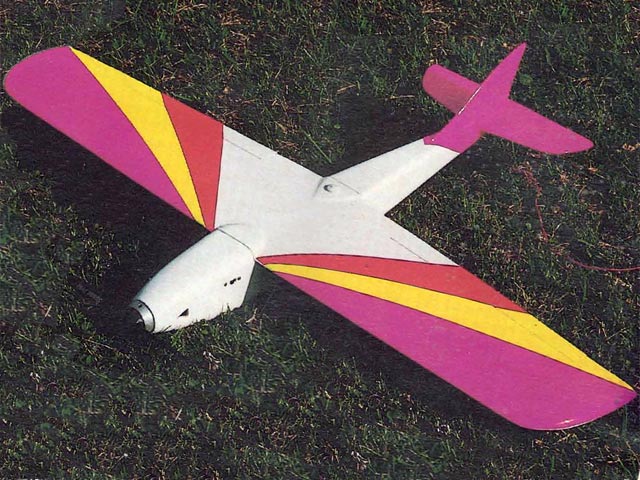