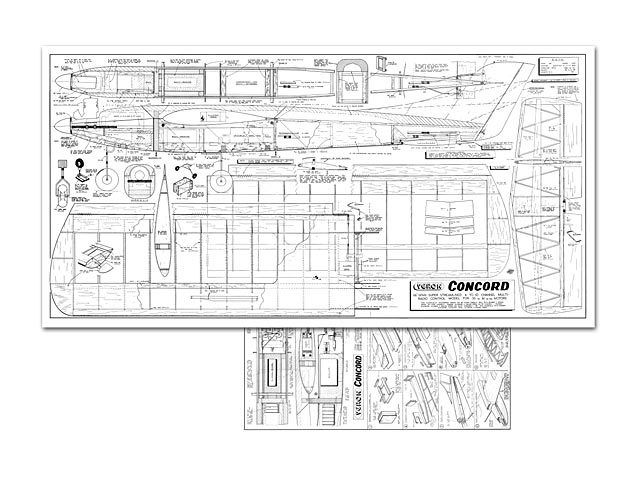 Quote: "This is the famous Concord multi aerobatic aircraft designed by Phil Smith and kitted by Veron some 50 years ago. It is a beautiful aesthetic model, a little complicated to build from plans. Almost all Phil Smith's designs were made with lots of little parts and big balsa blocks. The formers are not on the plan but they can be easily drawn since they have no special shape. The wing ribs are, fortunately, on the plan making things easier. The Concord is a beautiful different model which deserves some updating to more modern equipment and perhaps a simplified structure. Worth building and flying. By the way, the original prototype was flown by Phil when he was invited by the Shah of Iran to make model flying demonstrations some time ago. Good luck and best wishes from Colombia, EDUARDO"

Everything about this £11.15.6d. kit seems to emphasise both completeness and bulk. The 66 in span with a 15 per cent airfoil thickness measuring 12-1/2 in chord (giving an effective area of 728 sq in) makes it quite a sizeable model though not by any means over large when compared with other multi-channel designs.

In one respect it is smaller than most and this is on the 52 in overall length. In fact the short coupled tail surfaces are quite a distinction. Concord loses nothing to stability, in fact it is rock steady in all conditions and will execute extremely tight looping manoeuvres by virtue of the short fuselage.

The plan illustrates installation of British Climax servos but our model as made by Michael Charles easily accepted Remcon 10 channel receiver, Deac pack and four Bonner Transmites in the fuselage. The servos were fitted at the relatively aft position shown on the plan and balance came out perfectly as recommended with a Merco 61 in the nose.

Prefabrication of the fuselage block parts is a great aid; but as we have already commented, construction of the tailplane is a little tiresome with its 57 separate parts (not 90 as erroneously stated last month).

First attempts at a test flight were frustrated when rudder kept coming in as soon as the Merco 61 was revved-up. A loose PC board in the Remcon Rx was suspected but this was not the primary cause. 1/4 in off the Keilkraft 12 x 6 in nylon propeller cured the out of balance effect which was creating vibration but there was still a degree of interference remaining, due perhaps to unequal blade area. We changed to a Topflite 12 x 6 in wooden propeller and the troubles disappeared.

First test flight was made by Lt./Cdr 'Ernie' Green USN in a 15 knot wind. The 7 lb model lifted off after 50 ft of natural run at slightly less than full power. Immediate impression is one of controlled speed and rock steady stability.

Concord sits in the air beautifully and does not have that characteristic of being marginally distant from impending disaster which is common to many another faster design. That the pilot was happy with it was evident when after only three minutes in the air the Concord was going through inside and outside loops, rolls in either direction, inverted flight, reversals and Immelmans.

Approach to landing on up trim with low throttle was a 'natural'. The fixed nose wheel is certainly no handicap, the rudder will air-steer on the ground but the makers advise extra rudder area for those who want to spin, so would we.

Another point in Concord's favour for stability was that the elevator servo went 'trimmable' (non-neutralising) - another job for radio expert Roy Bale to sort out for us. Ernie brought the model all the way down solely on the trim servo.

Points to watch: Brace the undercarriage legs, arrange easy access to the tank which must have extensions fitted to the tubes and the internal flexible tubing and pick up weight replaced (ours fell apart and the tubing kinked), fix the tailplane and avoid all metal to metal linkages.

Verdict: Excellent value and a design that can be thoroughly advised for the first approach into multi, it could even be flown rudder only - but why? An 'economy' kit, less wheels and accessories might be a good thing for those with less to spend." 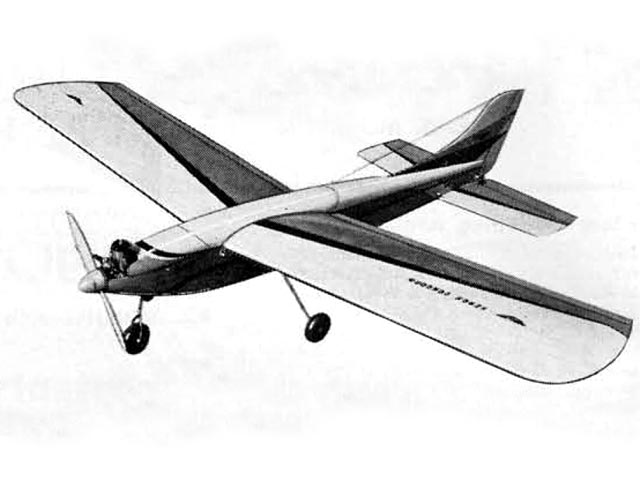