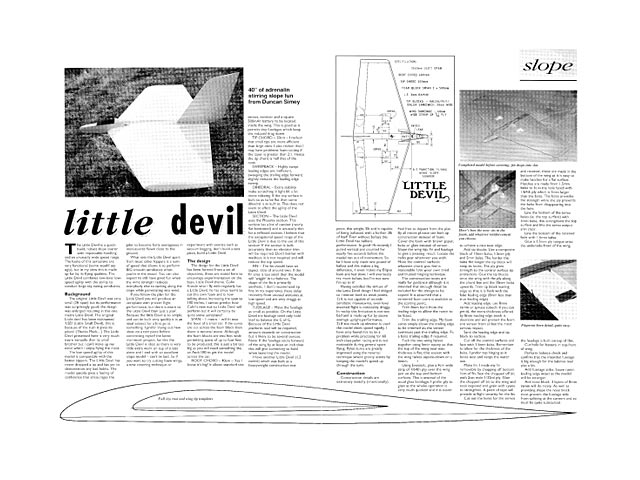 The Little Devil is a quick-build, robust slope soarer with impeccable handling and an unusually wide speed range. The looks of this aeroplane are very functional (some would say ugly), but in my view this is made up for by its flying qualities. The Little Devil combines low-level low-speed agility with the ability to conduct large sky eating aerobatics.

Background: The original Little Devil was very small (2ft span) but its performance was surprisingly good, the design was enlarged resulting in this one metre Little Devil. The original Little devil has been nicknamed 'LSD' (Little Small Devil), this is because of the rush it gives its pilots! (Thanks Mark...) The Little Devil presented here is very much more versatile than its small brother but I can't make up my mind which I enjoy flying the most.

The low speed agility of this model is comparable with the better kippers. The Little Devil has never dropped a tip and has yet to demonstrate any bad habits. The model quickly gives a feeling of confidence that encourages the pilot to become fairly outrageous in manoeuvres flown close to the ground.

What sets the Little Devil apart from most other kippers is a turn of speed that allows it to perform BIG smooth aerobatics when you're in the mood. You can also expect to still have good fun when the wind strength reduces everybody else to tacking along the slope while penetrating into wind.

If you follow the plan for the Little Devil you will produce an aeroplane with proven flight performance. but there is more to the Little Devil than 'just a plan'. Because the little Devil is so simple and can be built very quickly it is an ideal subject for a first go at something. I prefer trying out new ideas on a test piece before committing myself the latest mammoth project, for this the Little Devil is ideal as there is very little extra work on top of a test piece and I end with an excellent slope model - can't be bad. So if you want to try cutting foam wings, a new covering technique or experiment with exotica such as vacuum bagging, don't build a test piece, build a Little Devil.

The design: The design for the Little Devil has been formed from a set of objectives, these are stated here to encourage experimentation on the basic Little Devil theme. Colin Kneale who I fly with regularly has a Little Devil, he has since learnt to cut this own foam and is now talking about increasing the span to 100 inches, I cannot predict how Colin's new not-so Little Devil will perform but it will certainly be quite some aeroplane!

SPAN: 1 metre. Will fit into the boot of a small car. If the cores are cut across the foam block then there is minimal waste. Although the foam blocks are two feet wide permitting spans of up to four feet to be produced, this is just a bit too big as you will need something like an Audi 100 to get the model across the car.

ROOT CHORD: 40cm. Yes I know it's big! It allows standard size
servos, receiver and a square 500mAh battery to be located inside the wing. This is good as it permits tiny fuselages which keep the induced drag down.

TIP CHORD: 20cm. I reckon that small tips are more efficient than large ones. I also reckon that I may have problems foam cutting if the taper is greater than 2:1. Hence the tip chord is half that of the root.

DIHEDRAL: Extra stability make scratching in light lift a bit more relaxing. If the top surface is built so as to be flat then some dihedral is in built in. This does not seem to affect the agility of the Little Devil.

SECTION: The Little Devil uses the Phoenix section. This section has a lot of camber (nearly flat bottomed) and is unusually thin for a reflexed section. I believe that the exceptional speed range of the Little Devil is due to the use of this section. If the section is built accurately then no elevator trim will be required. Don't bother with washout, it is not required and will reduce the top speed.

FIN: The fin should have an aspect ratio of around two. If the fin area is too small then the model will 'wiggle' in turbulence. The shape of the fin is primarily aesthetic. I don't recommend tip fins, in my experience these delay recovery from unusual attitudes at low speed and are very draggy at high speed.

FUSELAGE: Make the fuselage as small as possible. On the Little Devil the fuselage need only hold lead to balance the C of G. Because of the Little Devil planform lead will be required, amount depends on construction but is likely to be several ounces. Note: If the fuselage sticks forward of the wing by at least an inch then this will give something to hold when launching the model.

I have another Little Devil (1.2 metre) which was built as a heavyweight construction test piece, this weighs 3 lb and is capable of being ballasted with a further 3 lb of lead! Even without ballast this Little Devil has ballistic performance. In good lift recently I pulled vertical and counted for nearly five seconds before the model ran out of momentum. So far I have only made one pound of ballast and this makes a big difference, it even makes my Ellipse look and feel slow; I will eventually try more ballast, but I'm not sure I'm up to it!

Having extolled the virtues of the Little Devil design I feel obliged to mention both its weak points. I) It is not capable of outside acrobatic manoeuvres, even level inverted flight is noticeably draggy. In reality this limitation is not too bad and is made up for by above average upright performance. 2) If too much up elevator is used the model sheds speed rapidly. I have only found this to be a problem while practising for 60 inch class pylon racing and is not noticeable during general sport flying. Pylon turns are greatly improved using the reversal technique where gravity assists by keeping the model's speed up through the turn.

Construction: Construction details are extremely sketchy (intentionally). Feel free to depart from the plan. By all means please use built up construction instead of foam. Cover the foam with brown paper, balsa or glass instead of veneer. Shape the wing tip, fin and fuselage to give a pleasing result. Locate the radio gear wherever you wish. Make the control surfaces whatever chord you feel is reasonable. Use your own tried and trusted hinging technique.

The construction notes are really for guidance although it is intended that enough detail be included for the design to be copied. It is assumed that a veneered foam core is available as the starting point.

Tack the two wing halves together using 5min epoxy so that the top of the wing near max thickness is flat, this easiest with the wing halves upside-down on a bench. Using Evostick, glue a 4cm wide strip of 1/64 ply over the wing join on the top and bottom surfaces. This is instead of the usual glass bandage, I prefer ply to glass as the whole operation is very much quicker and it is easier to achieve a nice neat edge..." 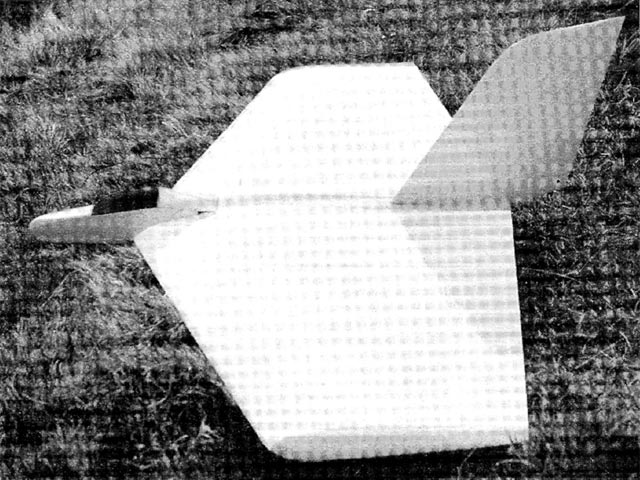 Hi Outerzone, many thanks for your great work with your excellent page! Please find in the attachment the airfoil coordinates for Little Devil (oz13632). I digitized the coordinates from the plan and stored them in the common Selig format. For further calculations, i.e. with xfoil or xflr5, the coordinates are already well smoothed. While dealing with this airfoil I figured out, that the airfoil seems to be very close to a Horten t=8% f=2.7%. It would be very nice if you could add the file to the plan page ID=13632. Greetings from Germany,
Martin Huebner - 22/02/2022
I did a quick google for the Duncan Simey Little Devil, and it is mentioned and credited in the pages of the PDF manual for the Dream Flight Weasel-Trek, see https://www.hyperflight.co.uk/products.asp?code=DF-WEASEL-TREK for which, by all accounts, it was the inspiration.
Quote: "Designer's Notes - Evolution of the Weasel: It was back in the mid-1990s that I was approached by a local Santa Barbara RC glider pilot, who asked if I might cut him some one-off foam wing cores based on a flying wing design called the 'Little Devil', by British aeromodeler Duncan Simey. I was presented with the 1994 issue of Silent Flight, which included the build article for this particular model. The tapered, ultra-wide chord of the Little Devil design immediately caught my eye - it looked fun! I was in High School at the time on summer break with plenty of time to spare, so I decided to give it go.
The original build article called for a plywood-sheeted wing, which seemed quite heavy for our light coastal breezes. To reduce weight, I used a packing tape-covered foam wing with balsa sheet control surfaces for simplicity.
The foam material was scrounged from a damaged hot tub cover (I still recall the strong smell of chlorine-saturated foam!). The foam and tape prototype was an immediate success! It flew like nothing else on the slope and outperformed most chevron-style combat wings that were popular at the time. It was nimble, had an extremely wide speed range, could slow down to a kite-like hover in very light wind, and the stout, yet lightweight shape allowed it to take the tumbles. All these attributes allowed me to take more chances, and soon I found myself creating a new style of in-your-face slope soaring. When everybody else was into slope combat at the time destroying servos and airframes left and right, I was enjoying this creative freestyle form of RC soaring; pylon turns around shrubs and small trees, touch and goes off park benches, quick rolls three feet off the deck, grass skimming, hand catches instead of the traditional landing; all became part of the new routine, and my piloting and reflexes improved quickly as a result..."
SteveWMD - 22/02/2022
Add a comment