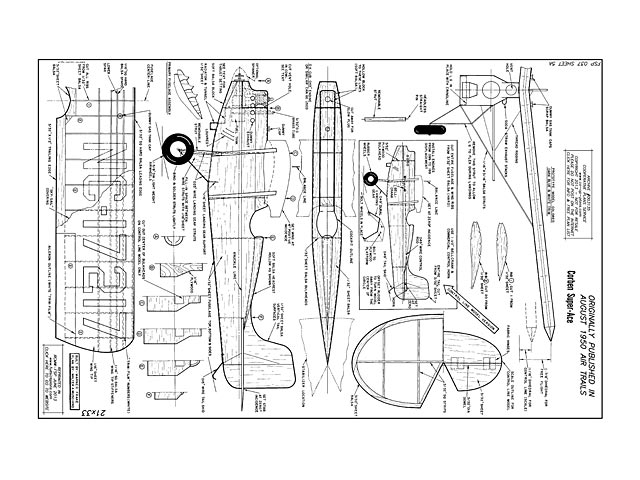 Note this plan is also stamped as Archive #003135 from the Cooperative Plans Service. See their website at www.co-op-plans.com

Quote: "One of the cleanest of the home-bilts, this 1934 lightplane makes fine FF or U-control.

When it comes to free flight scale models, the Corben Super-Ace turns in about the finest performance that can be hoped for. The rigidly mounted high wing and pylon type of fuselage profile coupled with a long landing gear, simple construction and a neat appearance make this job hard for any model builder to resist. The Corben has been a favorite with scale free fighters since 1934, but now it should be more popular than ever with the half-A engines here to stay.

Our Super-Ace is built to a scale of one inch equals one foot, which gives it a projected wing area of 118 square inches, perfect for engines like the OK Cub .049. The Eiffel 400 airfoil was used to obtain a good glide with realistic climb and to insure good weight-carrying characteristics should the model turn out overweight. Our job weighed 4-1/2 ounces.

Before we begin constructing this free flight 'natural,' we must not overlook those who prefer to do all their flying from the end of a line. The plans and article insert describe the minor revisions required to build a control line copy of this famous lightplane.

The outstanding feature of the full-size Corben single-seat lightplane was not the steel tube fuselage, nor the wooden wing structure nor fabric covering but rather the Corben engine. This four-cylinder liquid-cooled power plant actually was a rebuilt Ford Model A automobile engine. It developed 52 hp at 1925 rpm and weighed 217 lb dry. This was one of the first successful applications of auto engines for aircraft use.

Begin construction by cutting the fuselage sides and bulkheads from hard 1/32 sheet balsa. Note that bulkhead B is cut from plywood. Join the fuselage at the rear and install the bulkheads in the locations shown. Install the nuts and bolts on the plywood bulkhead (nuts on the after side) and apply plenty of cement over the nuts to hold them to the bulkhead.

Bend the landing gear to shape and bind and solder the two pieces together. The completed gear is attached to bulkhead C and the sheet balsa landing gear support. Crinoline and plenty of cement must be used. The entire fuselage bottom is covered with 1/32 sheet balsa. Install fuel tank. This can be purchased at your hobby shop or fabricated from very light shim brass. Our tank measured 3/4 in square and seemed an efficient size.

The empennage is the picture of simplicity. Cut the fin and rudder from 1/32 hard sheet balsa. The stabilizer and elevator are made from a simple framework of 3/32 square and 3/32 sheet balsa. This is constructed by pinning the wood directly over the plan on the work table and cementing all joints well. Cover both sides of the framework with Japanese tissue or Sky-Sail. We used Sky-Sail with excellent results. Pin to the workbench and water and clear dope one side at a time to prevent warping. Two coats of clear dope proved satisfactory. Cement the empennage components to the fuselage parallel with the center line.

Medium hard balsa should be selected for the wing ribs. We made our wing in one panel and cut the upper spars and leading, and trailing edges to produce the required dihedral. If you desire, two panels can be constructed and jointed at the center line.

Pin the rock-hard 1/16 square balsa lower spar to the work table directly over the plan. Cement all the ribs to it. The rock-hard upper spars can now be cemented to ribs in the notches provided for them. Add the leading edge. When dry, remove from the table and cement the trailing edge to the ribs at an angle to follow the airfoil contours.

Cement the sheet balsa wing tips in place and add the 1/16 square stiffeners. Sandpaper the entire wing framework lightly and recement all joints. Care should be exercised when covering the bottom of the wing, to make certain that the covering adheres to every rib in order that the true undercamber is maintained. Here again we used Sky-Sail.

Water the wing, then clear-dope three times when dry. The wing on the prototype model was cemented to the fuselage and this method proved successful; however, rubber hands can be used to hold the wing in place. Note the proper incidence.

Fill in the space between the wire landing gear struts with 1/16 sheet balsa. Cement the balsa wing struts in place other than the removable vertical strut. This strut must be removed when flying the model in order to permit the landing gear to flex on landing and not transmit the load to the wing struts, possibly breaking them. Although the landing gear is quite flexible, lightweight airwheels were used effectively.

The upper nose block can now be removed (careful!) from the fuselage. Install the engine with slight down and right thrust. This is accomplished by inserting one brass washer behind the top right engine lug and two brass washers behind the top left engine lug. Hollow the upper nose block so it will clear the engine by at least 1/16. This block is now the engine hatch and can be held in place with dress snaps, or hinged.

Although the prototype Corben Super-Ace model was flown with the hatch in place, it is suggested that ventilating holes be cut in the front and rear of the hatch, or that the hatch be removed when flying in order to avoid the danger of fire.

The general Corben color scheme was all yellow with cowl and upper portion of the fuselage forward of the cockpit black; however, in view of the fact that this is a personal type craft any color scheme that you have in mind can be used. Our model was colored all dark blue with white lettering and trim. Fuel-proof the entire plane once, including cowl interior.

Before flying be sure the model balances at the point indicated. The prototype required slight ballast in the tail. Test-glide in tall grass until a good glide has been obtained; this should be very flat and slightly to the left. The model should climb to the right. When launching, it is advisable to have the wind blowing on the front right quarter of the model in order to achieve maximum performance.

Control Line Corben: The small scale plan insert describes the minor changes required to build a control line version of this famous lightplane. Construction steps are identical to the free flight models except that the tail and control system must be installed before the fuselage top is cemented In place. Notice that the entire empennage is heavy sheet balsa and the entire fuselage construction is 'beefed up.'

We suggest a sheet dural landing gear (as illustrated) which is bolted to a plywood platform which in turn is cemented to the fuselage. The rubber wheels are held in place by 1/18 steel bolts and nuts. Strut material should be cut from hardwood (pine or spruce).

The control line model should be fitted with a Clark Y or symmetrical airfoil. All wing ribs are to be cut from hard 1/16 or 3/32 sheet balsa for extra strength. Solid wing tips of soft balsa are recommended. Set the wing and tail at zero incidence for control line flying efficiency.

Use the scale stabilizer and elevator outlines on the control line model, which will take engines from .099 to .19 cubic inch displacement. And when it comes to painting you can let yourself go! Four or five coats of dope should produce a fine job. Wood filler could be used on the fuselage and empennage if desired.

The fuel tank should be larger than the free flight tank illustrated. In view of the fact thftt the control liner engine run is much longer than the free flight's 15 to 35 seconds, the engine hatch-cowl must be well ventilated or removed entirely when flying the control line job. If the model is light powered and of light weight it can be flown on heavy thread or fish line. The heavier models should use .006 to .008 steel flight lines."

Note: The article text is credited to Warner Frake, which is a pseudonym that was used by Walt Musciano. 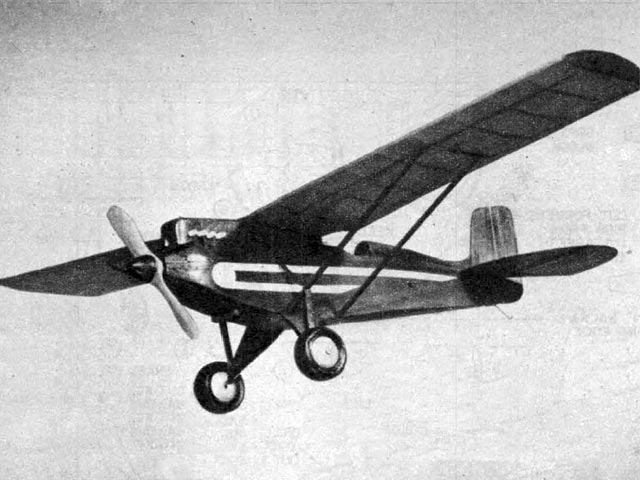