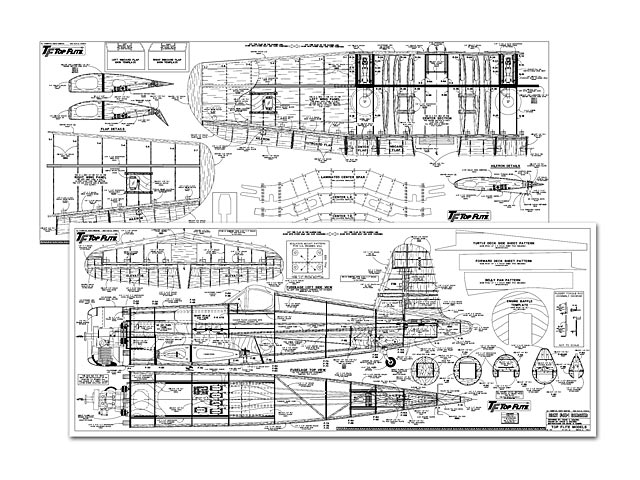 Discontinued kit from Top Flite. For a snapshot of the old listing for this kit on the (now-defunct) Top Flite website, see: http://web.archive.org/web/20171... which also links to kit reviews from RC Report and RCM magazine.

Quote: "Thank you for purchasing the Top Flite Gold Edition Giant F4U Corsair. Since this is a scale model with lots of detail, you’ll find it takes a little longer to complete than the sport models you’ve built before. But since this is a Top Flite Gold Edition kit, it is as easy to build as most sport models. The Top Flite Giant Corsair uses the same materials and standard construction techniques you’ve already become accustomed to. You won’t have to learn anything new to end up with a first class scale model!

Most of the trim schemes you’ll find of the full size Corsair should be easy to duplicate with Top Flite MonoKote film. The Top Flite Giant Corsair is an excellent Sportsman Scale subject. Its large size and accurate scale outline afford you the opportunity to go all out with as many extra details as you like.

DECISIONS YOU MUST MAKE:

We strongly recommend the use of a soft engine mount of some type, to relieve the stresses on the airframe and radio system and to make your aircraft quieter. Great Planes, J-Tec, Soundmaster and others produce soft mounts for large engines. Note: If you are using a gasoline engine, you will need to make sure that your fuel lines and tank are made specifically to handle gasoline.

RADIO SYSTEM REQUIREMENTS: The Top Flite Giant Corsair requires a minimum of 10 standard size servos. Due to the large scale of this aircraft the Giant Corsair requires high torque servos to control the split elevator (2 required), rudder [1 required), aileron (2 required) and flaps (2 required). Standard servos may be used for the throttle, retract valve and tail wheel steering. On our prototypes we used Y-connectors to connect the elevator servos, flap servos, rudder/tail wheel steering and aileron servos.

SCALE COCKPIT INTERIOR: Your Corsair just wouldn’t be complete without the Top Flite Giant Corsair Cockpit Kit (TOPQ8407). It includes the floor, side panels, full laser cut instrument panel and seat. The Cockpit Kit easily installs after the fuselage is completed. The servos and pushrods are located so the cockpit can be installed without any modification.

COMPETITION-MINDED MODELERS: If you plan to enter your Giant Corsair in scale competition (it’s lots of fun and the runways are often paved), this kit qualifies for Fun Scale and the Sportsman and Expert classes in Sport Scale. Fun Scale and Sport Scale have the same flight requirements where you must perform ten maneuvers of which five are mandatory.

If you have never competed in a scale contest, you could start out in Fun Scale. In Fun Scale, the only documentation you need for static judging is any proof that a full size aircraft of this type, in the paint/markings scheme on your model, did exist. A single photo, kit box cover, even a painting is sufficient proof! If you’re interested, contact the AMA for a rule book which will tell you everything you need to know. Look in the back of the AMA magazine Model Aviation for a schedule of events.

The trim scheme of the Corsair on your kit box was inspired by the full scale 'Bayou Baby'. The decal set included with the kit will allow you to quickly and easily duplicate the markings. If you prefer a different trim scheme Scale Model Research offers many documentation packages as a guide..."

I first approached the manufacturer at the 98 Toledo Show and asked if anyone was slated to do a kit review. I received the kit on November 2, 1998 and flew it on February 20, 1999. The colorfully labeled box was 49 x 16 x 6 in and boy, was it heavy!

This is a blown-up version ofTop Flight's popular .60-.90 size Gold Edition of the Corsair. I grabbed the instruction book first and then glanced at the kit. l had already been alerted by Richard Seltzer, the manager at the Hobby Warehouse, to check if the canopy was crushed during shipping since they all were in the kits he had stocked. Sure enough, it was smashed to one end of the box and unusable. A simple phone call produced a bright shiny new one by UPS in three days. Also, a part was missing (the nose ring of the firewall) out of the first production run. (Note: The packaging has since been corrected.)

This is the first in a series to answer the demand for easy-to-build Warbirds as the craze continues and IMAA legal size airplanes are being flown. I was familiar with the Corsair since I had built and flown one from an old Royal kit some 20 years ago and since Corvin Miller, my test pilot, had just completed and then competed with a slightly larger Ziroli Corsair at the 1998 Scalemasters in Columbus, Ohio. Knowing Corvin would fly this plane for the first flight photo shoot, I was going to be interested in his impressions of its flight characteristics.

I found the plans and pictures very helpful, along with the reduced set of plans included in the 59-page instruction manual supplied.

The parts were easy to find using the die-cut layout chart also included in the booklet. The lite ply was of good quality and very well die-cut. The parts were bundled together or in a plastic bag. However, remember to measure the wood before you assume that you have the correct piece of wood in hand by the old eyeball method. There are some weird size pieces, so measure twice and cut once. After saying all this, this is definitely not a beginner's kit.

Construction: You need to know up front that this kit is designed for a set of 180° rotating Robart retracts and retractable tail wheel, as well as a US41 or G-62 engine for power. There are no alternate plans for a fixed landing gear arrangement.

I started with the fuselage first and went back and built the tail feathers as they suggested and then on to the wing. I used CA on most of the construction or 5-minute epoxy in high strength areas. I also did some strengthening in some areas that I felt were inherently weak. I will mention these as I go along with the construction.

The fuselage is built top half/bottom half right over the plans covered by the new plan protector film; I love this stuff, nothing sticks to it. Make sure you read and look before gluing since there are some new construction techniques during assembly. The first thing I noticed was that the tail wheel mount was over-built and added unnecessary weight to the rear of the CG.

It took 3 lbs of lead screwed to the firewall, as they suggest in the instructions, to balance this model slightly nose down with the wheels retracted. You need to decide at this stage too, while the fuse is in the bones, if you are going to use fiberglass pushrods or the solid metal 4-40 rods and tubes supplied by the manufacturer. Also, if you are going to have a full cockpit and pilot, just tack-glue the cockpit floor in place since it has to be removed later.

This is also the time to make sure your tail wheel retracts and the steering cables work by mounting all the servos for a dry run test before the outer skins go on. I had to remove the rear cross bracing as it was in the way. I fuelproofed the tank mounting area by closing off the area between F2A and F3A and painting it with alcohol-thinned 5-minute epoxy where fuel leaks can occur.

The instructions for the Isolated Engine mount #GPMG2000 on the plans were not real clear, so make sure to take measurements for the thrust line off the plans. The plane has right thrust built into the kit. I used the plastic engine standoff mount supplied with the US41 engine as a template for drilling the engine mounting holes but I also added three pieces of 3/4 in spruce triangle to the engine mount to give it some added strength..." 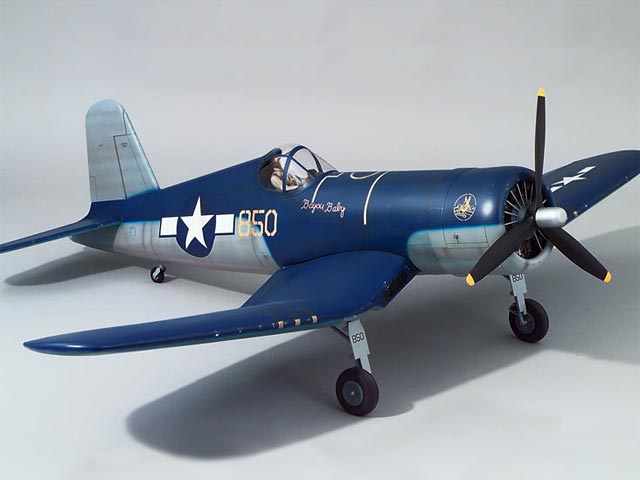 Boy, this is one helluva project, but if built and actually finished, has the potential to be a winner. Yes, I flew a smaller version an it flew beautifully, got a standing ovation at an airshow. The first thing I would do is try to find a canopy and maybe a cowl, then take out a Home Equity Loan to buy the required balsa. This one was sold as a kit, with the important parts precut, but look in the booklet, every part is drawn out for you, including the all-important dimensions. You can scale it up to get your patterns. I didn't say it would be easy, but if I could do it, so can you. I covered the wing for a club member, not easy with MonoKote, but a separate piece for the gull wing made it possible. The design is waaaay overbuilt, so lightening for electric power would help a lot. Just leave out half the wood and all the heavy stuff, no vibration. Go ahead and start saving up for batteries. Delete the retracts, it flies fine without.
doug smith - 25/02/2022
Add a comment