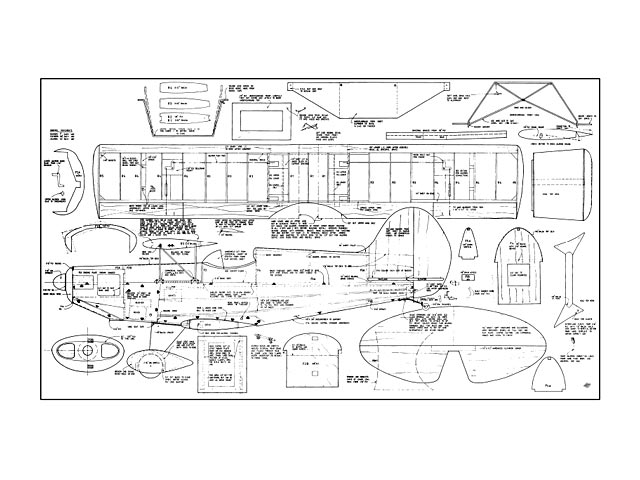 Quote: "THIS SINGLE SEAT aerobatic biplane was designed by the President of the Experimental Aircraft Association, Paul Poberezny, as a school or homebuild project, using any flat four 100-180hp engine. Curtiss Pitts whose single and two seat biplanes are world famous, offered his services as a consultant, thus this is probably the reason the 'Acro Sport' uses the same combination of wooden two spar wings and welded steel tube fuselage that has proven so successful in the Bucker and Pitts biplanes.

The prototype NIAC was test flown on January 11, 1972, just 352 days from initiating the design. There are also 'Super' and two seat versions with increased wingspan.

My model is to 1/6 scale which produces a compact aerobatic model that is quick and economical to build. It is also easy to construct accurately, as the top wing is without sweepback or dihedral, so allowing one piece building on the board. The fuselage has sheet basic side, structure with longerons and stringers on the.outside. The cowling which can totally enclose most 0.25 - 30 engines, has a lift-off top, allowing good access to the engine without having to remove the spinner and propeller so often the case with a complete GRP cowl. The tank is also under this hatch which excludes any risk of leakage into the radio compartment.

The tail surfaces are simply cut from sheet balsa, as the full size is made from steel tube and covered with fabric with a flat section.

Construction: Cut all parts out first. The top wing is built over the plan in one piece, with the trailing edge pinned down flat, and the leading edge packed up. The centre section trailing edge cut-out is made after the adhesive has set. The lower wing is made in separate panels over the plan in the same way as the top wing, but with the front and rear dihedral braces added to one side.

Assemble aileron linkages and join panels together making sure they are aligned correctly. Then sheet the centre and make a cutout for the servo.

The Fuselage: Cut out the sides and add the spruce longerons and the sheet parts to the outsides. Please note the angled razor-saw cuts in the top longerons which allow the double taper to form easily when assembling the sides to the formers and pulling in the rear. These cuts are glued with cyanoacrylate before the covering is applied.

The plywood strut mounting plate can also be used for servo mounting if you wish, so cut out for the servos before fitting. This will often alleviate the need to add nose weight to achieve the correct balance.

The struts are fitted before enclosing the fuselage top and the top wing tried in position to check the incidence. Adjustment can be made if necessary by packing under the front or rear, but may involve resoldering the brace struts to maintain the struts vertically in position. The struts should have 1/2 to 1 inch greater width without the wing so that they have to be pulled in to put the wing on.

A strap-on type manifold can be used and coupled to a remote expansion chamber with silicone tube.

The Micro Mold V8 spats that I used are not quite long enough to be exactly scale, so if you wish to have greater authenticity make them from block balsa and ply.

Colour schemes on the illustrations that I have seen all follow the same pattern, mine is the blue, black, yellow and white of the prototype NIAC. The UK registered G-BJHK belonging to John Kimber is the same pattern as NIAC but I am not sure of the colours as all the pictures 1 have seen have been in black and white.

Covering and finishing I covered my model in Solarfilm, with film trim and enamel paint suitably fuel proofed, not perhaps the best way. 'Solartex' would probably be best for a more durable lightweight finish.

For power and weight requirement I would suggest that for a crossflow scavenged 0.25 engine, 64 oz should be aimed for, and with a 0.30 or Schneurle scavenged 0.25 this could be in the 70 oz region although with the higher weight a faster landing approach will be needed. A point to bear in mind is that scale biplanes have a lot of drag, so that high flying speeds will not be achieved, therefore, use a low pitch larger diameter propeller, 10 x 3-1/2 for 0.25 and 10 or 11 x 4 for the 0.30.

Flying: The following points should be checked carefully before attempting to fly.

Firstly, it should balance in a slightly nose down attitude when supported at the front balance point position, if not, repositioning of the gear, or ballast added in the engine bay, should the former not be possible, must be carried out. A rearward CG could make the aircraft very difficult to handle during test flying.

The stated control throws are the maximum that should be used to start with, of course if you have the luxury of rate controls on your transmitter, then set these up to give 2/3 of the maximum throw with rate switches in low position. Hopefully, it will not take you long to get to the flying stage.

Take offs should not present any problems, hold in up elevator at the start to keep some weight on the tail wheel and stop any swing. Once under way, ease off the up elevator and the tail will rise, now let the speed build up before pulling back slightly to unstick. The climb out rate will depend on the power used, but for your test flight make it shallow and check stalling speed at a safe height.

There are advantages to be gained from hand launching models of this size and weight. Firstly, the model can be given flying speed while it is still quite close, secondly it can have five to six feet altitude from the start enabling any obstacle to be cleared, which is very useful if your flying field is small and surrounded by fences and hedges like mine.

General straight and level circuit flying can be carried out using between half to three quarter power. However, open up to full power and wait a few seconds for her to accelerate to full speed, then most manoeuvres can be started from level flight.

Once you have the feel of the Acro-Sport why not string together an aerobatic sequence in the modern style, involving many vertical manoeuvres, ie vertical rolls, flicks, torque rolls and tailslides. "