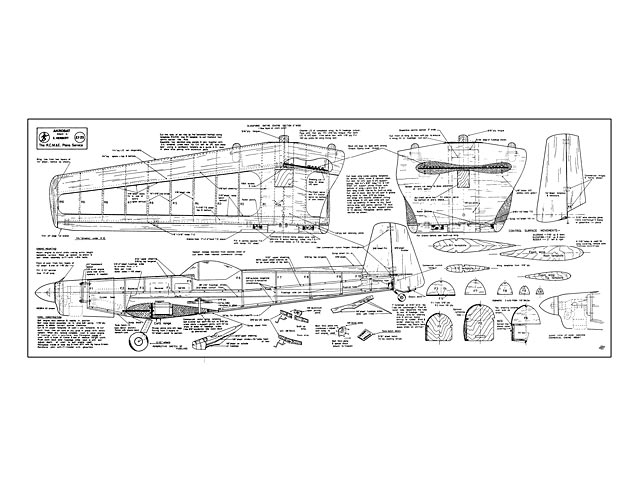 Quote: "My first Akrobat was designed and built in October 1969 when I thought that there was a possibility of the FAI following the AMAs lead by introducing a more difficult aerobatic schedule with flick rolls etc. However, predictable as always, we went the other way and simplified the schedule!

I completed the model though and found that the performance was even better than I had expected, so much so that I have built nine variants and think that it is now impossible to improve one aspect of performance without detracting from another.

The airframe structure has been widely modified throughout the series in an attempt to reduce construction time, reduce cost and improve the Zlin-like appearance; again I now think that I have reached the optimum with the construction shown on the drawing.

I do not claim that this model is especially good for FAI aerobatics; but it's a lot more fun to fly and will do manoeuvres that would have a Super Star falling out of the sky. It is ideal for fun fly events now so popular (35 spins from 30 secs. climb for instance!) at Lindholme 1971. 78 spins including starting engine and spot landing in 2 mins. at Fradley 1972. I was timed at less than a minute for a take-off, 3 loops, 3 rolls, cuban 8, 3 spins and landing, at Lindholme 1972.

A tailwheel U/C is used for several reasons, not the least being that a nose-wheel would look completely out of place, and is also far less practical for sport flying. I concede that a nosewheel may be superior for FAI events but see no point in the complication, vulnerability, added weight and drag and ruined rudder servos' which a nosewheel guarantees. Akrobat's take-off and landing characteristics were good enough to enable me to do six touch and go's in three minutes when winning the Lindholme Rally last year.

Construction: This is quite straightforward and several models have been built from the drawing, without instructions by people to whom I have given plans; all have remarked on the speed, ease of building and small amount of expensive materials used.

Fuselage: No plywood doublers are used but the inside of the tank component is covered with one layer of glass fibre tissue and the corner joints are reinforced, the plywood cross piece to which the wing is bolted is also fibreglassed in, and the 2nd former around the wing tongue hole is covered with glass cloth.

The sides are cut from 1/8 x 3 x 36 in medium balsa, note the joins under the tail. The 1/4 in corner pieces and uprights are then glued on, making sure that left and right hand sides are made. Pin the rear ends together and fit both front formers (5 minute epoxy), add formers and cross pieces allowing sides to curve naturally to tail. Fit top decking, front doublers side and bottom stringers wing securing plate and servo mounting plate. Make up tailwheel assembly and contact cement in place.

Fibreglass inside tank bay, both formers, wing plate and tailwheel bush using glass tissue for surfaces, and chopped mat for corner reinforcement. If fuselage is not to be covered with Solar-film, build and fit tailplane and fin. NOTE the top decking is brought approximately 3/16 in over the sides. The bottom is not sheeted. Sand down all stringers to shape, fill and sand smooth in usual way.

Wings: All versions built so far have used foam cores, veneered with various materials. Of these, Obechi seems to give the best value. For interest other materials used have been..." 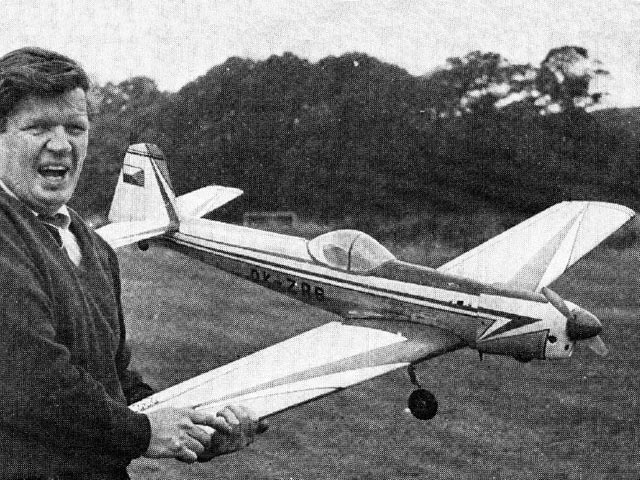