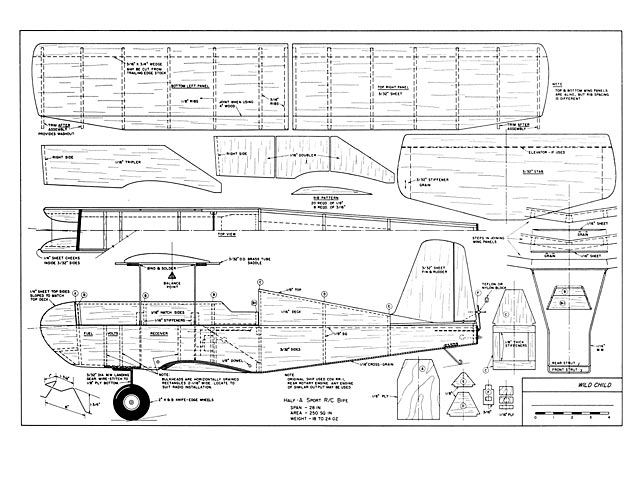 Quote: "Do you know why writers get gray? I'll tell you why writers get gray. Suppos'n you sit down and design a nice little Half-A biplane, you fly it over a period of about three to four-years, and it proves to be a durable, stable lively little plane. It's simple to build, will handle single channel with escapement or pulse, and most of all, for the hobbyist deeply involved in multi, it provides a needed change of pace from the 70 mph, 8-pound Fort Knoxes he's usually pushing around.

So what happens? Well, this writer who is about to get gray, scribbles out a story on this little biplane, which one of his friends has dubbed the 'Wild Child.' He tells all about the change of pace bit and how relaxing it is to fly single channel once in a while. He explains how, with the kick-up elevator properly applied, it is possible to make three-point landings (no, not wing tip, rudder tip, and stab tip - just two wheels and a skid!) He tells how, with deft applications of right rudder pulses on a Babcock Compound it is possible to fly around in mad cicles about five feet off the deck and send everybody running for their cars.

He goes on to explain how this maneuver prevented a flyaway one day when he used a plug-in antenna connection for ease of transferring the receiver from one plane to another. On this occasion, he luckily realized after the first couple of commands that he had forgotten to make the connection and WC was up there with about five inches of antenna. The last key had put the plane in a turn. Fortunately, Wild Child was never in a sweat to get out of a turn, once put in it, so this soon-to-be-gray writer ran after the plane, got within range, and proceeded to fly it in 20 ft circles, ukie fashion, until
the fuel gave out. Needless to say, the antenna has been one-piece since then!

I remember another time when this - oh, I forgot - I was going to explain why writers get gray. Well, this writer fella was sittin' around the house doin' nuttin', as usual, when the phone rings and some nut claiming he's editor of an R/C magazine says hell make the Wild Child go down in history if the writer will send him the whole business so it can be published. The writer said 'fine' and then had a heart attack. (To all you fellas who may be talking to an editor in the near future, don't worry, this wasn't the cause of it.) To make a long story short (It's too late now, Willie - Ed.), this writer-type guy put the job off for about three or four months and then finally got on the stick to finish it up and send it to the editor. Just as he was going to mail the article about the change-of-pace biplane for single channel, the greying writer gets a phone call. You guessed it! That nutty editor again. Y'know what he's going to do? He's going to create a sensation by putting six-channel in the Wild Child and come up with one of the smallest Half-A multi's to date!

This guy's mad! But, y'know, it sounds intriguing as the devil! The Wild Child isn't exactly a sub-miniature cuty-pie. With a 28 in span and about 250 sq in of usable wing area, it has hauled a 22-1/2 volt Kraft single, 3 pencells, a 22-1/2 volt hearing aid battery, and a Babcock compound on rudder and kick-up elevator for most of its useful life. Just to prove that wing loading is unimportant, at 23 ounces all up, the wing loading is only 13 oz/sq ft., but the plane feels like a brick compared to the modern-day so-called vest-pocket sized back-yard R/C flitabouts.

I'll take the `Wild Child's' ruggedness and penetration qualities any day in preference to the superlights. I must concede that with careful attention to weight factors, a Wild Child can be loaded with special multi equipment and still come out at 23 to 24 ounces. Whether you fly it on single, six, or pulse, you'll like the 'Child'..."

Note this design seems to be an enlarged version of the earlier Bill Northrop Lil Beau Bipe (oz1601) design. 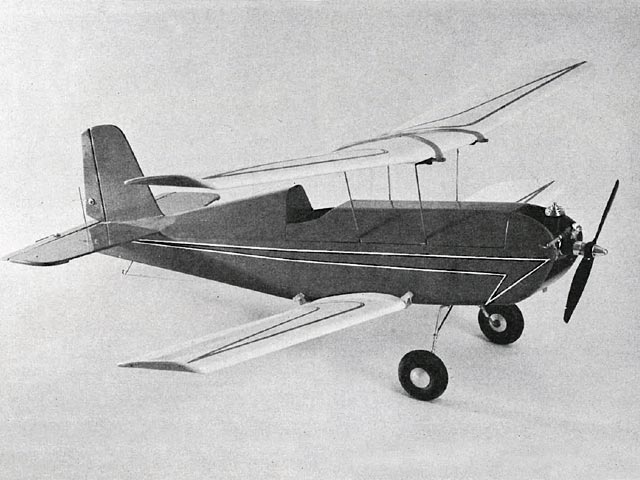