One of the hottest of the new crop of jet fighters currently being tested is the XP-84. With razor-thin wings superpowered by the hush-hush General Electric axial flow turbo-jet engine, the 'Thunderjet' is Republic's entry in the assault against supersonic speeds.

The little flip-ship version of the Thunderjet detailed here is one way you can have your jet and fly it too. Realistically marked and decorated, it delivers a performance worthy of a contest type glider and can be turned out in a half an hour from a few hunks of balsa.

Patterns for the wings, tail and fuselage are obtained from the plan with carbon paper. Cut the wing and fuselage from sheet balsa and the tail section from 1/16 sheet. With a piece of sandpaper wrapped around a small block, sand all the parts to section.

Cement the wing and tail halves together, propping up for dihedral. When thoroughly dry, slide into the slots in the fuselage and rudder and cement liberally at the juncture points. The 'bubble' cockpit canopy is cut from heavy celluloid and cemented in place.

Two coats of grayish-white dope will provide an authentic finish but if you are looking for that last tenth of a second duration, use glider polish. Structure and control markings are applied with a ruling pen and India ink and army star decals add a final touch.

Balance the ship with buckshot glued in a slot cut in the fuselage bottom near the nose - short test glides will indicate the required amount. During the first test flights go easy on the muscle and get the proper amount of turn worked in by breathing on the rudder and warping it into trim. Then wind up and heave.

If you find you are not another Bob Feller when it comes to pitching your Thunderjet, cement a hook for catapult launching half way between the wing and leading edge and nose." 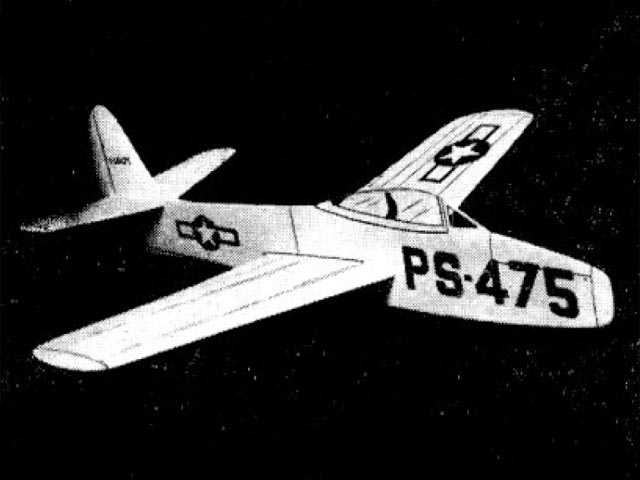