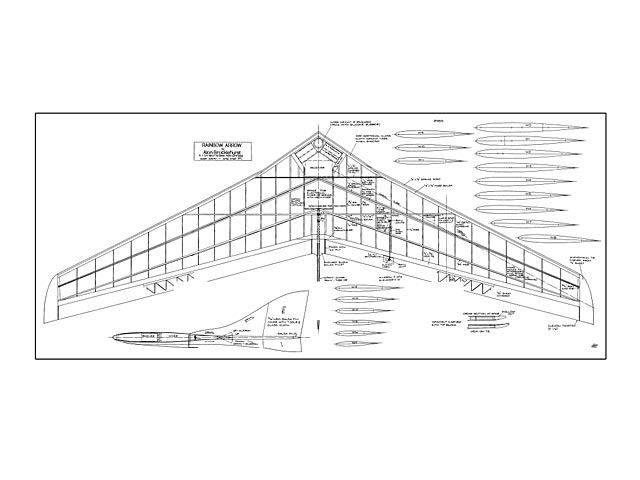 Quote: "Rainbow Arrow was designed for the annual Woodstock Trophy event held by the White Sheet Radio Flying Club. The competition requires the model to be flown between two flags at the top of the slope and perform a couple of rolls, followed by a spot landing. Not a very demanding contest you might think, but then tailless models are often of fairly limited performance and those that are easily capable of the rolls may find difficulty in flying behind and through the 'gate' in marginal conditions. A model with a large span would have a slower roll rate and may therefore require more height for the manoeuvres. The aim of Rainbow Arrow was to create a model with a good L/D ratio which would therefore have adequate performance and also one which would be agile.

A brief description of the Rainbow Arrow was given by Sean Walbank in his Silent Flight column (Feb '87). However, since Sean and some of the other White Sheet members won't let me forget that I had promised a full-size plan - here it is! The

Rainbow Arrow has proved to be a very successful, more than fulfilling my expectations. It has been flown fairly extensively over the last year or so, and with it I have learnt to perform all kinds of manoeuvres that I had not expected to be able to perform with a tailless model. These now include inverted spins and outside loops!

The Rainbow Arrow's good performance comes from its clean lines. Every effort has been made to keep the wing section clean, and to keep protuberances to a minimum. With no bluff fuselage and no tailplane surface drag to worry about, the model offers more performance than a conventional slope soarer of the same span and loading. The trim drag, which is usually the main concern for a tailless design, is kept to a minimum by use of a symmetrical aerofoil section and small static margin. The C.G. is set 8% forward of the aerodynamic centre of the wing and thus the model responds rather like a thoroughbred aerobatic model, and requries minimal elevon angle to trim. Rainbow Arrow is therefore not a beginner's model, though it should not present any difficulties to those who have spent some time flying slope soarers and are looking for something a little more exciting to try.

Detail Design: Rainbow Arrow has several features that are worthy of mentioning here. The elevons on the original were twisted ten degrees so that the washout would be introduced gradually towards the tips. In practice this has been found to be too great, so a twist of five degrees is now recommended. The elevons are driven through a separate servo using a Century Systems electronic mixer. Those who have this facility on their transmitter will be able to save some weight and some money! The use of a non-mechanical mixer means that the centre of the wing can be kept clean with no drag creating bulges or cut outs. The pushrods from the servo go direct to the elevons and are streamlined by a fairing made from masking tape..." 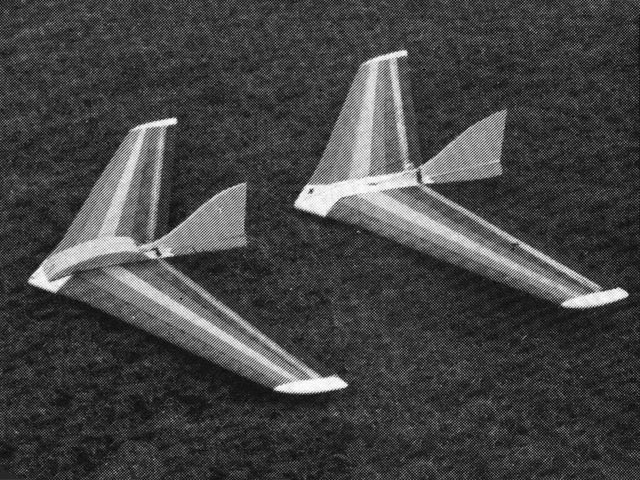