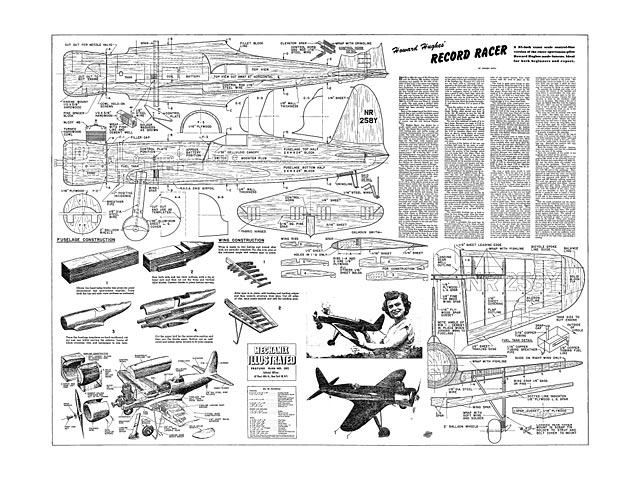 BACK in 1935, the year of the Flying Flea and the Boeing 299, another aviation milestone was passed. On the 13th of October of that year a tiny plane was flashing over a three kilometer course at Santa Ana, California, in an attempt to break the world's landplane speed record. Six times the ship roared over the course while the NAA timers below clicked their watches. The pilot was turning his ship back for a final dash when his gas tank went dry. He quickly switched to a reserve tank, but the 1000 hp P&W twin row Wasp Jr refused to catch. The pilot made a skillful belly landing in a beet field, but the landing gear, which had been partially lowered, was wiped out.

Back at the judges' stand the NAA timers agreed that a new world's landplane speed record of 351.79 miles per hour had been set. The pilot who had just established this record was Howard Hughes and the plane. of course, was the now famous Hughes Racer.

The Hughes Racer was chosen for a model which could look realistic and yet fly fast. The design has a long moment arm, wide landing gear and stubby wings; all excellent characteristics for a control-line model. The wide chord and short span of the wings producing a high Reynolds Number which, in turn, produces low drag and high lift. The high, wide landing gear makes for excellent ground handling characteristics and slow takeoff and landings due to the high angle of attack while in the three point position. The model is built to a scale of 1 inch = 1 foot and can handle almost any engine from a '29' to the big 60's. A Mc-Coy 49 Redhead Jr was used in the original MI model. Modelers will find. their Hughes Racer to be exceptionally fast with any engine, and those who use a racing sixty such as a McCoy Sr, Hornet, Hassed, etc, may reasonably expect speeds close to 90 mph.

The first step in the construction of the Hughes Racer is the enlargement of the plane. This unpleasant chore can be neatly sidestepped by investing fifty cents in a set of full-sized MI plans at any hobby shop. After the necessary materials are purchased, construction can be started.

The fuselage is carved from two hard 2 x 4 x 24 in balse planks joined as top and bottom halves rather than two side-by-side blocks. Spot cement the blocks together, trace the side and top outlines and then cut the fuselage shape. Cut out the wing and rudder fillet blocks and cement them in place before starting to carve the exterior. Carve the fuselage to shape, using the templates on the plan to get the required cross-section. The fillets are left oversized and rough until after the wings and tail are mounted.

After sanding the fuselage thoroughly (omitting the fillets), carefully split it apart. Cut two slots in the lower half of the fuselage to accommodate the engine mounts. Glue the mounts in place with Casco or Weldwood glue and hold them with small C-clamps until thoroughly dry. If you plan to use any other engine than the McCoy 49 it will be necessary to make changes in the size and location of the engine mounts. 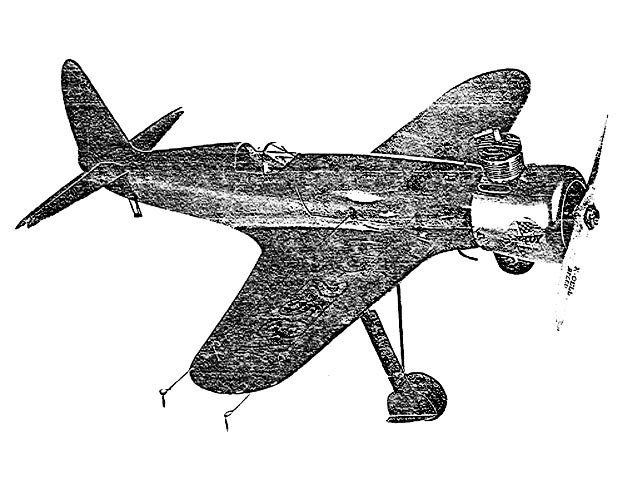