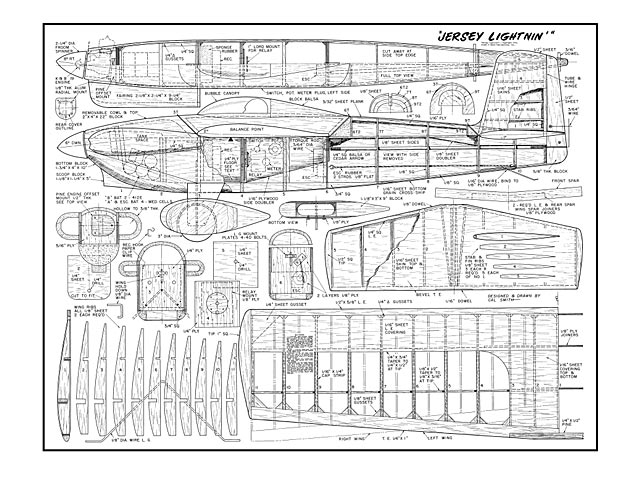 Quote: "Cal decided to have himself some fun with a radio-controlled model which closely follows the Goodyear-Continental racers. Scoots like scalded cat! Jersey Lightnin', by S Cal Smith.

You should hear the comments when this ship appears on the field: Where are the control lines? or, Pretty big team racer, ain't it? Then when the gang finds out it is an R/C job they just kinda shake their heads, mutter a bit and walk away. But they come back in a hurry when this baby gets airborne and roars off like a scalded cat.

Seriously though, after watching lots of R/C flying, putting in considerable time ourselves on blip-button-flying the typical high-wing R/C design we decided on a design that more closely approached our favorite full-size airplane - the Continental (Goodyear) Racer.

The design you see here is the result. Numerous flights have debugged it to the point where flying leaves little to be desired. The ship is fast, climbs steadily and has just enough lateral stability to hold altitude when blipped around a turn. Hold the full rudder on and it starts down after about 180 deg of turn and builds up speed quickly for looping and other stunts. Recovery is good and steady climb grabs back al-titude easily. Glide is fast, so fly this job with plenty of open space.

Bucking a 20-25 mph wind with a conventional R/C job is sort of like flying a helicopter in hovering flight, and since the wind is no respecter of R/C flyers, we put enough power in this bomb to take care of windy weather flying. Of course if it's going to fly fast, chances are you'll bend up the airplane more frequently, so construction is ex-tra rugged. Liberal doses of our favor-ite ingredients, plywood and Weldwood, were applied with good crash-proofing results.

Except for the shoulder wing and relatively high power, Jersey Lightnin' follows typical R/C configuration. Span is 52 inch, aspect ratio 5 to 1 with 530 sq in area, airfoil is 10% thickness. Tail moment is 45% of wing span, stab area 25%, fin area is 7%. Nose moment is nearly equal to mean chord. Dihedral is 4 deg and wing, tail incidence difference is 3 deg. Strong left turn and stall tendencies showed up immediately on test hops. Downthrust and right thrust were added on successive flights until smooth straight climb resulted. Thrust offset required became quite large, 6 deg down and 8 deg right with the K&B .19 engine swinging a 10 x 3-1/2 prop. Weight came to 4 lb 6 oz - pretty heavy, so wing loading is 14 oz / 100 sq in, or 20 oz/sq ft. A few test hops were made with an Arden .19 up front and ship flew well but a K&B .19 was later used for greater speed... "

Update 09/07/2014: Replaced this plan with a clearer copy, thanks to bulldogdrummond. 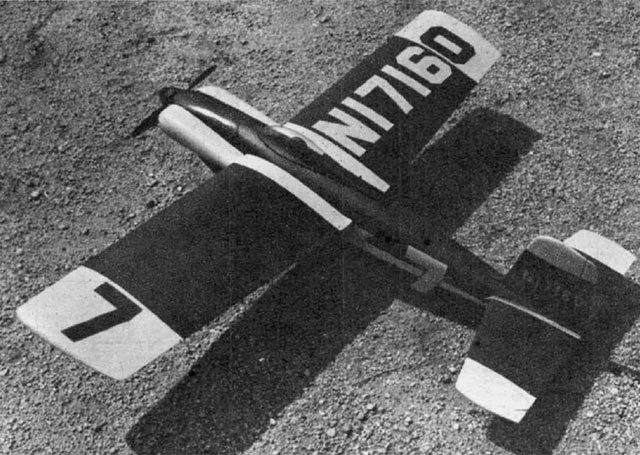