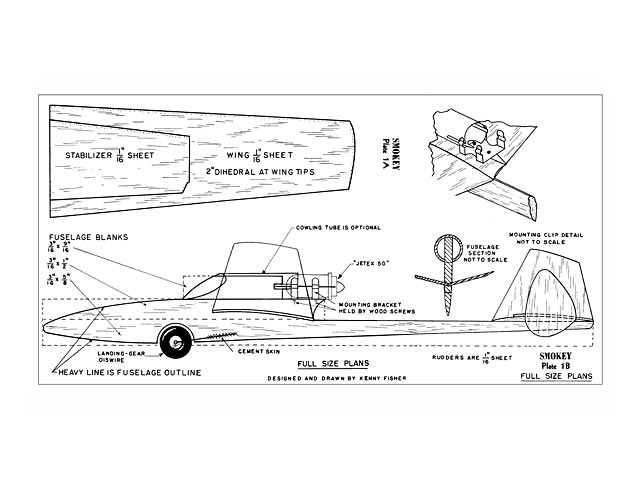 Quote: "Smokey, by Kenny Fisher. A glider with a hot-foot is the best way to describe this high-flying Jetex-powered all-balsa job. Full-size plans!

If you've ever had the urge to fly a rocket ship, then take a second look at Smokey. Just a souped-up hand-launched glider perhaps, but it's fast, simple and inexpensive to build (two bucks and two bits will cover the cost of everything, including the Jetex unit). Powered by the Jetex 50, the ship becomes a happy medium between a jet and a true rocket ship. What else can you ask for?

With no torque to worry about, and a multitude of different planforms to choose from, Jetex power provides the means of experimenting at a minimum of expense and effort. The manufacturer claims only a ounce of thrust, but once you fly it, you won't believe it - its 12-second burst of power will spiral 'Smokey' up till it is but a speck in the sky, In clear cold air, the ship will average better than two minutes.

Wherever possible, Flying Models brings you full-size plans, and this is no exception. As construction is simple, following regular hand-launch glider practice. even the rankest amateur should experience little trouble.

The wing, stabilizer and rudders are cut from 1/16 x 3 in medium-soft sheet balsa. These surfaces should be sanded smooth, and trimmed to an airfoil shape at the leading and trailing edges. On the undersurface of the wing, run three evenly spaced cement lines on each side. This cement, in the process of drying, will contract the wood, and produce the desired undercamber.

Next, trim the wing sections to a clean, correctly beveled angle, fill the pores of the end grain with a preliminary coat of cement, then recement permanently, blocking it to the correct dihedral angle.

The fuselage profile is shown in heavy lines on the plan. It can be cut from one sheet, or built up from blanks as shown. The latter method is stronger, .involves less cutting, and makes the problem of aligning a good deal easier for you.

First, cement the blanks together, trim to shape, then sand to a streamline section. The slot for the wing may be cut with a coping saw or a knife with a good point.

When cementing the stabilizer to the tail boom, the curve in the mount itself will take care of the undercamber. At this point the rudders are added, and the engine mounting clip is then screwed in place.

The cowl tube is optional, but it greatly improves the appearance of the model. It is formed by rolling a piece of soft 1/16 x 1-7/8 x 4 inch sheet around a 1/2 in dowel. Soak the sheet, and wrap tightly around the dowel, holding in place until dry. Then, remove the tube from the dowel, slide the open seam over the top of the fuselage, and cement it in place.

The rear should be even with the front fingers of the Jetex mounting clip. Trim the front of the tube to follow the fuselage outline so that it makes no direct contact with the engine casing, when the unit is slipped into its clip. Be sure to slit the tube as necessary to receive the mounting spring.of the unit.

The only major operation remaining is to cement the wing in its slot. Several coats of cement should be applied at intervals to form a strong joint. No landing gear was used on the original model, but it has been drawn into the plans to replace some of the modelling clay used for nose ballast. The model need not be doped, provided it is sanded smooth enough, but one or two coats of sanding-sealer will improve its looks and durability. The control surface lines can he ruled on with a pen.

Smokey can be flown two ways. To begin with, balance the model to glide by using modelling clay. Next, cut the Jetex fuel pellets in two for more economical power testing. Power flights can be straight jet-propelled, or combined with a hand-launch.

For straight power flight, launch the model as soon as the Jetex begins hissing loudly. For combined flying, heave it into the air as soon as the wick is ignited. By the time the craft is gliding normally, the engine will take over, and start the climb from whatever altitude you can throw to. Either way it's a lot of fun, so you take over from here. Better have your running legs handy when you let go of the ship!" 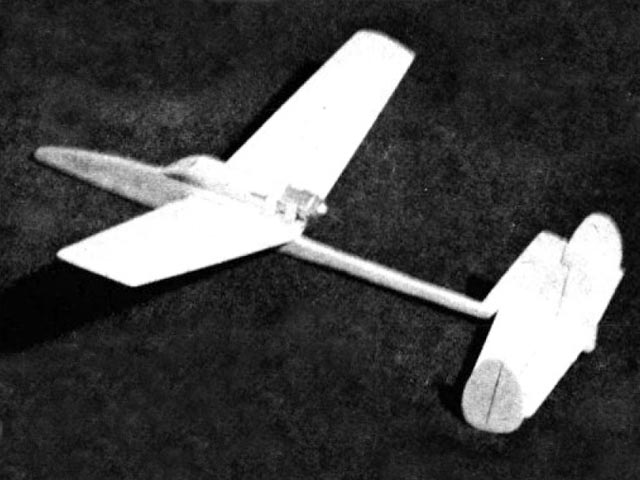 I can vouch for Smokey’s performance, having built one about 10 years ago. Just finished I took it to Old Warden to try out. Not having a Jetex, I fitted a tube for a Rapier L2 rocket and Mike Stuart gave me one of his L2’s. Lighting the fuse we launched and away she went about 30 feet up DEAD straight…over the airfield, the boundary hedge, road and the next field and…gone forever! If you make one be sure it is trimmed to turn! Sorry I never took a photo of it.
Peter Rea - 11/01/2022
Add a comment