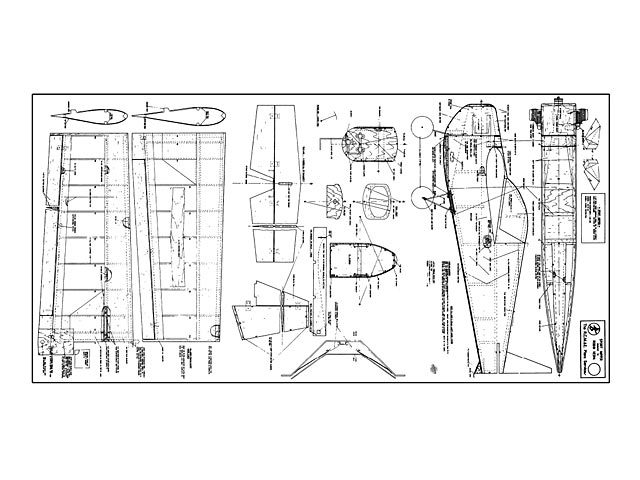 That's rather nice, what is it? A great compliment but the 'what is it?' bit took me by surprise. Can the Tipsy 'Nipper' be that little known? Shortly afterwards another friend enquired Flown the Nipper yet?" When asked who told him it was a 'Nipper,' he replied, I recognised it, looking dis-tinctly hurt and insulted. I'm sorry that I doubted his ability to recognise aircraft but I was, at that point, somewhat concerned at the thought of having modelled a prototype that few would know. But on reflection the shoulder wing layout, bubble canopy, trike U/C and tubby fuselage make the Nipper quite unmistakable to those who have seen one before, and hopefully, pleasing and interesting to those who have not.

Taking liberties: I've found, to my cost, that it is all too easy to commit aesthetic murder by taking too many liberties with a scale outline in an attempt to create a practical sports model. However the Nipper proved quite resilient to the ravages of pencil and rubber and
managed to retain its uniquely distinctive shape.

Deviations from scale in the 'Sports Nipper' are many, some being blatantly obvious, others less so. The wing saw most change. Firstly, strip ailerons replace inset type and secondly, a well rounded semi-symmetrical section of approximately 20 per cent thickness was incorporated for a good range of airspeed and modest stall charateristics. The fuselage saw a 2in. increase in moment arm and a rudder/fin arrangement replaces the original all flying type. The engine cheek cowls were omitted for convenience but may be reinstated for greater authenticity. The 48 in span Sport Nipper is strictly semiscale but when given a comparative size just tips the ratio scales at 1/5 full size thus demon-strating the diminutive 19 ft 8 in (six metre) span of the real machine.

To change tack completely, I must admit that building a model Nipper has been an objective of mine since slaughtering my first piece of balsa some - years ago. Strangely enough, it was only last year at Headcorn Aerodrome near my home in Kent that I saw my first real life flying example. Now it was this sighting that moved me to get off my 'arris and turn a dream into reality.

On your marks: Before eclipsing yourself in a cloud of dust and shavings I would wish to say, at the risk of boring everybody to death, please do make every attempt to build light. A tip that will enable you to achieve lighter models is simply choose your wood by weight as well as grain, etc. I chose the wood for the Nipper twice, once manually estimating weight and once using scales. The net result was the scale weighed pack was around 75 per cent the weight of the manually chosen pack, the effect on a 2 lb airframe needs no explanation!

Go! Cut the fuselage sides from butt joined 1/8th balsa sheet and add all longerons, struts, blocks 'c' and fuselage doublers. Make F1, F2, F3 and the undercarriage plate. Secure the wing bolt nut to the hardwood rail then epoxy the rail to F3. Join the fuselage sides with Fl, F3 and the undercarriage plate using epoxy, holding the assembly square while the adhesive cures. Fit F2 and the interposing block, the lower fuselage blocks and forward lower sheeting to F3. When dry, draw in the fuselage rear and glue, if snakes are to be used they should be fitted at this point in the proceedings. Cut the fuselage spine from 1/4in. sheet and add the yin. square strips, then fit the completed spine onto the fuse-lage assembly.

Chamfer the spine sides as required then draw in the upper fuselage sides and glue to the spine. Make the engine cowl and temporarily tack it to F1. Now shave and sand the completed fuselage assembly to shape, when done, separate the cowl from the fuselage. Note: Make the canopy and the fairing after the wing has been completed.

The wing: First off make the tip and root rib templates from aluminium or Formica. Cut eight rib blanks, sandwich them between the two templates and make ribs R3 to R10. When the rib pack is split up simply remove, by sanding, all chamfered edges which will leave the ribs perfectly formed. Easy, what? Now cut R1 and R2 using the root template. This does however make R2 slightly over-size but it may be trimmed when installed in the structure. Repeat this process for the other rib set. I was so carried away with checking the weight of each sheet of balsa that I ended up with a mix of 1/8 in and 3 mm wood. I suffered further misfortune by making one set of ribs from 1/8 in and the other from 3 mm material which manifested itself in the form of one wing panel being 1/8 shorter than the other..." 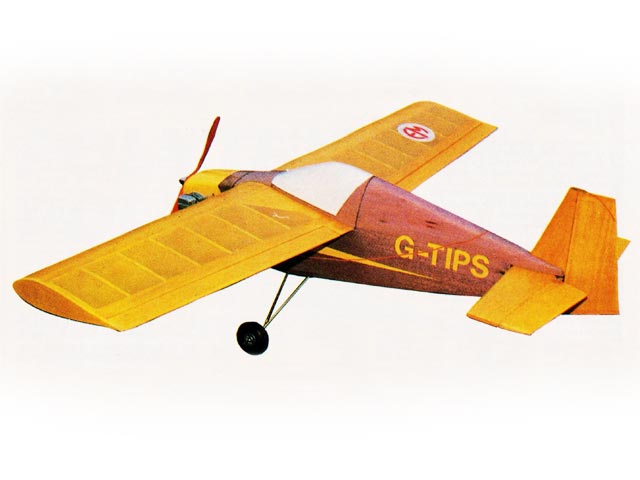