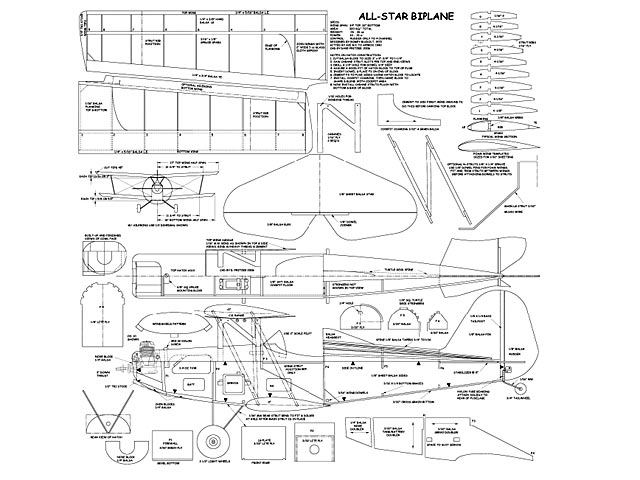 Allstar (or All Star) Biplane. Radio control biplane model, first published as the RCM All Star (oz7916) then later kitted by Ace R/C, for .10-.15 motors. Later versions had constant chord wing. This is a modern redrawn plan in PDFvector format, tiled. And clearly it comes from here - http://my.pclink.com/~dfritzke/ - originally. 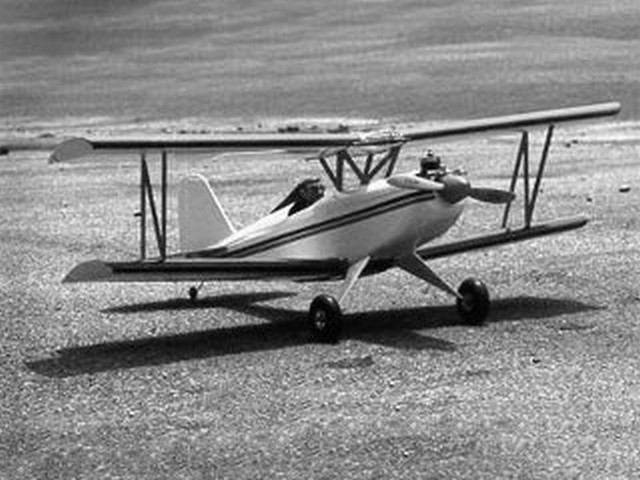 Hi, Steve. I just compared this plan with the All Star plan from 1972, when I noticed that the original showed the Ace foam wings joined so that they had a double taper. The built-up version shown here has a straight leading edge, which will require the center of gravity to move forward slightly. My first All Star was built in 1974, with a non-throttled Fox .15 up front. At 28 oz, it was a very lively flyer, but once the engine quit it had the glide ratio of a brick. The glide was soft and slow, but you'd best be very close to your intended landing site. Two more All Stars came along in later years, and they flew just as well, but I think it would be a real can of worms if the CG is too far back. My suggestion? Use the forward CG shown on the plan for the first flights. Thanks again for the great site.
Moeregaard - 02/05/2014
Steve, here is a scanned photo of my All Star, built in 1987 [see more pics 003]. This airplane is an identical copy of the All Star I had in 1974, and it even used the same Fox .15 I had in the first one. Any engine in the .09-.15 range will fly the airplane nicely, but it really needs to kept under 32 oz to fly well. I should mention that I used 3/32" balsa for the fuselage sides and tail surfaces, per the original RCM plans. The Ace foam wings are no longer available, but Dave Fritzke's excellent CAD rendition showing built-up wings should produce a lighter and more robust airframe. Keep up the good work! Regards,
Moeregaard - 25/05/2015
Here is my second Ace All Star biplane, OS .15 and 3 channels [more pics 004]. A great little bipe.
dfritzke - 24/10/2016
The cabines should be cut from 1/8" ply as the 1/16" is too flexible. I have built two of these in my early days of modelling, first with the constant chord foam wings. The second one was bashed into a Goshawk. The wing struts were a PITA.
PeterCary - 24/11/2016
Add a comment