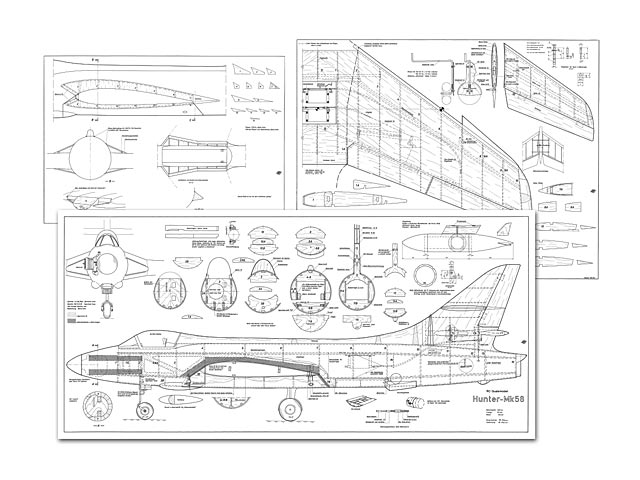 Quote: "Model of the Month, by Franz Meir-Patton.

WITH the completion of this Hawker Hunter 58 a wish I have had for many years has come true. I have waited a long time to build this plane as a scale model, but I only dared start on the project after I had built two other 'jet' models which gave me the necessary experience in construction and flying.

The main difficulty lay in the designing of the wing centre section. The Hunter, being a mid-wing plane, has the wings placed so deep in the fuselage, that I was not able to use a conventional method of wing attachment. Besides, this method would have been too risky, as in the event of a hard landing, the wings would have been damaged at the air-intakes. The wings are therefore attached to the fuselage by means of nylon screws. The air-intakes are accordingly divided into two parts, the upper part being attached to the fuselage, the lower being part of the wing.

The model is built similarly to my previous scale model F-8E Crusader (oz1276) based as usual on a plastic model kit as well as on original data sheets from the Swiss Air Force who used the full size machine.

I paid great attention to the controls. Except for the rudder all control linkages, such as throttle run, are done with wire. These wires move in teflon tubes, which are themselves inserted in aluminium tubes. It is thus possible to obtain a minimum play in flaps and controls which is especially important with proportional equipment.

In order to reduce the trimming weight at the tail, I placed the servo mechanisms and the battery 6 in behind the wings, both being easily reached through a flap on the underside of the fuselage.

Never has a first flight of one of my models been so meticulously prepared as that of my Hunter. Every detail has been examined with great care. The control mechanism, which had up to then logged about 150 flights, was completely overhauled and the contacts of the servo units have been gold-plated.

In the Merco 61 Mk II engine with two Glow plugs, all contours from intake to exhaust have been polished, to produce an extra 1,000 revs. These modifications also improve the idling.

The scale model was flown off a concrete runway of about 550 yards length at a sports airfield. As usual when flight testing a scale model a certain nervousness was apparent in all people present, each one of them probably being concerned with the same questions. Is the centre of gravity in the right place? Is the trim correct? Will the engine keep up or the steering fail?

The Hunter flies wonderfully. At first it was a little tail heavy, but it could be easily controlled. This imbalance has been corrected by shifting the centre of gravity forward by 2 in, and has resulted in a very easy flying model indeed.

The speed is very high but landings and take-offs are not critical, thanks to the flaps. The Hunter is in fact easier to fly than some 'standard' multi models such as Taurus, Kwik-Fli or Stormer, but its aerobatic capability is limited to loops, turns and rolls.

With the Hunter I have completed a development series of swept-wing models. I have built these in order to determine and test the behaviour of backswept wings in scale models and I may say that this work has been very encouraging." 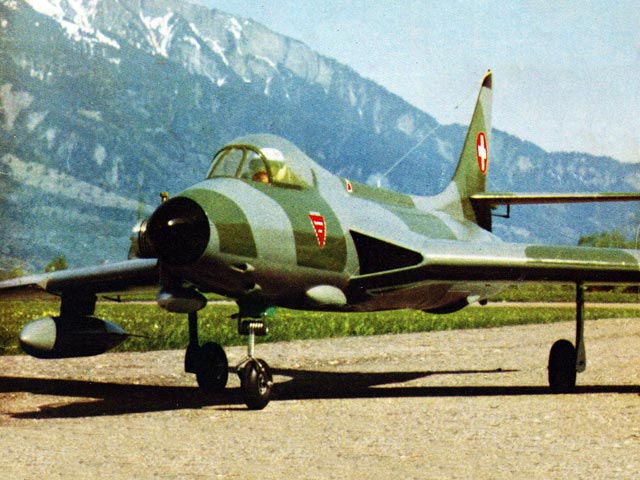