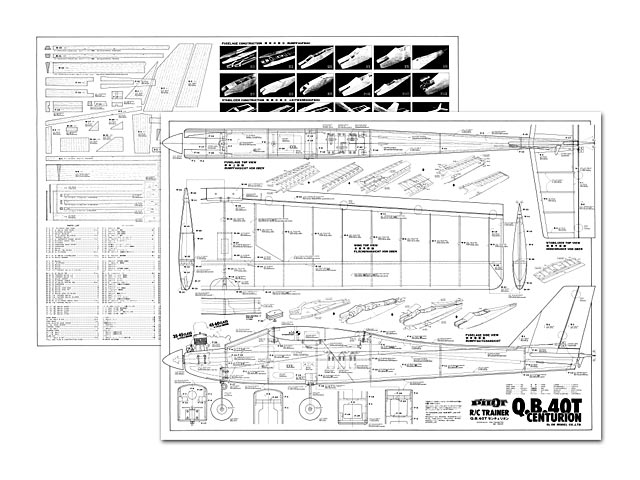 Quote: "Please check all parts in this kit each by each with the parts list before start building. All die cut plywood and balsa wood parts are numbered and rest of parts are listed by actual size on the top left.

The numbers which used on the list such as an 'F' or a 'W' indicate the places where these parts go. F means fuselage. R means virtical fin. S means horizontal stabilizer. W means wing.

There are several glue you will need to construct this kit such as epoxy, cyanoacrylate and aliphatic resin glue. Use them wisely in each area. We recommend you to use epoxy around motor mount, wing center section, and landing gear mount.

[Phote 3] Glue F-6 and F-7 to one part. Trial fit all balkheads to the places. Glue firewall between two fuse sides. Install all bulkheads in same manner, using rubber bands to hold parts. Glue F-13, tapered balsa wood tail block, checking alignment. Glue the hard wood motor mount F-14 and F-15 in to the places. NOTE: There is a right side thrust on the motor mount. (F-14 on right F-15 on left)

[Photo 7 & 8] Install nylon nosegear base on firewall using 3 x 15mm screws and nuts. Glue F-17 3mm ply plank to nose bottom. Then glue F-18 and F-19 maingear mount to the place using epoxy. Be sure to glue F-19 properly. Plank fuse bottom with 3mm balsa sheet as a same maner. [Photo 9] Trial fit a nose gear and main gear to the places. [Photo 10 & 11] Glue F-20 balsa wood doubler on the motor mount. Glue F-21 balsa block to the place. Then sand all over the fuselage to finish.

[Photo 12] While sanding the fuselage, check it for any misglueing and alignment. If there is some thing wrong, fix them. Now installing the engine. Position engine on motor mount so there is approximately 3mm between fuse front and spinner back. Mark all of the holes and drill 3mm holes. Install engine using 3 x 25mm screws and nuts.

Tail Assembly: [Photo 13 & 14] Glue S-1 and S-2 together in place. Glue stab. leading edge S-5 together on the plan at correct angle. Then glue S-4s and S-3 between leading edge and S-1. Cut all trusses to size over plan from 3x1Omm strip balsa. Trim to fit well-don't force into place. Glue in place. Glue R-1 and R-2 and rounding leading edge and tips with sand paper. [Photo 15] Attach elevator and rudder to the horizontal stab. and fin with hinges (not included in the kit) NOTE: The hinges are not permanently installed until after model is covered.

[Phote 16] Temporarily install hold-down dowels in fuse. Rubber band wing in place on fuse, making sure it is centered. viewing model from rear, see if stab sets level with respect to wing. Sand stab. platform area as may be necessary to provide a good level fit for stab. Do not alter the diccut angle of fuse sides. Center stab on fuse, measuring to obtain equal distance from side to side, and nose of the fuse to rear corner of each stab tip. NOTE: GLUE stab after model is covered. [Photo 17 & 18] Trial fit fin in place of fuse. When satisfied, glue it as same manner as stab....." 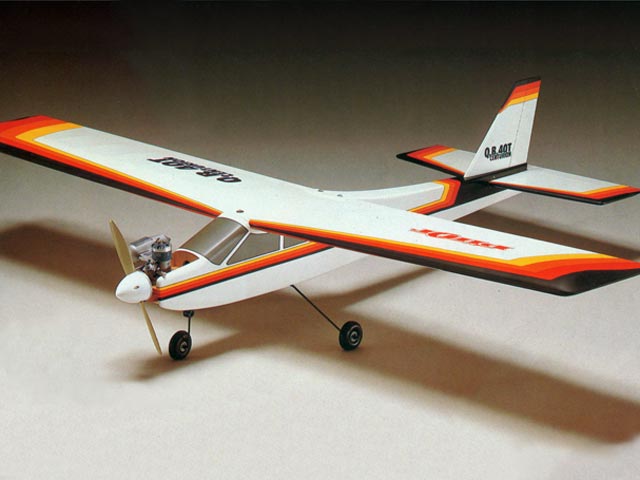