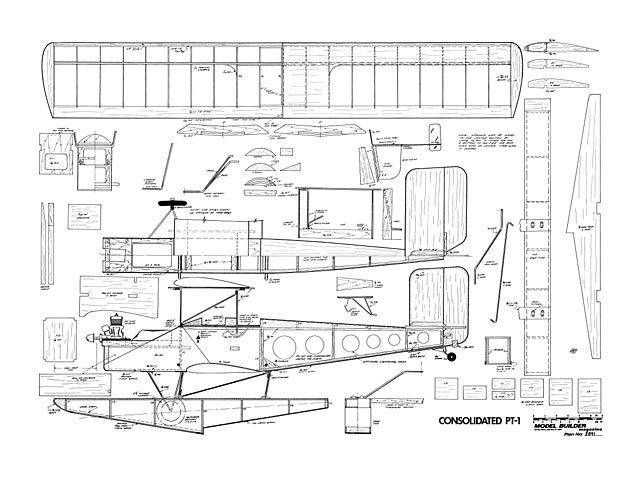 Quote: "Consolidated PT-1 Float Plane, by George Wilson. Here's a sorta-scale PT-1 for the guy who likes to fly over the wet stuff on a regular basis. It isn't a diffi-cult biplane to build, and its water manners couldn't be nicer. If wet doesn't drive you wild, skip the floats and build the PT-1 with the landing gear shown on the plans.

The Consolidated PT-1 was selected because of this author's affinity to relatively square aircraft that have their motors completely exposed. It is not even 'eyeball' scale - my source documentation is a single sketch by Douglas Rolfe in the book Airplanes of the World. He points out in the caption that the engine was fully exposed to facilitate easy main-tenance - a sterling approach to aircraft design!

The general configuration was in-spired by Bob Lovejoy's Rumplestadi published many years ago in RCM.

About 10 years ago Fred (Fritz) Hess brought a Rurnplestadi to the Brimfield meet. It had a single main float and wing tip floats for balance. With a .15 motor, it would not get off the water. However, as Fritz puts it: With a .19 motor in it, it went like a scalded cat!

The original model differs from the final plans in several relatively unimpor-tant ways. In fact, the plans were re-drawn to simplify some of the construc-tion and add some (probably unneeded) strength to the rear end of the fuselage. The wing structure was also simplified and made lighter. The original uses the built-up wings shown in the plans the foam wings used on the Rumplestadt (see the plan) should also work well.

Fuselage Construction: The fuselage is not difficult, but the following order of assembly will be helpful. Make a left and a right side as follows..." 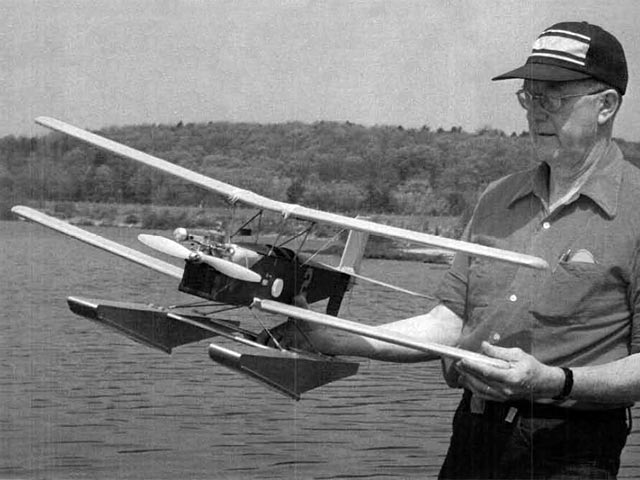