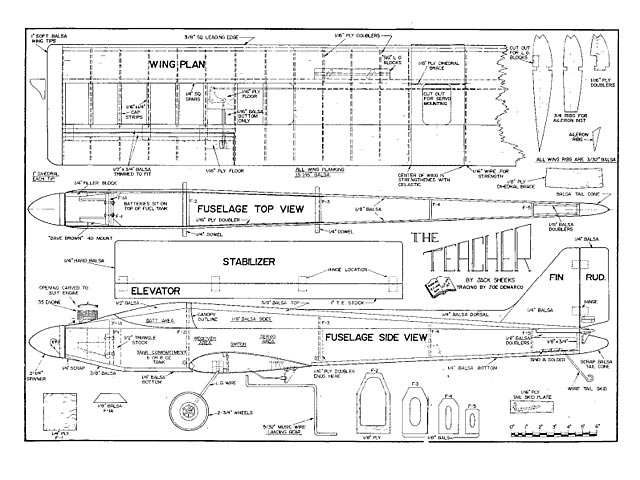 Quote: "As Boris Karloff would say, 'while sitting in my laboratory' (Hobby Shop) and discussing the facts of life about model aircraft more especially R/C low wing trainers, some of the local model scientists lamented the lack of variety in low wing trainers. This didn't register with me at the time. Little slow, I am. But when the shop purchased a load of scrap ribs from a model manufacturer, it dawned on me that they would make an excellent low wing trainer wing. They were originally used on a high wing craft.

So, with a batch of these and a couple of square pieces of balsa, I began gluing a wing together. I had no plan drawn, just an idea, besides if you mess up you can always say that's the way you planned it. As this masterpiece progressed many of these same locals asked what the name was and what it was all about. I kept telling them it was an airplane, but this seemed to disjoint them, so I figured I had better name this bird before they disjointed my nose. While pondering this dilemma, my lady walked in and the flash came and the name appeared. I'm not sure if it was idea or the fact that she effects me that way, but she is a teacher and that's what I named the ship: Teacher. Smart, huh? I got that way from dating a teacher. I was going to lay some ten dollar words on you but she hasn't taught me how to spell them yet.

Anyway, with the construction complete I decided to teach with the ship if it did what I thought it would and should do. It was all up to mother nature as to when I would get to test her. In Indiana these favored days can come as a complete surprise or after a long wait. They usually come when you have to work. Sound familiar?

The weather man predicted a good day, so I packed up all my goodies and headed out. We must have taken a wrong turn somewhere, because when I arrived at the field the winds were very mad. But, I had come this far and was not about to be detoured. Besides, like the man said, if it is going to fly it will fly in the wind. I'm not sure if he was a knowledgeable person or some nut who likes to see fat guys crash and burn.

I was there to show off, so I couldn't back out. Using the van for protection and it's battery for the starter, Jerry Caldwell and I started the new Tiger 35 and watched in awe as that engine ran beautifully the first time out of the box. We carried the ship to the highest hump in the field, as it had rained and was a little gooey even for walking. When we arrived in an area where the wind was parting our hair in the middle, we cut her loose.

After a short run the ship rose and hovered like a helicopter. The sight of this intrigued me even though the others wanted me to land. I decided that full throttle and up was in order and we were off like a shot, down wind. She came back okay, so we decided to see what she was made of and began putting her through various maneuvers.

It flew great. After a safe landing and a few minutes for bull and the regaining of my composure, the wind died some so we put her up again. This time Jerry took the box for a while and he agreed that the ship was a good one..." 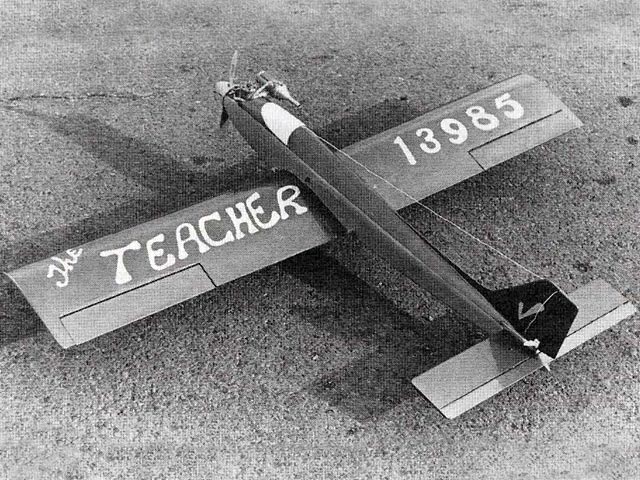