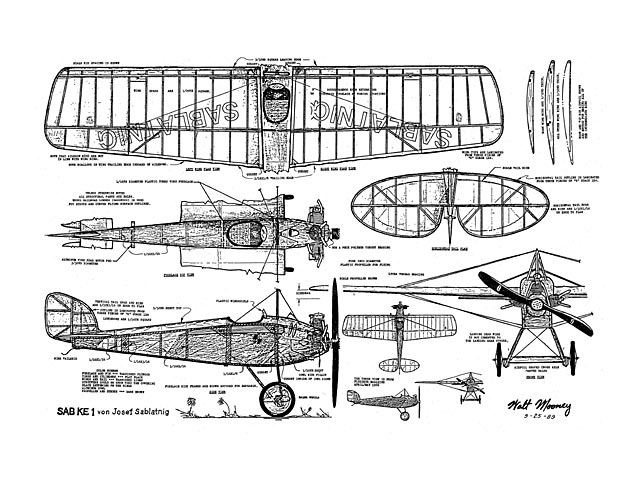 Quote: "This month's featured Peanut is also offered as a double-size (26-inch span) rubber scale plan. No matter what size you build, it's a real cutie and a fine flyer to boot! Sablatnig KE-1, by Walt Mooney.

The three-view for this airplane was found in the April/May, 1988 issue of the German Aviation magazine, Flugzeug. It had excellent lines for a Peanut scale, and was done in color. The wings and tail of the full-sized KE 1 were fabric-covered and finished in a translucent manner (probably clear dope), so that the structure showed through the covering. The fuselage and fin had plywood skins, finished with clear varnish. Wheel covers and engine cowl area were aluminum color. All this is shown on the Flugzeug three-view.

It was decided that the three-view would be enlarged at the local blueprint outfit on their Xerox 2080 machine and the model would be built directly from the enlarged three-view.

It turned out to be not quite that simple. First, the horizontal tail looked like an enlargement was a reasonable model variation. Second, the three-view arrangement was not arranged in a good format for a Peanut plan. Third, in common with almost every three-view I (or even the illustrious Bill Hannan) have found, the three different views did not match exactly in some important dimensions.

So the original three-view was copied in four different sizes, three to make the three different views match and one for an enlarged horizontal tail. These were then cut up and pasted into the plan format you see. Once this was done, a Peanut and a Twice Peanut enlargement on the 2080 was easy. This last as an answer to some letters asking for larger models once in a while.

The model in the photos was built Peanut-sized, and made to be easily disassembled (and vice versa), for shipping to Japan for the 'Nagoya Nuts' Proxy Peanut contes. The wings and tail surfaces were built with all the structure and covered with clear doped white tissue.

The fuselage and fin follow conventional Peanut structure, were covered with condenser paper, clear doped, and then had the plywood grain drawn on then with a fine brown felt pen, followed by a total coating of yellow felt pen coloring. Details were drawn on the model with a fine black felt pen. The reason for the skewed 'SABLATNIG' name on the wings was not apparent until the model was ready to put in the box.

Tail surface outlines and the wing tips were laminated. On the model shown, they are three layers of S-guage basswood 1x4 model railroad scale lumber. Kapler Mill Lumber Co. makes the scale lumber and it's available in most good model railroad stores. It is really lovely stuff to work.

Pins were pushed through the plan around the inside of the outlines. Pin spacing is about a quarter of an inch, except where the bends are sharp where the spacing needs to be tighter. Then the three layers are carefully wrapped around the pins, secured by several pins at the ends and other points as required, and the curves are fixed by bonding the layers together with thin cyano (Zap, Hot Stuff, Sig, or whatever). I put a drop of cyano on the wax paper that covers the plan and used a sharpened piece of 1/16-square to transfer minute amounts of cyano to the outline.

This outline making method works great and is almost quicker to do than to write about.

Construction of this model follows conventional small rubber model practice in almost all respects. There are a few more pieces than is usually the case but they are no different. The wing ribs change so little from one to the next that only the root rib, tip rib, and the method for making the intermediate ribs are shown. (I made all the ribs one evening in a motel when I was on a trip, and then, when I started assembling the wing I couldn't tell some of them apart.) It is probably best to cut all the ribs necessary to the size of the root ribs and then fit, shape, and notch them one by one on wing assembly. Small blocks of balsa are fitted into the wing structure at each of the points of bracing attachment. Lycra thread is used for bracing because it stretches, allowing disassembly of the wings from the fuselage without having to disconnect the bracing.

All the rest of the structure is conventional. Commercial plastic parts were used for the dummy cylinders, thrust bearing, and propeller. Dress snaps were used to simulate the cylinder heads and thin plastic tubing was used for the exhaust and intake piping.

Obviously, the model may be simplified without hurting in the scale judging and with some potential for longer flight times. Structurally, it does not need more than about half the wing ribs and tail ribs. It doesn't have to be capable of disassembly.

Flight trim required about an eighth of an inch of washout on both wings and a little nose ballast to bring the center of gravity forward to the position indicated on the side view. A single loop of 1/16 rubber will work for the motor." 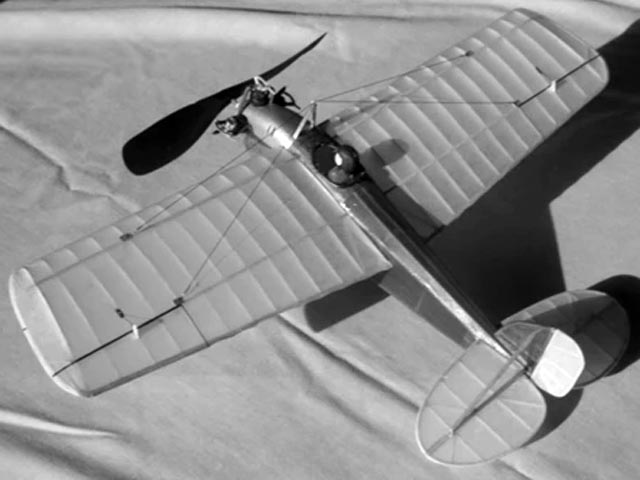 Some photographs of the fullsize original: https://www.histaviation.com/Sablat...
Robert Schlickewitz - 29/12/2021
Add a comment