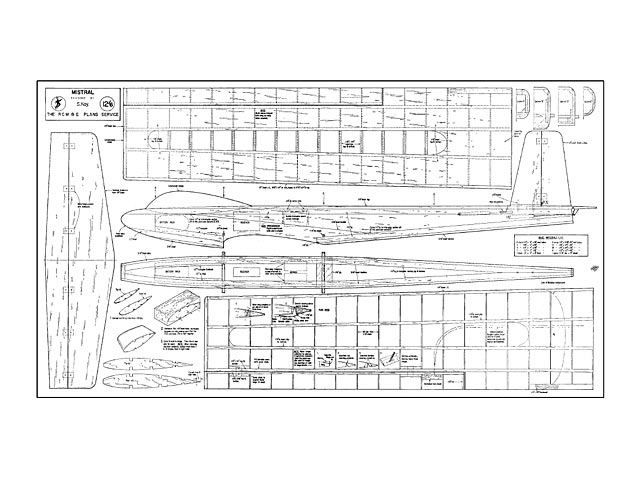 My first FIRST low wing slope soarer was a power model with the prop and undercarriage removed. Ignoring the advice of my fellow soarers I launched my rather unconventional model.

My improvised machine proved to be faster than most of the conventional soarers in use and was capable of performing most manoeuvres at great speed. I was so impressed with the model's performance that I decided to build a purpose designed low wing soarer. I wanted a soarer that was capable of flying equally well in both light and strong breezes.

After two or three experimental models which all performed well, the design finally crystalised into MISTRAL. This model incorporated all the good features of the earlier machines but its simple shape was made to look sleek and fast.

Construction. Fuselage: Mark out the 3/16 sheet to the outline shape on plan. Instead of using plywood for the doublers, I used 3/16 sheet as this helps to keep the model light. Add the sheet doublers to the sides. Fit to the top and bottom of the sheet sides the triangle pieces.

The sides are now ready to be pinned together at the tail. Shape the in. sheet and the nose block to the correct shape before fitting. Before gluing, pull the two sides to the nose block, hold together with rubber bands, and slide z in. sheet top and bottom into place. When you are satisfied that they are a good fit, take apart and glue together.

Fin and Tail plane: These were made of 1/4 in sheet soft balsa as per plan - not too soft though, you don't want to induce tail flutter.

Wings: Although the wing construction is shown on the plan as conventional structure, I used polystyrene wing cores and covered them in 1/16 sheet light balsa.

One of my aims when designing and building this model was to keep the weight down to a minimum and so when the model was complete I had to choose a suitable covering material. After considering the alternatives I finally decided on Solarfilm which is a very light material.

On completion, with radio equipment fitted, my model weighed only 31 lbs. Not only had I a light model. but one that was fast and manoeuvrable. However, I would recommend that when flying your low wing soarer you take along an experienced flyer. as beginners may find it a little hair-raising at first.

Really though, as with all models the trick is simply to get used to it as they say, the first flight is the important one. Once you are over that hurdle, it's merely a question of feeling out the model and building up the confidence to try all the manoeuvres which Mistral is capable of performing.

When you get to that stage you'll be really enjoying yourself. Low passes along the slope are a breeze with this model, but be sure that there are no people about to get in the way when you try that manoeuvre.

So there it is enjoy yourselves with Mistral." 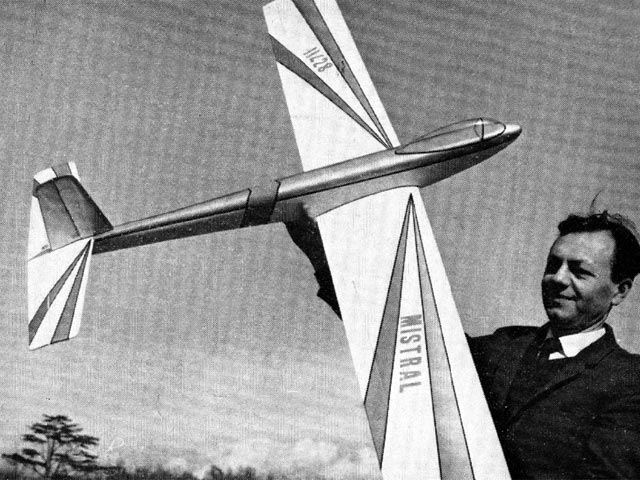