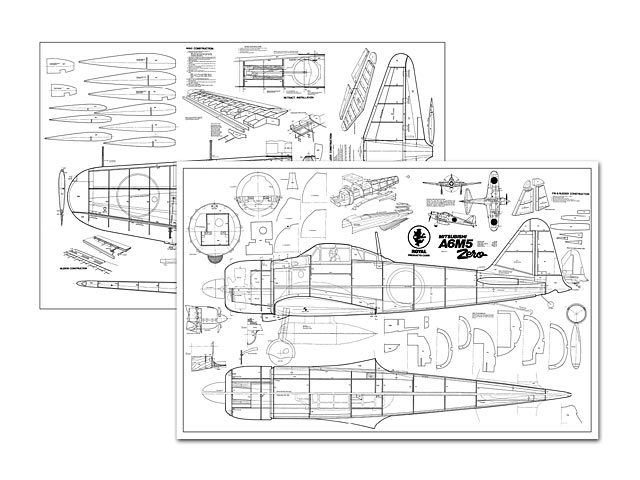 The Japanese Zero - one of the most famous fighter planes ever known - was built by the thousands and became very much respected by those who flew against it. A casual glance at the outlines of this beautiful craft reveals its potential as a fine pattern or Sunday flyer in addition to being a fine scale job.

There have been reams of print devoted to this amazing airplane, so you will have no trouble whatsoever in locating scale data. Just a word of caution - this plane, like all popular ones has many, many versions, so do be sure you don't cross features of one model series with those of another.

For this kit, we have chosen to detail the A6M5 (the series numbers varied from A6M1 to A6M8). If you intend this to be a serious scale effort you may obtain a beautifully detailed set of blueline drawings of the A6M5 from: SUPERSCALE Dept P, PO Box 201 Arlington, Texas. The following information is taken from these drawings:

The original 'Zero', known also by the code name 'Zeke', was a product of a design team headed by Jiro Horikoshi of Mitsubishi Aircraft Company. One of its more famous pilots was Saburo Sakai and the Super scale subject was assigned to the Yokosuka Navy Air Force. Standard coloring of fuselage, upper wings and tail is dark green. The bottom of the plane is light grey, the prop is dark green with yellow tips and it has a red spinner. The insignia is red with a thin white border.

Construction: Before gluing anything together take time to spread out the plans and carefully study the details. Lay out all the parts (which are stamped with identifying numbers matching the drawings). Make sure you understand where everything goes. Notice, also, the scale detailed drawings such as elevator, aileron structures, landing gear and cockpit details.

Lay out all the parts marked with an 'S' number and notice their varying thicknesses. Draw a straight line on one side of 5-7 and then pin it in place with the line toward the ribs. Next draw a centerline on each rib and on the sides of the S-6's toward the ribs. Pin the S-6's in place with scrap balsa under them to raise their centerlines even with the centerline of 5-7. Glue S-8 in place with one S-1 on each side, insuring that the S-1 centerlines coincide with those of S-6 and 5-7. Glue the remaining ribs in place and properly aligned. Allow this structure to dry. When dry, trim down the S-6's and S-7, glue both skins (S-10's) in place, secure with tape and trim the ends. Next, glue the 5-9's in place. Trim the 512's leading edge curve, center them and glue to 5-111s. Next, spot glue these elevators in place on S-7. Also spot glue 5-13's in place, trim and sand this entire horizontal stab to shape. Cut the elevators loose and install the control horn.

Draw centerlines on the W-1's, W-6's and W-11's wing ribs. Pin the W-12 main wing spar in position and while working rapidly, glue the ribs W-1 through W-11 in place. Slip a scrap 1/4 inch sq x 36 in length of balsa under the aft end of the ribs and adjust it so the centerlines on the W -1's, W-6' s and W -11's are all parallel. Pin ribs in place on this strip. Add the W-13's and allow to dry thoroughly. When dry, glue the trailing edge sheet in place and mark the aileron outline on it. Remove this structure from the work surface and install the aileron linkage and aileron horn. Pin structure down on surface (upside down) and add the W-22 (between W-1 and W-2) and then the trailing edge sheet. Build the opposite wing in the same manner and add the W-20 and W-21 dihedral braces as you join the two halves together. The landing gear is installed next. If you choose fixed gear, install the W-16's 17's, 18's and 19's in that order. When dry, add the remaining top and bottom sheet balsa and secure it with tape. Trim the leading edges and add W-14's, W-25 and wing tip blocks (W-23's and W-24's) in that order. When dry, sand to shape and cut out the ailerons, install W-33's, W-31's and VV-32's in that order. The fairing blocks W-22A's, W-26's, W-27's and W-28's are shaped and added when the wing is mated to the fuselage.

The vertical fin and rudder are built 'in hand'. Glue R-6 in place on one R-1. Then add R-2, R-3, R-4 and R-5 in that order. Now add the remaining R-1 and tip block R-7. DO NOT SAND YET! Build the vertical fin in the same manner and spot glue the two together and sand to shape.

The fuselage is round, tapered and extremely difficult to align, but it must be built straight for best performance. Study the plans until you are sure where every last piece goes and how it fits..." 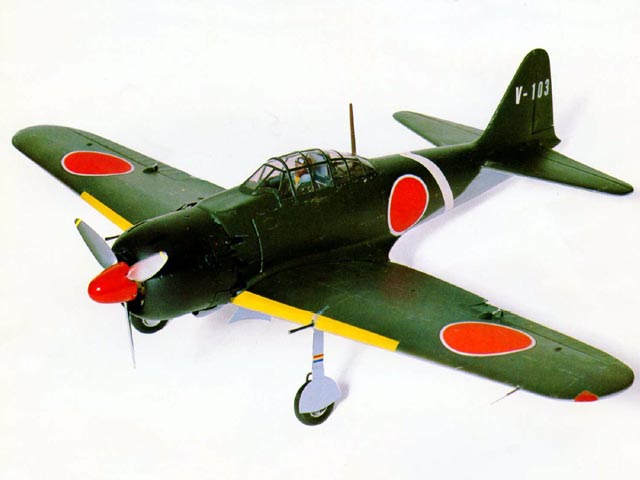