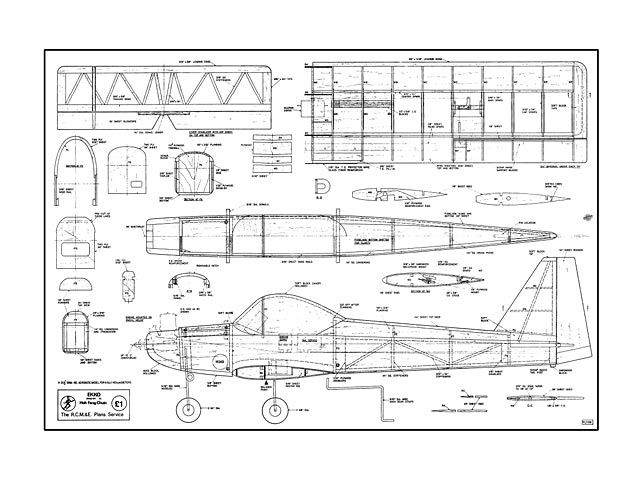 Quote: "All the way from Sweden just for fun - aerobatics, a .35 size low wing model featuring plenty of room for gear, and simple construction. Ekko, by Hoh Fang-Chuin.

Not so many years ago, multi aerobatic flying was practicable only with large models. Reason for this was mainly due to the heavy and space-consuming radio equipment used at that time. People just had no choice but construct a large aircraft in order to keep the wing loading at an acceptable level as well as to provide room for the bulky units employed then.

The situation no longer is the same nowadays. Miniaturisation on the electronic component sector during the past years in conjunction with progress in circuitry design have made it possible to bring forward so small, light and nevertheless reliable outfits that seemed' quite unlikely to many of us just a few years ago.

Consequently, we can now enjoy full house aerobatics flying also with more compact designs, owing to these new mini systems. Despite the obvious economy of a smaller model, both to build and to operate, convenience in transportation perhaps is even more appreciated, particularly if your car happens to be a VW or similar.

Ekko is a fast, smooth flying machine intended for serious acrobatic purposes. It does very pretty figures and handles the FAI pattern excellently. In the design approach, demand upon good performance was naturally put in the foremost place, but functionalism in combination with a realistic appearance were also set as basic goals.

Speaking of appearance, I think that most readers will agree that we see too often good designs bearing a rather unrealistic flat look.

Aerobatic radio control flying has now reached such a high level in so far as fight peformance is concerned that more attention ought to be devoted to the apperance of this type of aircraft.

As regards the functionalism of the design, Ekko truly possesses a high degree of serviceability, even under field conditions. You will notice that the amount of built-in arrangements, etc, have been kept to an absolute minimum in order to facilitate the handling of the model.

The entire nose section has been made as basically functional as possible because most troubles encountered usually gather right at this portion of the model. For this reason, the engine employs an upright open installation for maximum accessibility. Also, the fuel system, nose gear assembly, etc. are easily to be reached for inspection or adjustment from fuselage outside through a removable hatch. The hatch itself is simply retained to the compartment with two screws.

Ekko employs a straightforward and fast building construction system. Both the wing and horizontal tail feature constant chord layout for easy and quick assembly. We have heard lately that wing with swept leading edges might offer somewhat better flight characteristics, but opinion on this is divided. Until complete knowledge has gathered on this subject, constant chord for simplicity and accuracy.

Another laborious process is plastic moulding of canopy. Because of the particular shape of the canopy used on this model. a suitable commercial one was not possible to obtain. To simplify the installation of this item, balsa blocks were employed. Besides ease of construction, balsa block canopy also is more solid than one in moulded configuration. Incidentally, strength at this place is not entirely insignificant with regard to the size of the canopy used here.

In so far as flying capability is concerned, performance of Ekko is comparable with best .60 jobs. Design concepts follow in general proved conventions but particular ideas from other aircraft have subsequently influenced the final layout.

Probably the most distinguishing feature of the model is its deep fuselage. This in conjunction with a huge vertical tail really are appreciable especially at knife edge attitudes. The deep fuselage also is an asset in manoeuvres such as Slow Roll and Figure M. Furthermore, the ability of maintaining headings in some manoeuvres is improved by the large fuselage side area.

We know from past experience that excessive dihedral appears to cause barrelling in roll manoeuvres. On the other hand, a flat wing has poor stability in lateral plane. To reach a satisfactory compromise, the dihedral was made about 2 degrees on each wing panel. This amount of dihedral combined with a fairly short and stubby wing have made it possible to perform nice constant and axial rolls.

The choice of full symmetrical wing section is for quite natural reasons. In addition to the fact that symmetrical section is unequalled in inverted flight positions, this airfoil also seems to provide better grooving quality, especially under turbulent conditions.

Ekko measures 50 inches in wingspan and 460 square inches in area. Suitable powerplant would be engines of .23 to .40 capacity. A .23 engine would be about as small as practical. With this engine size the model should be pretty docile to handle but vertical manoeuvres might be difficult to execute. A .35 engine is about the best size for this design. This engine size would develop enough power to pull the machine safely through the entire schedule, yet at level flights the speed would not be excessive. Above .35 I think that the model would be something like a speed demon, more suitable for racing work (Open Pylon), perhaps, than for precision aerobatics.

The prototype was powered by a Super Tigre G21/35 engine. The radio outfit was KO Digiace 4-channel digital proportional. With this installation, the all-up weight was approximately 4-1/2 pounds which is a little bit on the heavy side. I would suggest that you do not exceed 4.25 lb limit on your Ekko.

As you can see on the plan, materials specified often are on the large side. This has been done intentionally because it is more convenient and rewarding to work with oversize wood than thinner and harder materials. To keep the weight under control, therefore, it is necessary to select balsa wood only of medium density throughout the entire construction.

Because of the nature of the design, it should not be attempted by builders who have no previous multi experiences. However, those who have built and flown similar aircraft successfully should not encounter any difficulty to handle this model.

The construction is very straightforward and should require little explanation. The wing can be built in one piece, or each half may be built separately, joined at proper dihedral angle when ready for sheeting. The ailerons are built integrally with each wing half, cut out after the sheet covering is completed. The fuselage side panels are prepared with specified reinforcements prior to assembly.

To assemble the fuselage, formers FB and FC are first cemented to the sides. The sides are then pulled together at front and rear before the remaining formers, etc. are added. Rest of the building process is quite obvious so I will not go into further details.

Finishing technique usually is a matter of personal choice. Whatever method you use, make it as light as possible. To obtain a long-lasting shining finish, the final fuel-proofer should be of good quality. I used an epoxy-type proofer on my original model which gave a very satisfactory result.

There is ample room in the fuselage for any of the new digital systems. The servos are mounted on a 1/8 plywood plate, the plate itself is then fastened on hardwood rails with sheet metal screws. The photographs show tank and radio gear installation in detail.

Normal checking procedures are to be followed prior to test flights. The engine downthrust is not very critical, actually. You can very well start without any off-setting, applying downthrust as needed. The Centre of Gravity should be located as shown on the plan. Under any circumstances the model must not balance farther rearward than 3.5 inches from the leading edge.

Flying the Ekko should not present any problem to modellers who have flown this type of aircraft before. You will find that the model is very exact and responds instantly upon your commands. The low-speed characteristics are excellent, especially with engine running. Without power, Ekko will run out of elevator sooner than you might expect, so keep this in mind if you should make any emergency landings." 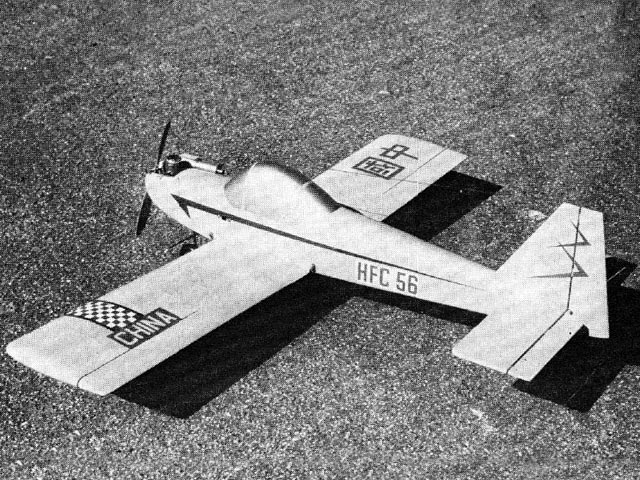 What a great plan, thank you, and Happy Christmas!
John Green - 27/12/2021
This is my Ekko as designed by the late Hoh Fang Chiun [pic 005]. It was published in American Aircraft Modeler and it is with no doubt a very attractive model. Easy to build but with a fair flying performance. Perhaps due to my elevation of 2650 meters closer to the stars, the model flew very fast and had a terrible glide ratio for both powered and dead stick landing. So I decided to make a new wing extending it one rib bay on each size. It improved a little but not much. I also blame the wing section which is very thin. My Ekko was powered with a K & B .40 engine, controlled by an Aero Sport (Futaba) RC, Fuselage painted with HobbyPoxy and wings covered with Monokote. Eduardo Barriga, from La Calera, Colombia
Eduardo - 22/06/2022
Very nice Eduardo... Any more pics? Have always been a fan of Hoh Fang Chiun designs (I believe there are a few more fans out there), but sadly, not many appear to take the time to actually build one, myself included. Always found this design to be a good mix of a basic and straightfoward pattern platform with a bit of cuteness mixed in (you really captured the look of the somewhat caricaturesque canopy). IMO... 2,650 meters is way up there, so probably not really fair to expect a good glide ratio from any design, except perhaps, a Kaos.
RC Yeager - 22/06/2022
Thank you. Yes, I know any stunt model does not have the glide ratio of a Junior 60. I was referring to the fact that landing speeds and dead stick landings come out very fast as well as some stunts like loopings etc, mostly due to the thin wing section. A Kaos and the Kwik Fli, for instance, have beautiful flying performance at my altitude because they have nice thick wing sections. With a much thinner atmosphere than at sea level, planes have to fly faster and need more power. That is why thicker wing sections perform better here.
Eduardo - 22/06/2022
Beautiful plane Eduardo,congratulations great job in the chinese design.
Carlos Bolaños - 26/06/2022
Add a comment