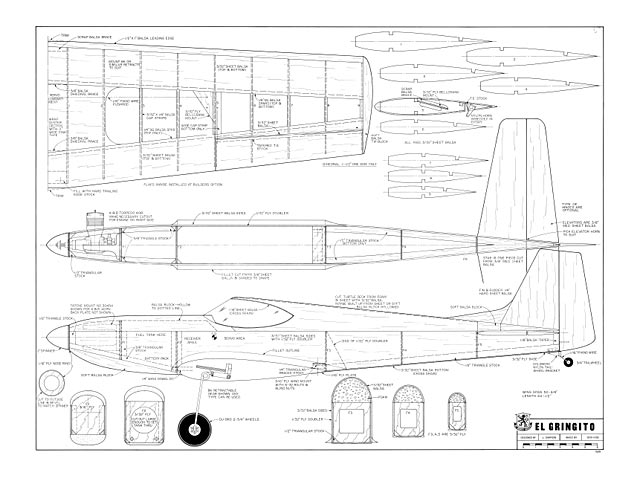 Quote: "Loosely translated, 'El Gringito' means the 'Little White Man'. As you can very plainly see, it is the smaller version of the now famous El Gringo (oz6009) designed by the renowned competition pilot, Ted White. What you don't yet see is the story behind this plan.

Ted White has been a very dose friend of mine since 1964 when we flew prototype F&M radios together. He and I have probably had more fun at this great sport than any other two people I know. This plan and story are, therefore, dedicated to Ted White and our friendship.

In 1964 we built many airplanes and food a plane called the El Toro (oz1529) designed by Marty Moad of Las Vegas, Nevada. Marty's plane had a very thin symmetrical wing and vaguely similar lines to a P-51C and performed a spectacular maneuver consisting of a vertical full speed dive, with rolls, followed by a very low pull-out! That, notwithstanding, the fast and flashy El Toro provided some inspiration for the original El Gringo.

Ted designed the El Gringo and, although I have built many of them, it is nevertheless 100% his own creation. Throughout its development, and in fact, to this very day, Ted and I argue the relative merits of symmetrical versus semi-symmetrical wing sections. Obviously, I prefer the semi-symmetrical airfoil and I am dedicated to its development exactly the same as Ted is to the symmetrical foil. Ted's wife, Dorothy, asked me once why I didn't use Ted's theory and I told her couldn't very well do that for the same reason we have Fords and Chevys, Democrats and Republicans, et al.

The fact that this plan of the El Gringito appears with a symmetrical section just as Ted meant it to be is my salute to him for his outstanding creation and his unparalleled flying ability. It also becomes a fringe benefit to those who will not build a big plane and I know quite well how many modelers feel that way. Built correctly, this one will not be squirrely as is all to often the case with the smaller Pattern ships.

To build this plane rapidly, cut the fuselage sides from 3/32 sheet balsa and add the triangular stock as shown on the plans. While this assembly is drying, cut the formers and plan your engine installation. The firewall is simply a rectangle to hold your engine moot and its size is determined by measuring the side and top view at the distance aft of the 1/16 plywood ring former dictated by your particular engine..." 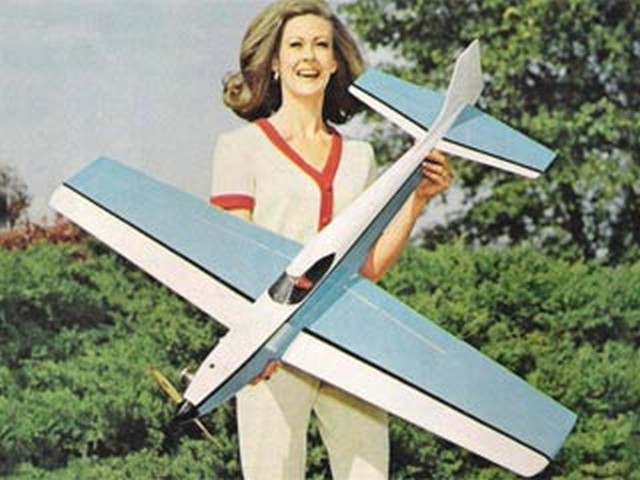 Please find photos of my recently completed El Gringito, which I built from plans downloaded from your website [more pics 003, 004]. Thanks for the great service you provide!
Alfons - 11/06/2019
Add a comment