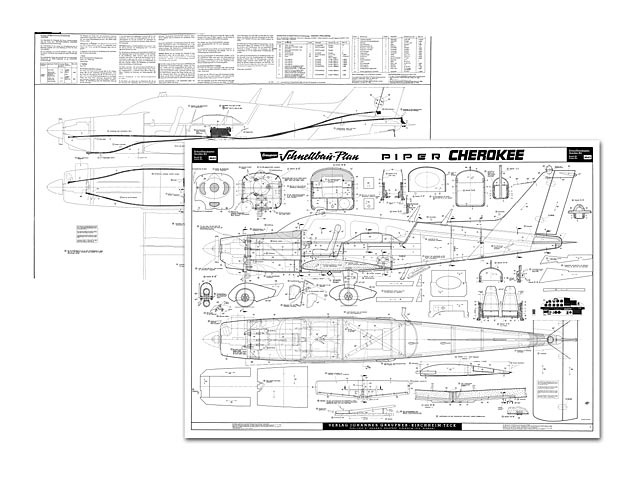 Quote: "Hello everyone, Here is the plan and the layout of the R/C installation of the Piper Cherokee Graupner Construction Kit. Cordially, Alain"

AS ONE has come to expect from Graupner, this kit is superbly engineered and the last word in prefabrication, complete down to the linkages and the last nut and bolt. Also included with RM's review sample (but sold separately) was the accessory pack, containing vacuum-formed plastic components for the cabin interior fitting and spats.

The large box contains many sheets of die-cut balsa and ply parts, fin and tailplane from 3/8 sheet, ready shaped and sanded, a bundle of stripwood, a precut 3/8 ply nose former, together with the under-carriage bent to shape from plated wire. To eliminate planking, the rear top deck shell is formed from two laminations of 1/16 sheet, bonded together. The giant canopy is moulded from really substantial acetate type material, to provide the cabin glazing and roof.

The fuselage sides are in one piece, with obechi reinforcement already bonded in place. The foam wings are obechi veneered and of a semi-symmetrical section, with balsa leading and trailing edges already in place and sanded to contour - the trailing edges even being ready slotted to take the hinges!

Getting it together: The construction technique is similar to that of the Graupner Monsun in that the fuselage sides have additional reinforcement of pine strips and ply wing seats added whilst screwed down to the building board with the jigs provided. This sets the curvature of the nose but, being wide, the sides are made up from narrow lengths of 1/8 sheet, and in my case had split in several places - as well as being strongly curved outwards due to the bonding of the obechi reinforcement - and took a fair amount of steaming, and persuasion to remedy. However, there were no other problems with the fuselage assembly, and it went together perfectly and quickly, the rear top-decking fitting with only the minimum of trimming.

The wing assembly consists of cutting out and lining the servo box, extending the machined u.c groves and fitting the blocks. The two halves are then joined and reinforced with tape and epoxy in the usual manner, tip blocks fitted and sanded to contour, likewise the centre-section trailing edge. The latter is of hardwood and does not match the wing section, so some fiddling was required here. The ailerons do not match the wing section either, so that when the tip blocks are carved/ sanded to shape, the ailerons are proud of the tips - small snags, but a little irritating in a kit of such generally high quality.

The formed ABS plastic wing-to-fuselage fairings are a good fit, though some care is necessary in trimming them to size. Similarly, the cowling fits well except that it's necessary to trim some 1/4 to 3/8 in forward of the groove on the moulding, in order to have it fair correctly into the fuselage.

Assembly of the wings to the fuselage is by the usual dowel-and-bolts. The captive nuts are bolted through the fuselage sides and the heads covered with a small plastic fairing - not very 'scale' - so I recessed the bolt heads into the fuselage sides with an additional 1/16 ply plate, cut from scrap, on the inside, and covered the head with filler - much neater. The profile cut in the fuselage sides is very accurate and fits the wing well, although, in order to use seating tape as I did, it was necessary to trim some kin. all round.

The engine installation shown on the plan allows for an extension piece, using a standard silencer which sits in a groove in the fuselage bottom, but I decided to use a 'dustbin' type, which is almost hidden in the cowl, along with the HP .61 to which it is attached.

Finishing: I usually cover with film but, on the Cherokee, there was this vast expanse of canopy (not forgetting the plastic cowl and fairings) which would require paint application. What I did was still cover in film but overlapping the cabin moulding by 18 in., then masking off the line of the film - and the windscreens of course - and sprayed with white 'Aerogloss' aerosol. I sprayed the other plastic parts too, finally adding the transfers and film trim.

Installation: The radio installation shown is, as usual, for German equipment, but only one modification was required during construction, which was to enlarge the aperture under the tank for my nicads; you may have to arrange the tube runs, to suit various servos. As no 'throws' are suggested, I set the ailerons at 7/16 in up and 5/16 in down, with the elevator at 1/2 in each way and rudder at 1/2 in. With everything in place, the CG came out a fraction forward of the indicated position, and this is how it was flown.

Flying: Out on the field, the weather was fair but, being a coward, I gave the 'box' to my friend Geoff Allen to make the first flight - but I need not have worried as, apart from a touch of right rudder to get her tracking right, she was away, hands off - straight as a die.

Perhaps my HP .61 is not in its prime, for it hauled the Cherokee round in a sedate manner, not as fast as I had expected - probably due to the weight, which is around 7 lb (though, in fact, the design weight is over 8 lb). It certainly suits my type of 'Sunday Flying', nice and easy and smooth. It doesn't 'groove' but it will certainly do all one asks of it - and it will probably do the book (as Graupners claim) in the hands of a fully aerobatic pilot.

The model flies like a big machine - smooth and stable, and landing is easy; just line her up and flare out in the right place. No nasty tendencies like tip stalling. Aileron authority is there all the way on the approach, even on a deadstick landing, and you can really stretch the glide if you are undershooting. If the motor cuts, as has happened to me occasionally, the glide is really slow and flat, so one must allow quite a long approach or it is very easy to overshoot.

Loops are smooth and large; the roll-rate is slow but steady; inverted flight needs some down held in, probably due to the -1.5° incidence on the tailplane. (Incidentally, elevator throw was increased to 5/8 in each way after the first flight, for more positive pitch control).

Summary: The Cherokee is a lot of kit; a good-looking, smooth flier, if a trifle on the expensive side. For this sort of money I want perfection - and Cherokee is not too far off, apart from the points mentioned.

It's just a wee bit disappointing, however, that for such a well-known aeroplane the model is so very 'semi' scale. There are many departures from the prototype - the most obvious being the tapered wings, but it also has a stretched and slimmed - down fuselage. As an attractive sport flier, though, which will draw many an envious eye on the flying field, and above it, one couldn't want better."

Quote: "Hello, here is the Exploded View of the Piper Cherokee Graupner oz13498, maybe you already have it. Thank you for your site. I wish you the best for this year," 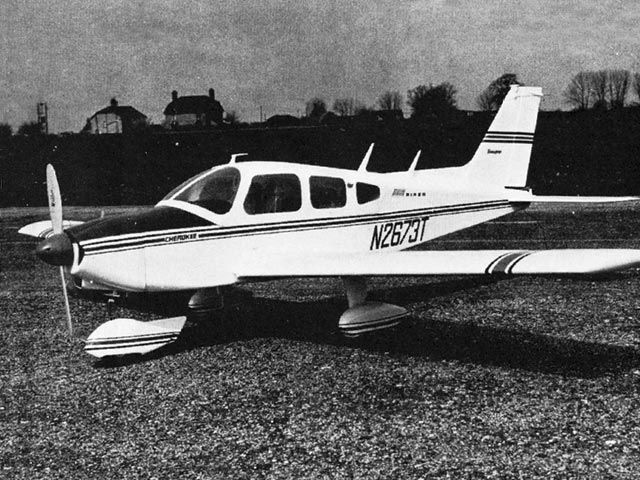 In 2009 Graupner rekitted the Cherokee in fully prefab ARTF with the same dimension, just a little lighter.
Manuals for both version. Pit
Pit - 17/12/2021
Add a comment