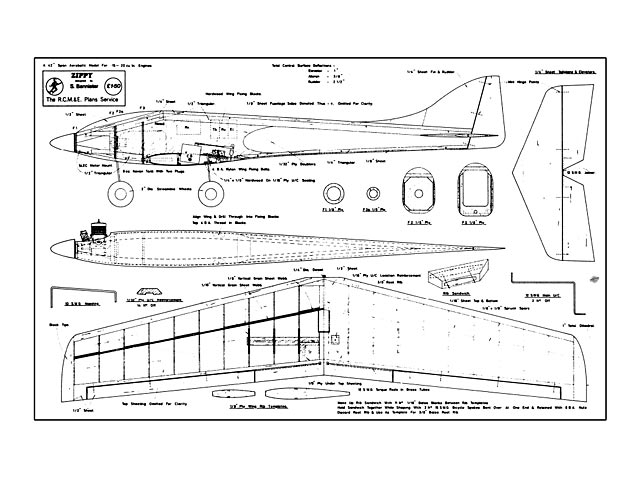 Quote: "Zippy, by Sean Bannister. If you like aerobatics and like your models small, try this 42 in swept wing design for .15 to .20 power. Two functions on ailerons and elevator are all you need, or fly it full house as on the prototype.

HAVE you ever fancied an aerobatic model capable of the full FAI schedule, that will also go assembled in the boot of your car? Such is 'Zippy'. Apart from the convenience, I have always had an attraction to small models, the design presented here combining the experience gained with four earlier models of a similar size.

My approach to a new design is to decide the performance criteria and then blend the necessary features into the new craft in an attempt to fulfil these demands. Examination of the new FAI schedule revealed the necessity for a high power to weight ratio to cope with the vertical rolling manoeuvres and again for the hesitation and slow rolling manoeuvres which also demand generous side and rudder area.

I also made a point of keeping the rudder's centre of area as close to the thrust line as possible to minimise its rolling component, so that, as shown, full rudder deflection will induce only a slight rolling tendency. But, as only half rudder throw is adequate for the hesitation and slow rolls, the rudder rolling force component becomes negligible and full rudder deflection is reserved for the spin.

At this stage, my sparse collection of motors revealed a redundant Super Tigre G15 originally set aside for Quarter Midget pylon racing. Having thus settled on a powerplant, consideration was given to the wing. Experience had shown that the complete model would weigh about 2-3/4 lb (44 oz). All the smoother flying 61 size aerobatic models appear to have a fairly high wing loading of about 30 oz/sq ft, so my model would need a fairly high wing loading to achieve the required smoothness of flight. For an equivalent performance with a smaller wing, the loading would have to be reduced slightly (Mr Fredney could explain why), so 24 oz/sq ft was selected as a target giving an area of 1.8 sq ft.

As a swept tapering planform looks attractive, this was adopted and used in conjunction with a wing section which progressively increases towards the wing tip, disguised because the tapering planform still allows a decrease in the actual wing thickness from root to tip. The thicker wing tip will then stall at a lower airspeed than the rest of the wing, allowing slow nose-up landing approaches to be performed with confidence. As an extra safeguard, the ailerons were stopped 2 in. short of the tip and kept narrow to eliminate tip stalling encouragement from the down going aileron.

Next on the agenda was wing section. A relatively thin section was selected because the powerplant is a racing unit and will only be happy at speed. The leading edge was kept blunt to enable the model to slow down more quickly when the throttle was closed and the choice of a fully symmetrical section was obvious to minimise changes in trim from upright to inverted flying and enable a zero datum, thrustline, wing and tailplane incidence set-up to be used. 12 per cent thickness ratio is therefore used at the root, increasing to 15 per cent thickness at the tip and thought was now given to aileron shape. Pure strip ailerons tend to cause more drag than effective rolling moment close in against the wing root, so the ailerons were spaced well clear of the fuselage and linked to the aileron servo using torque rods, used because of their positive action and simplicity of installation.

Unlike free flight models, multi channel R/C aircraft can utilise very small tail surfaces but as this model is quite small to start with, a minimum of 20 percent of the wing area was considered desirable and sketched out to match the wing planform. Laying out my radio gear, engine and tank on the drawing board, the fuselage was drawn and the details worked out. Selection of a 6 oz. tank was dictated by the thirsty nature of the ST.15 motor running at high revs on a 7 x 6 propeller. Tail moment was kept fairly long to reduce elevator sensitivity and 20 percent centre of gravity was chosen, well forward to encourage flight smoothness.

Construction: As this is not a beginner's model and most experienced modellers have their own ideas about construction techniques, I will only outline the main construction points. All the balsa used is of the medium soft grade except for the wing leading edge and 1/8 sheet fuselage sides which are medium hard balsa.

Wing: A centreline is drawn along each rib and also along the 1/2 in leading and trailing edges and the two wing panels are built inverted. The leading and trailing edges of each panel are now pinned to the building board and packed up on scrap pieces of A in. sheet. The ribs are positioned and alignment of the centre lines checked, the top spar added and finally, the 1/16 cover surface sheeting which has previously been joined and sanded is positioned with contact adhesive..."

Update 6/1/2022: Replaced this plan with a cleaned up version (essentially redrawn from scratch), thanks to TonyP. 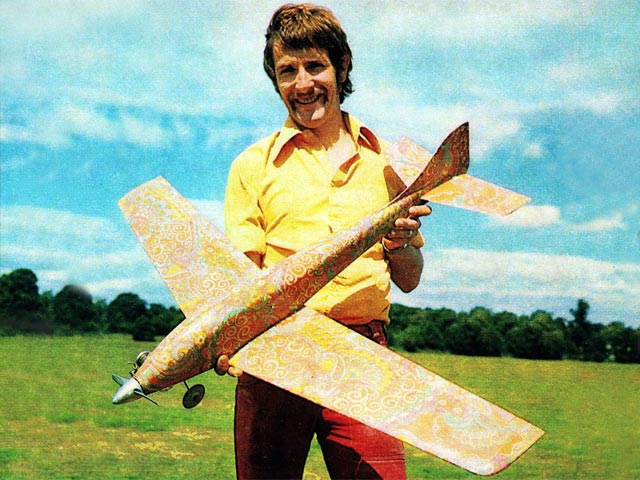