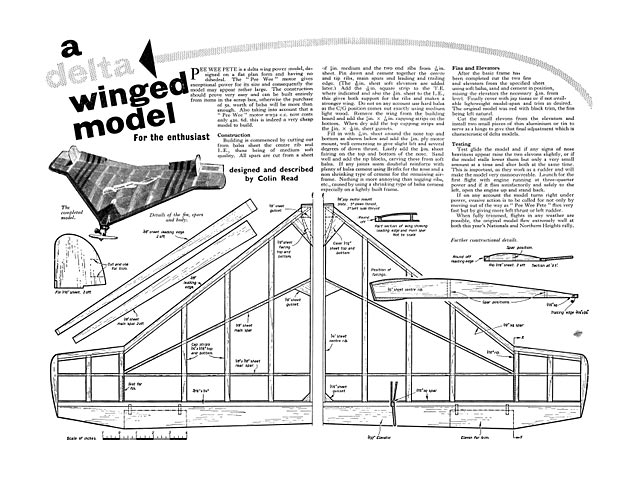 Quote: "A delta-winged model, designed and described by Colin Read. Pee Wee Pete is is a delta wing power model, designed on a flat plan form and having no dihedral. The 'Pee Wee' motor gives exceptional power for its size and consequently the model may appear rather large. The construction should prove very easy and can be built entirely from items in the scrap box, otherwise the purchase of 5s worth of balsa will be more than enough. Also taking into account that a Pee Wee motor .032 cc now costs only 42s. 6d. this is indeed a very cheap model to build.

Construction: Building is commenced by cutting out from balsa sheet the centre rib and LE, these being of medium soft quality. All spars are cut from a sheet 1/8 medium and the two end ribs from 1/16 sheet. Pin down and cement together the centre and tip ribs, main spars and leading and trailing edge. (The 3/32 sheet soft elevators are added later.) Add the 1/16 square strip to the TE where indicated and also the kin, sheet to the LE, this gives both support for the ribs and makes a stronger wing. Do not on any account use hard balsa as the C/G position comes out exactly using medium light wood. Remove the wing from the building board and add the 1/4 x 1/16 capping strips on the bottom. When dry add the top capping strips and the 1/8 x 1/16 sheet gussets.

Fill in with 1/16 sheet around the nose top and bottom as shown below and add the 1/8 ply motor mount, well cementing to give slight left and several degrees of down thrust. Lastly add the 'yin. sheet fairing on the top and bottom of the nose. Sand well and add the tip blocks, carving these from soft balsa. If any joints seem doubtful reinforce with plenty of balsa cement using Britfix for the nose and a non shrinking type of cement for the remaining air-frame. Nothing is more annoying than sagging ribs, etc, caused by using a shrinking type of balsa cement especially on a lightly built frame.

Fins and Elevators: After the basic frame has been completed, cut the two fins and elevators from the specified sheet using soft balsa, sand and cement in position, raising the elevators the necessary 3/16 in from level. Finally, cover with jap tissue or if not available lightweight model-span and trim as desired. The original model was red with black trim, the fins being left natural.

Testing: Test glide the model and if any signs of nose heaviness appear raise the two elevons slightly, or if the model stalls lower them but only a very small amount at a time and alter both at the same time. This is important, as they work as a rudder and will make the model very manoeuvreable. Launch for the first flight with engine running at three-quarter power and if it flies satisfactorily and safely to the left, open the engine up and stand back.

If on any account the model turns right under power, evasive action is to be called for not only by moving out of the way as Pee Wee Pete flies very fast but by giving more left thrust or left rudder.

When fully trimmed, flights in any weather are possible, the original model flew extremely well at both this year's Nationals and Northern Heights rally. "

Quote: "Here is a clever design from the prolific Colin Read. In the late 50's and early 60's aeromodelling was so popular that designs used to be published in magazines other than Aeromodeller and Model Aircraft. This one is from Newnes Practical Mechanics for November 1960.

Note how fulsome Read is about the Pee Wee. I pleaded with my Dad to get me one for Christmas. My uncle's London surgery was opposite Ripmax in Camden so when Dad was visiting he popped in to buy one. Presumably the salesman did not have one as he persuaded him that what I really wanted was a DC Bantam. For my first flight the Bantam crank broke but, truth be told, so did the cranks of the successive Pee Wees I subsequently acquired." 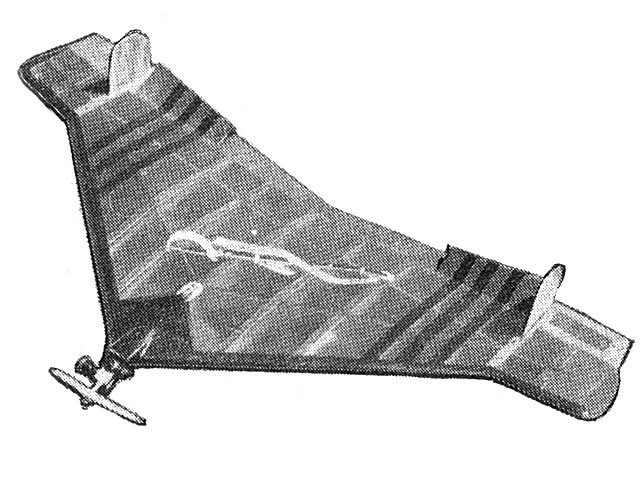