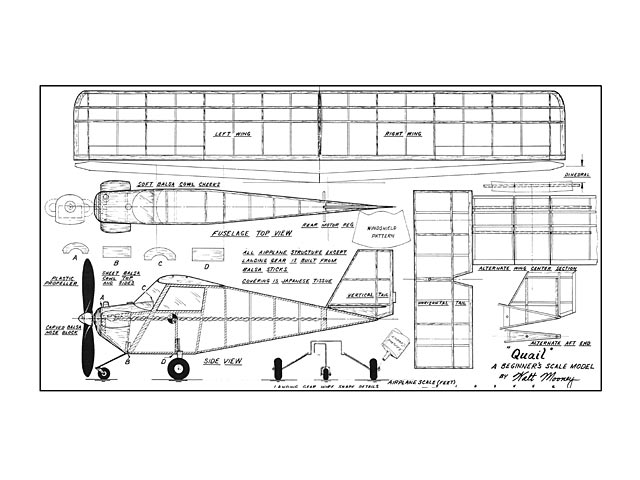 Note pic 003 was found online at https://www.hippocketaeronautics.com/hpa_forum/index.php?topic=17017.0 and shows completed model by scigs30, built to 200% size. More great pics in that thread, worth a look.

Quote: "2-in-1 scale for the beginner: Aerosport Quail, by Walt Mooney.

The Aerosport 'Quail' is such a simple model that Walt is presenting a 'Glue Part A to Part B' article for a double-Peanut size (26 in) version for beginners. Peanut plans on next 2 pages.

The Quail is a simple cantilever (no struts) monoplane design for home-builders. It is an all-metal, tricycle landing gear, high-wing monoplane with a conventional tail. It was designed to be powered by the Rockwell 600 or the Volkswagen engine. It is a single-place airplane with very good performance.

The real airplane design lends itself to being modeled very simply and is an ideal beginner's scale model. Simple, standard construction techniques are used throughout. Because this can be a first scale model for a novice, and because we haven't done so in a long time, this will be a complete 'put part A with part B' type of construction article.

The model is drawn with scale dihedral, but has an enlarged horizontal tail to enhance flight characteristics. A scale length landing gear is used because it looks right and because it limits propeller diameter. A longer propeller would tend to give increased flight times, but it also might increase the beginner's trouble with adjusting the model to fly because it would be more destabilizing than the smaller propeller.

Although the model is published as a Peanut (13-inch maximum wingspan), the plans are drawn twice Peanut size (26-inch span) because the beginner will have an easier time handling the larger size materials. This larger size model is the one that is described in the following construction article. The Peanut size model can be built similarly; the models in the photographs were built with an alternate wing centersection and tail surfaces so they can be disassembled and carried in a small box. This approach is not for beginners and can be accomplished by any experienced model builders without further instructions. For the Peanut size model, the omission of every other wing rib and the fuselage uprights not hatched is recommended.

The Peanut version shown has de-mountable landing gear which fits in slots in the fuselage, and the wings and tail have tubes to accommodate round bamboo stub spars. Disassembled, it fits in the 8 oz See's mint box as shown. It's easy to carry on a trip but probably not suitable for a beginner.

Let's start the construction of a beginner's scale model. There is a specified order to making this model. Why? The main reason is to take on the construction of the simplest parts first so that a beginner can learn and practice increasingly complex construction techniques as he goes along. If you are a beginner, follow the instructions in the sequence presented and you should be able to make a respectable first scale model with a little patience. Try not to be in a hurry..." 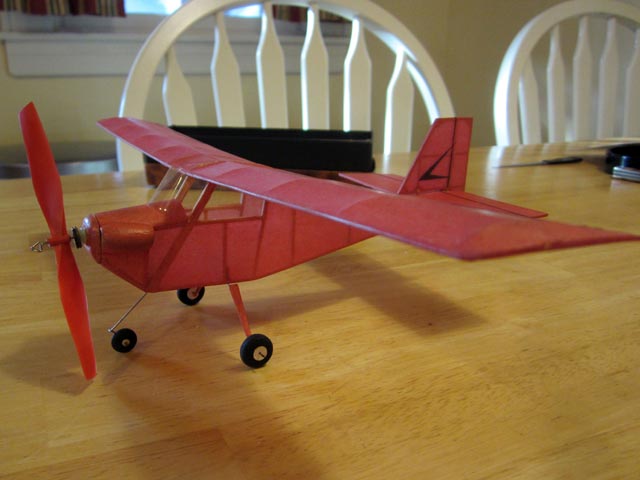 Attached are some photos of the Aerosport Quail [main pic, 004, 005]. I built this when the model was first published in Model Builder. I built it so that it could be disassembled using tissue tubes and bamboo dowels, as shown on the plans.
WalterK - 07/12/2021
Add a comment