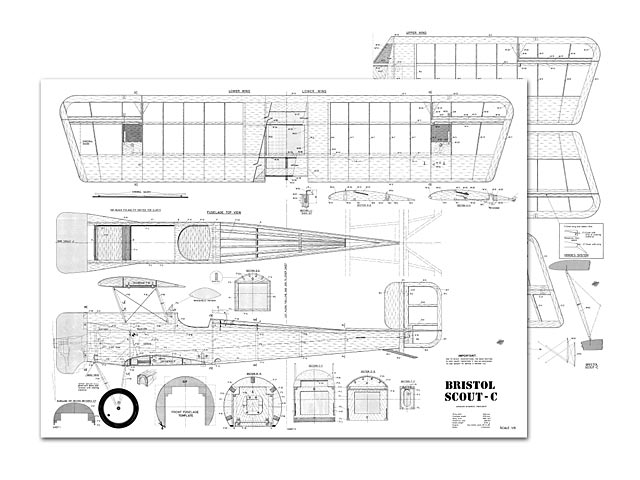 Quote: "New Svenson kit of the Bristol Scout for 40 to 60 engines. Reviewed by Martin Fox.

This being the first time we have been asked to review a radio control model kit we were naturally most excited to get the box open and pour out the contents. This was particularly so because the model in question was a WWI type machine and a biplane to boot. The great Ernst Udet always said two wings are better than one - if you can't have three.

The Bristol Scout Model C is manufactured by New Svenson Models, now in Belgium, and readers will remember the excellent products put out by the original Svenson Company in Sweden before their demise. It was with the latter thought in mind that the box was opened and the contents inspected.

Kit contents: Now, this model is a builder's aeroplane, none of your 'shake the box twice and it comes out ready made' stuff here! Obviously, therefore, there is a lot of balsa wood, ply and other bits and pieces. The quality of the balsa parts is excellent, the ribs being die cut in sheets, and bundles of balsa strip for fuselage members and wing and tailplane leading and trailing edge are also of good grade.

Other parts consist of a moulded cowling in two parts. plastic moulded machine gun, pilot, celluloid for windshield and assorted fittings. The kit also contains a roll of Polytex covering material, but more of this later.

The firewall and fuselage formers are in very good grade plywood, but the die cutting in our kit was found to be really die-marking and all the plywood parts had to be cut on the fretsaw. A close examination of the contents began to reveal a few deficiencies, for instance, there were no wheels in this kit (we have seen other kits where these were included), There was only one sheet of decals, ie top wing and one side of fuselage and fin only.

Building: If you have guessed that the construction involves a little more than assembly you are right. As stated before it is a builder's model, but having said that we would not wish to give the impression that it is difficult to build. Far from it, everything is ultra simple and very little cutting, sanding or shaping is required.

The fuselage sides, partly pre-cut, are laid down and are marked to locate the ply formers. Doublers are added at the front where indicated and the half round formers for the front end stringers are also placed in position.

We are fortunate to possess a jig board so the fuselage sides could now be accurately positioned against the ply formers. It was at this point that a little frustration began to set in because we found that Former F1 didn't fit, being 1/8 short either side a formers F10 and F12 were missing from the kit altogether (so much for our preliminary inspection!) The pieces were made and the fuselage completed, except for the 1/2 x 1/8 in side stringers which were also missing.

This caused us to re-appraise the kit contents before proceeding further and we found that one wing leading edge moulding was missing, W15 trailing edge spar was not pre-shaped as indicated and there was nowhere near enough 1/4in. square to complete the model. We can only deduce from this that our example of this kit had been carelessly packed and there is no real quality (or should this be 'quantity'?) control at the factory.

The wings, by contrast, were constructed in no time at all, all parts being an excellent fit to each other and apart from the pre-shaping of the spar mentioned above both wings went together very well indeed. Similarly, the tailplane and fin construction was quite straightforward, conventional and presented no difficulties.

The supports for the servo trays were added next and radio flight pack installed, temporarily within the fuselage. The radio is Futaba four function equipment.

The wirework was then added for the undercarriage and interplane struts and of this commodity there was ample.

Next came the covering and, as mentioned, Polytex is supplied with the kit. Once again our frustration bubbled over as measure it every which way we tried, it because obvious that again the manufacturer had been either parsimious or careless.

We covered the tops of the wings, tailplane and top and sides of the fuselage with the material supplied and the bottoms of the wings, tail and fuselage with Solartex (purely because we had it in stock). After shrinking, the whole airframe was given two coats of thinned polyurethane with an extra coat of full strength around the engine bay area. Williams WW1 wheels were fitted in lieu of none in the kit, and the plastic pilot was installed. The cowling was then added and some little ingenuity was required to make this fit, the problem being not that it didn't fit the model but that the two vac-formed cowling halves were not a very good match.

Flying: The model being only 49-1/2 in span and with a specified all up weight of 4.6 lb we assumed that our trusty OS 40 4-stroke, which happily flies 7-1/2 lb of twice size Ladybird, would suffice. In practice this was not so and an HGK .49 two-stroke was sub-stituted. In fairness to the manufacturer, they do specify .40 to .60 motor so if you are a 4-stroke buff it will have to be a .60 minimum. Incidentally, our all-up weight came out at 5lbs.

To bring the CG to the indicated position on the plan required slight rearrangement of the battery pack plus the addition of 16 ozs of lead bolted to the front bulkhead and it is highly likely that this additional weight contributed to the failure of the OS 40 4-stroke to lift the machine, now weighing 6 lb, off the ground! However, no such difficulty was experienced with the HGK and the model flew just as you would expect a WWI type to do.

A number of flights have been made and the model has proved to be very docile and extremely forgiving. Recovery from basic maneouvres is good and ground handling from a model with forward undercarriage and well forward CG is also surprisingly good. In short, almost a beginner's scale model.

To summarise, the quality of the materials supplied is very good and the die cutting in balsa is excellent. The plywood parts are of good quality but the die cutting leaves a little to be desired. The main criticism was that, in our kit, a number of items were missing and they had been parsimonious on some of the wood sizes and covering material. They were certainly correct when they state on the box 'additional materials will be required to complete this model'.

This little moan aside, and which we think is due to carelessness rather than malice aforethought, we think the kit represents reasonable value for money. A word here about the plan. This is quite up to the standard of the old Svenson Company ie well drawn and printed, and contains sufficient information and instructions for even a beginner to produce the model.

While the finished model can only be described as stand-off scale (it depends how far you stand-off!) when produced from the kit obviously a lot of gee gaws can be added and paintwork applied to improve the scale appearance. However, in the air, which is really what we are about, the true flavour comes through. If you are looking for a model that you can build and then 'gawp' at it as you fly it round your nut then, this is the type of model for you. Docile, easy to fly and forgiving and, generally speaking, built like a brick outhouse. 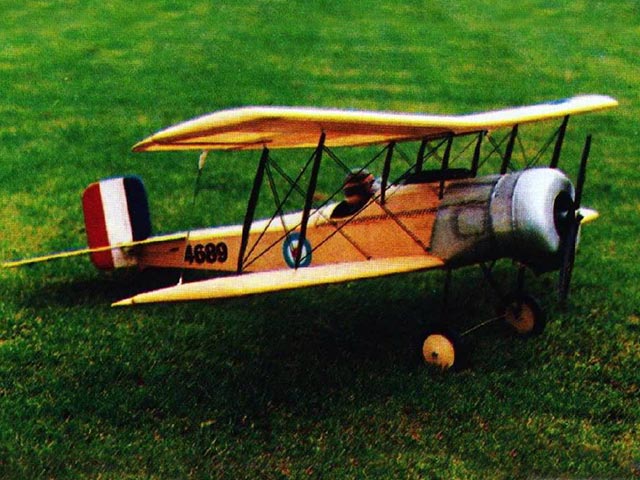