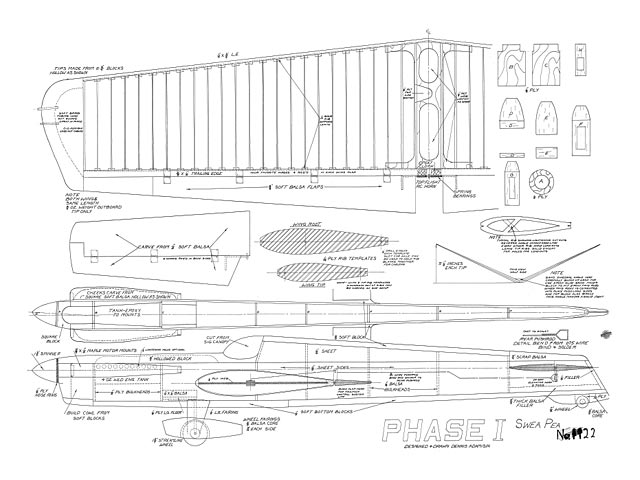 Quote: "The Sweet Pea is my newest hat in the stunt design ring. It is a notch different than most stunt ships. The V-tail not only opens a whole new series of designs but seems to improve the plane's flying ability. This airplane is the first 'full stunter' I have built with a V-tail, though it is actually the third development model in my V-tail series. Number four is on the board right now, and by the time you read this it will probably have been flown and evaluated. I do not believe in building the same airplane every year.

In 1965 my brother flew his first original design at the Nationals. That year marked the last time anyone in our family flew a kit design. Since then we have designed our own airplanes.

The Sweet Pea represents the present cog in our design machine. Since 1965, an impressive array of shapes has come off our drawing board with approximately half the designs actually built. The shapes have included jets, pure original, semi-scale and novelties. Variation in the design has been more than superficial; we have experimented with wing configurations, airfoils, stab and flap configurations, moment arms, wing and stab positions in relationship to the thrustline, size of the overall airplane, wing loadings, power loadings, tail-draggers, trike gears, tandem gears with tip skids, twin rudders, single rudders and, in the case of this craft, no rudder.

After all these different designs we have reached a conclusion; Keeping the basic designs similar, the number of good flying aircraft but different-looking designs is endless. Building the exact same airplane every year because you are afraid to change is silly. All it does is put you in a rut which gets deeper each year. Even if you are successful in competition, there is eventually and inevitably a time when you will be beaten. Anyone who builds the same plane year after year without innovating or experimenting is not going to have experience with different designs, and therefore will not know in which direction he is going. Also, no two airplanes - no matter how similar - have ever flown exactly the same; they may all fly well but are just a little different. A slight difference in relativity, turn radius, line tension and engines can mean a different flying plane.

I consider bath these views irrational and unfounded. Many modelers in different parts of the country, including my own, have dropped appearance paints at local contests in an effort to improve participation. They have found that in the long run only Stunt fliers participate anyway. All stunt planes are time consuming to construct. If you want to be competitive in this event, you have to build one; if you don't have the desire or ambition to do this, you can forget about competing. I partially agree with those who contend that Stunt is a flying event. The existence or nonexistence of appearance points is not going to make it easier to spend long, grinding hours practicing. A major difficulty is the way some judges score. In four days of flying at the 1971 Nationals, only one flier, the Senior winner, scored over 500 points (503). It is unrealistic to say that the best fliers in the country cannot fly high 500-point patterns. A flier should be awarded the full value of his maneuver, Too many judges give a great maneuver 29 points and a bad maneuver 22 points. The AMA scoring allows for a 30 point spread from top to bottom - use it! Give credit for a maneuver which deserves it, Doing this would lessen the effect of appearance points and put the emphasis on a consistent quality pattern.

If we drop appearance points, the whole quality of the event is going to drop with them. Except for Scale events, Control Line Stunt is the only AMA event where the quality of the airplane is judged, There are some small U-Control stunters available in ARF. If we drop appearance points then we can drop the builder of the model rules too, just as they have done in RC. When this happens the man with the heavy pocket-book will have the inside track in the race for a good airplane. Even if all this did happen, the man with the prettiest airplane has got a psychological advantage in the judges' eyes before anybody even flies. Funny thing about humans - they are notoriously impressionable animals.

Construction: Sweet Pea's construction is different but not difficult. Necessary materials are a large flat board and some scrap wood suitable for jig blocks, as all major assemblies will be built in a jig,

All balsa, except as noted, should be the lightest available. The strength of this model comes from the structure. not hard wood. In most cases the strength to weight ratio is higher for a light airplane.

Use sensible gluing techniques. Don't overglue, but don't go the other way either. Make the joints fit; don't depend on glue to fill the cracks. When you use epoxy, remember everything you apply stays.

The wing is a sparless structure and is designed to be planked. If you do not want a sheeted wing, take out every other rib and build a D-tube wing. (If in doubt, consult September 1972 AAM 'The Hawker Typhoon.')

Begin by cutting out the rib templates - one root and two tip ribs out of 1/16 plywood. Sandwich 49 rib blanks, 25 outside and 24 inside between the templates. There are three 1/8 ribs on each side of center and one on each tip..." 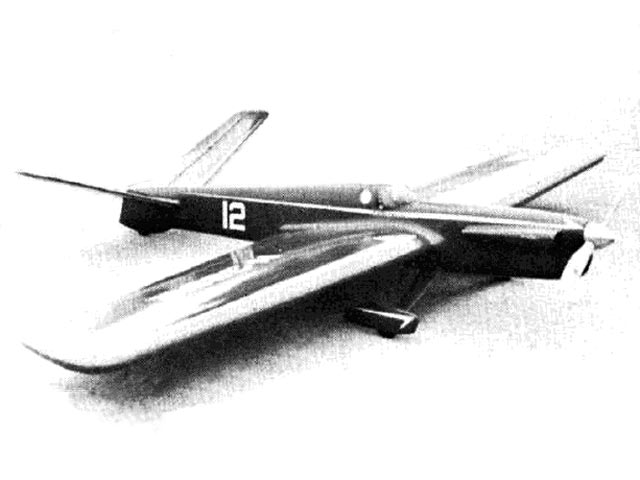 Curious that this drawing has 'Phase I' drawn on it as the title, given this exact drawing later appears in AAM Nov 1972 as the 'Sweet Pea', with only the name changed. I guess Phase I was a working title? Maybe the editor wanted the name changed. Curious.
SteveWMD - 01/12/2021
Add a comment