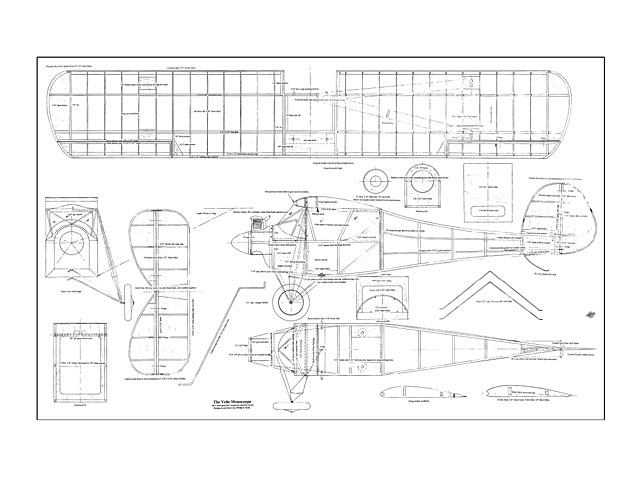 This is a model that came about by accident. I was involved in disposing of the models of one of our late club members when I came across a scruffy part-built model that I identified as a Velie Monocoupe. The model needed a lot of work doing on it, but it looked as though it might fill my need for a small electric-powered scale model that would fit into my MG TF sports car.

Why I start on these projects I do not know, since they never seem to go as planned and I finish up having to do more work than when designing and building a new one. On closer inspection, the model was more or less what I expected and I found that a lot of work was required on all aspects of the original airframe.

After this discovery, I thought that I might see how accurate it was in scale outline by consulting my photocopy version of the old soft-back book, Of Monocoupes and Men. Well it didn't look too bad and as it was going to be a very stand-off scale fun model, I was happy. The wings were, however, a mess. Not only were they damaged, but they were heavy - not what you want for an electric-powered model. The fuselage needed a lot of sorting out too and I wondered again if I was wasting my time.

Out came the drawing board and a new drawing of the wing was produced. I now felt that I was moving in the right direction and modifications were started on the useable existing airframe parts. The fuselage was hacked about, but it did have one great redeeming feature, the windscreen portion was separate from the rest of the structure. This has proved to be an inspirational piece of design work by whoever did it, since, by removing the portion of the front fuselage, easy access is afforded to the battery, radio gear and motor.

I was quite smitten with the little machine now and building of the wings commenced, I had thought that I could use the existing tail unit, but after some more deliberations decided a new design using core construction would be much better.

A brief outline of the build follows and I feel that any modeller who has built a couple of models from a kit or plans will find the Monocoupe well within his capability. The fuselage is basically a box with some side stringers and a rounded decking in front of the windscreen. The wing is a built-up structure with the tail unit using the warp resistant core construction and a laminated outline. There is a small amount of metal work required for the undercarriage, but this is not difficult if the components are thoroughly cleaned and the joints bound with thin copper wire.

The model did not take a long time to build and it was not too heavy, even though I decided to use some commercial 'vintage' wheels. I thought long and hard about the covering material and eventually decided to cover the model with tissue. The principal reason was that I do have a large stock of the old Modelspan tissue in several colours in light-weight and heavyweight grades and it does add a lot of rigidity to the structure. It is also good to rediscover techniques that have fallen out of favour in recent years.

The outrunner motor is a Tower-Pro 8M2409-12T 220W 400 type and the speed controller a Hi-Model 25AS 1.1 brushless ESC were inexpensive units as was the Tornado 1100 3S LiPo battery that was used on the original model.

I like to build the tail unit first as it goes together very rapidly and you can see some early results of your work. Cut out the 1/32 sheet balsa cores remembering that they are about one 1/8 of an inch smaller than the outline shape where the laminated outline is. Pin the core to the building board after marking the positions of all the ribs and spars. Add the spars and the ribs and leave to dry.

Remove from the board, turn over, pin down and repeat the operation. The laminated outline is fitted next. I have found that this operation is very easy to do using pliable 1/32 inch strips of balsa attached with thin cyano. Three or four strips should give the required outline shape. Sand the components to the section shapes shown on the drawing.

The wings are built using two balsa spars, a balsa trailing edge and a square balsa leading edge. The ribs are first slid onto the two spars and then pinned in the correct place over the plan and sheet trailing edge..." 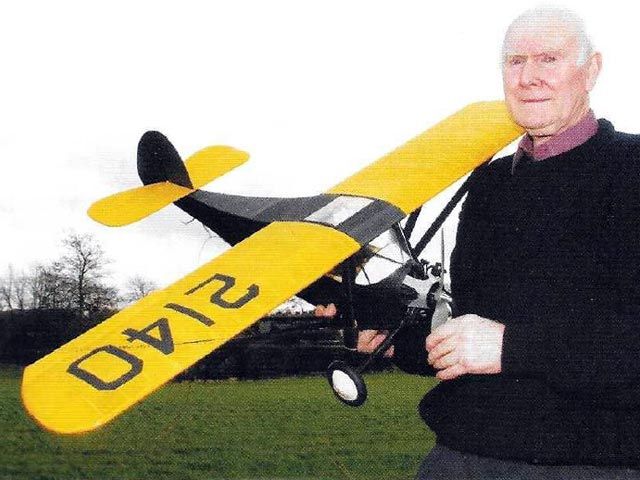