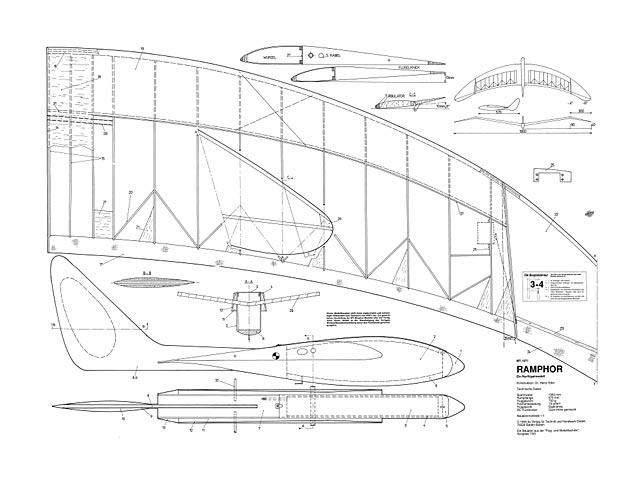 Conception: The 'Ramphor' was supposed to prove that a flying wing does not always 'only' have to fly fast and does not always have to look ugly. As is well known, it can be argued about taste that many of the modern 'wings' resemble a flying clothes hanger, but it is a fact. The 'Ramphor' offers the aesthetics of natural archetypes, which represents a certain contrast to the 'Ceozwos' with descendants.

The wing shapes that occur in nature are rarely straight, angular, they are more like a parabola or sickle! The additional construction work is not essential and is more than compensated for by an impressive and rustic flight image.

Now this shape, which emerged from the course of evolution, of course also has its aerodynamic advantages: The center effect is reduced and the lift distribution is therefore more favorable. But how do you get a slowly flying device stable? No compromises should be made here, because the slightest approach of instability, be it about the longitudinal, transverse or vertical axis, is known to cost flight performance.

To fly slowly, you have to be stingy with the weight (target about 700 g) and use a relatively strongly arched profile at the root, the cm0 of which is still within limits (own design). The motto: 'A lot of curvature at the root results in a whisker on the outside' then became a bitter truth during the flight tests, because it turned out that 'Ramphor' at the most favorable center of gravity is about 4 degrees inclined ailerons (that is, a S-impact profile outside) required..." 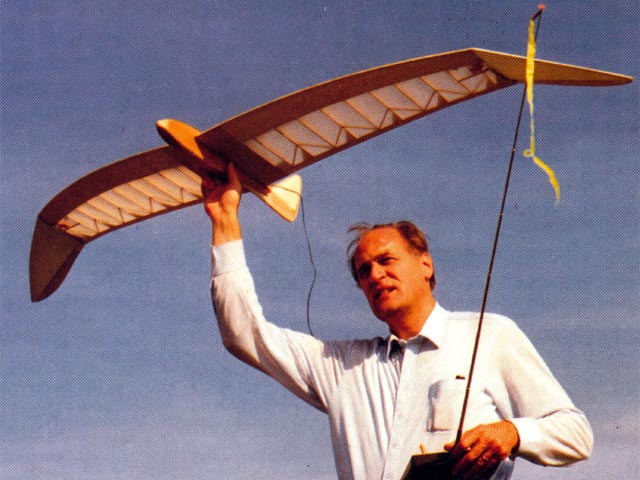 Are those reverse dihedral wingtips an aerodynamical necessity? That elliptical wing planform is pretty enough, it's a pity to spoil it with those tip cranks :-)
Miguel - 01/12/2021
Thanks for submitting this plan, what a magic looking model!! ......another one that will need to go on my 'to do' list!!! :)
Cheers,
Mark Stanley - 03/12/2021
Add a comment