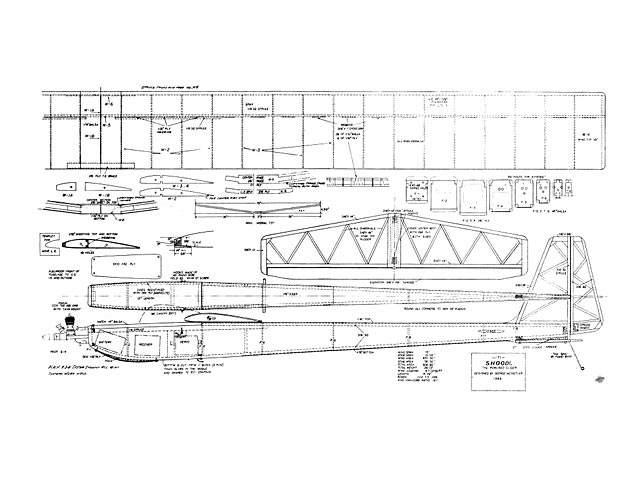 What's a Shoodl? This one is a 75 in wingspan, 26 ounce powered glider that will give you more flying fun than just about anything else. Just for the record, the name Shoodl comes from Austrian dialect German and means silly George. But it's not a silly aircraft. It will do what you want it to, can catch a thermal with the best of them, is easy to build, and easier to fly.

Now that we've told you what it is, you might ask why? Actually, this glider is designed for slope soaring without slopes. Here on the East coast, we don't have slopes with a nice steady prevailing wind. So the powered glider with a high aspect ratio wing is the answer. This craft has a 13:1 ratio. On the five minute engine run available from the Cox .049, you can grab 2400 feet of altitude. At that point you can hardly see the ship, so take it easy. Shoodl is the culmination of over 30 years of modeling; I built my first glider back in 1938. It was not too successful, but the second design is still in use in Hungary today as a medium advanced model for boys following planned model building courses. Shoodl is my 171st successful original design.

Flying this glider is simplicity itself. You launch it by holding it up and letting it go, No running. And, with a bit of experience you'll put it down right at your feet. Again, no running or chasing. Fly it out of any weed patch. Controls consist of rudder and elevator only. Engine cutoff is achieved by going into a half loop and holding inverted a few seconds - the engine quits!

Construction is quite straightforward. Standard size balsa stock is employed throughout. For instance, both fuselage sides are cut from one sheet of 4 x 36 x 1/16 balsa. The sheet covered wing is handled with 6 x 36 x 1/32 both top and bottom. All other parts come out of readily obtainable material..." 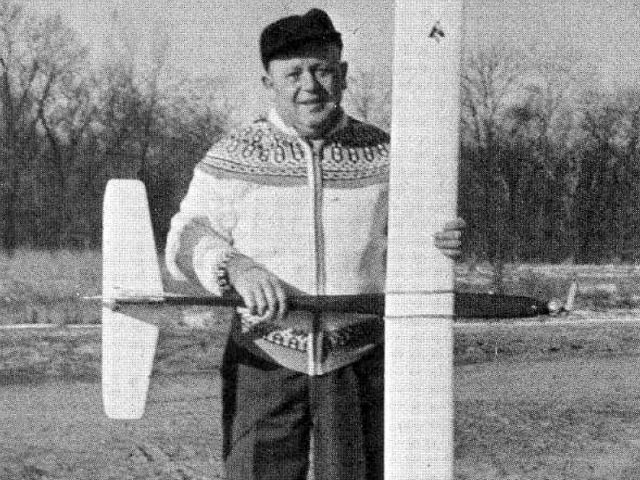