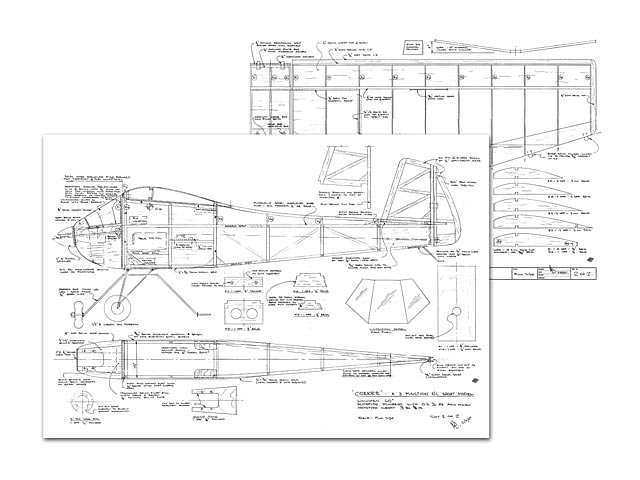 Note this plan consists of the original 2007 pencil drawings by Alan Wooster, submitted to Outerzone directly by the designer, himself. This design also later appeared in RCMW, June 2010.

Back around the year 2000 a modelling friend in USA sent an A4 sketch to my PC for a quirky little model called a 'Mud Duck' Such were my computer skills that to save those details I taped a sheet of tracing paper to the PC screen and painstakingly traced off all the details. I then built the model, around 60" span, and flew it for many months. I eventually gave it to a friend after his similar model was destroyed in a mid-air collision.

I missed that fun little 'plane and later promised to replace it with a similar model. 'Corker' is that model. The name? My good friend and fellow r/c flyer, Graham Corkill, a devout vintage model fan monitored this model`s early development. We all knew that Graham was suffering a terminal illness and I hurried the build along for him to see it fly. Unfortunately that was not to be. However, I did manage to get it test-flown and showed him some photos of it taken that day. He was beyond talking at that time, but I`ll never forget the grin on his face when he saw them. He passed away a few days later. I named this one for him, and it really is a corker model to fly.

It is a very easy and fun model to fly and could be considered an ideal project for the newbie to r/c modelling - both building and flying. My prototype was 3-function r/c - rudder, elevator, throttle, and powered with near-new OS 26 FS four-stroke engine. My newbie friend in UK, Henry, built one soon after (the yellow model in pics 005, 006) which was electric powered (and fitted with ailerons), and flies every bit as well.

Construction is very much the same as used on many similar size vintage and lightweight sport models. Anyone who can build a 'Tomboy' will have no problems with this one. It is basically built from balsa sticks and a little sheeting, and all covered with plastic film. One minor departure from the norm is that the nose section is built as a separate item and glued to the main structure late in the piece. Note that there is plenty of downthrust built in to this assembly. It is there for a good reason - do not reduce it!

I got tired if waiting for the ideal calm day to test-fly the finished model and rashly decided to send it off for the first time in quite gusty conditions at our local park. The OS 26 had plenty of power and the model leapt into the gusty conditions with almost no take-off run. It climbed away and skittered all around the sky. I applied full down-trim and although it bobbled around the park, it was quite manageable. That wasn`t really a fair trial and so we terminated the flight there and waited for better conditions.

The following Sunday was a regular club day and this time conditions were ideal. The model flew extremely well and in no time was whizzing around in tight-turning low-level figure-eights. It will loop and roll in either direction with ease although rolls are mostly barrelly efforts when left to rudder only. It would also maintain inverted flight surprisingly well, although I did keep to a practical altitude to try that.

All in all, I was delighted with this model. It might not be the prettiest to look at but sure was a hoot to fly. Eventually clubmate friend Dave decided he needed it more than me. I think he still has it somewhere. Alan W." 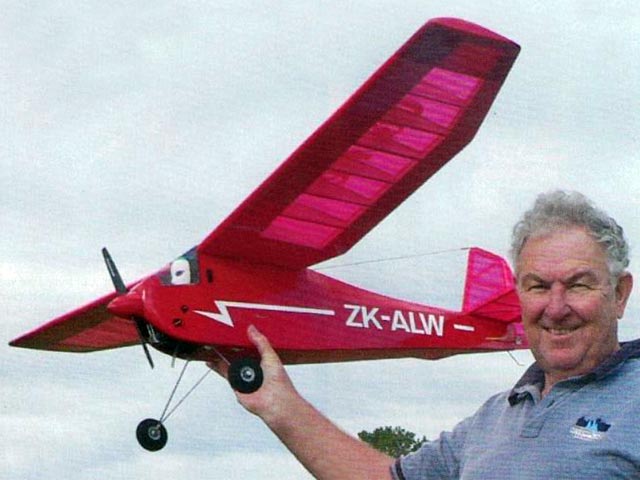