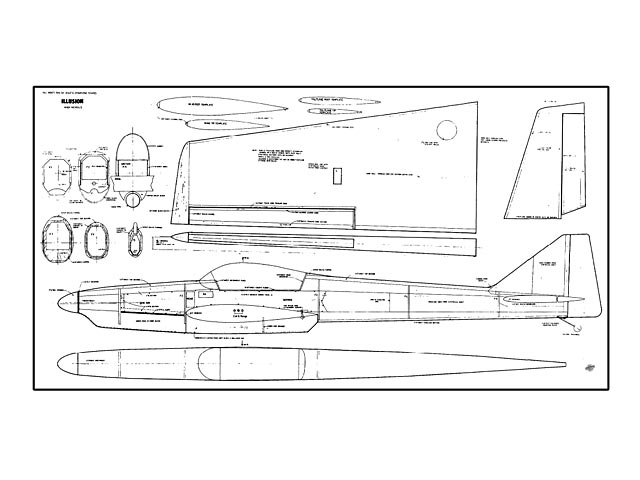 Quote: "Illusion was designed and built after I returned from the 1988 European F3A Aerobatic Championships in Sweden. This was my first international event and I was not only impressed by the flying skills of many of the top pilots but also by some of the models and the smooth style of flying which predominated. So, with the desire to build a model that would enable me to be more competitive internationally, out came the drawing board and a busy winter followed.

The model's pleasing, well-proportioned lines are enhanced with the enclosed inverted motor and semi-enclosed tuned pipe. An out-of sight vertical climb is possible on a good .60 enabling a near constant speed to be achieved throughout manoeuvres. The slim, rounded fuselage is adequate for unlimited knife edge flight, but helps reduce drift when flying in crosswinds.

Construction is fairly straight forward with balsa fuselage, glass fibre cowling and foam wing and tailplane. Although the original models were fitted with Merati pneumatic retracts and powered by a rear exhaust pumped .60 with tuned pipe, fixed undercarriage and a standard motor could be used, but of course performance will suffer.

Originally pumped Enya .60s were used, but recently I've begun using the new OS 'Hanno Special' because of the improved performance at low rpm enabling large propellers - typically 12 x 12 - to be turned at approx 10,000 rpm which give much power but reduces noise.

Futaba 1024A PCM radio is used operating seven servos; ailerons (2), elevator, rudder, throttle, in flight mixture control and retracts. So many useful features are available with this radio enabling a model of sound design to be accurately set up for precise aerobatics.

Anyone attempting to build this model will need to have some modelling experience and, for this reason, I have not provided step-by step instructions, but will mention points of particular interest.

Needless to say, it is not a beginners model to fly; however, anyone able to competently fly a low wing sport model should have no problems. Aerobatic models designed to fly the full FAI turn-around schedule need to be as viceless as possible enabling the pilot accurately to fly the many components that make up each manoeuvre.

Fuselage: Assembly of the fuselage is best done in a jig, or with the former centre lines over a line on the building board. With triangular strip and doublers added, join fuselage sides with formers 2 and 3. When dry, pull in rear fuselage adding remaining formers. Pre drill F1 for engine mount and install with correct side and down thrust. Nose top sheeting and rear decking should be added whilst still in the jig. When dry, remove fuselage and add lower rear decking. The motor should be fitted to attach nose ring and adjust spinner clearance. Remove motor and roughly carve the cowling to shape. Extra balsa should be added inside the engine bay prior to shaping as most of the existing fuselage sides at this point will need to be carved away.

Wing Obechi covered foam cores in high density (HD) foam from Geoff Mosley of Dalesman Wings were used on the originals. Not only are these beautifully made, but they are very accurate and I strongly recommend their use.

Holes are cut and bearers for retracts epoxied in place. Wheel wells and servo cut-outs are lined with 1/16in balsa after boring holes through the foam for aileron servo leads and retract tubing. Ailerons are cut from each panel and exposed foam surfaces faced with balsa.

Join the wings with epoxy on a flat board at the correct dihedral angle ( roots may need sanding slightly to ensure a good butt joint). Ensure that both wing tips are parallel so that any slight warp in either of the panels will be 'lost' at the centre, reducing the effect that it may have during flight. Add the plate for the wing mounting bolts, tuned pipe clip and reinforce joint with glass cloth and resin..." 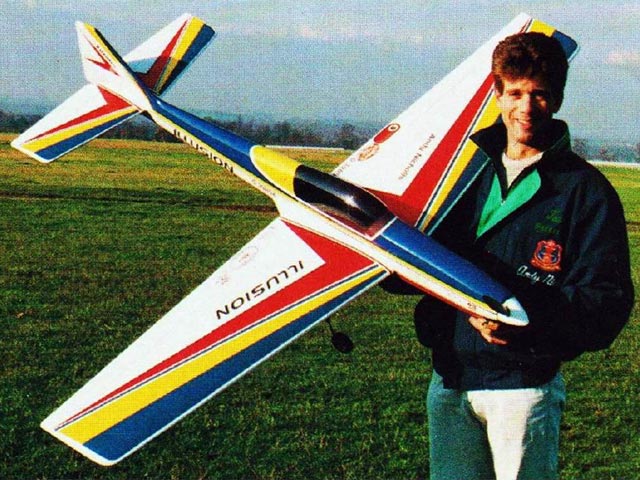