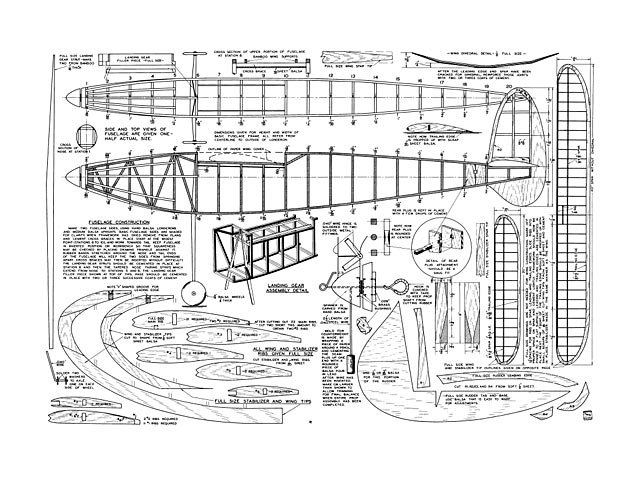 Note this is not a full size plan. This is a scan of the drawings as they were printed in the magazine pages, back in 1940. The ribs and formers are at full size, but the fuselage layout is shown at 1/2 size, the wing layout shown at 1/4 of full size.

Quote: "A consistent model that won the Moffett and Scripps-Howard contest with 3:02 and 8:30 average times. 1939 Moffett Trophy Winner, by Ed Naudzius.

It was just before the Moffett finals. We were chatting with Ed Naudzius, who had earned a place on the six-man team the day before. I'm not worried, he told us, I know the model will average three minutes.

You know the rest. Naudzius won the Moffett with a three-flight average of 3:02! And to further prove its consistency, the Moffett winner then took first place in the Scripps-Howard Junior Aviator races with an average of 8:30. Naudzius credits the model's consistency to simple construction. The ship is lighter than most Class C fuselage models. The weight saved is used in a larger motor. The glide is good and the climb long, lasting about a minute. An interesting side light to the contest record of the ship is that it has never suffered a broken motor.

CONSTRUCTION: THE fuselage is drawn half size, making it an easy matter to double the size of the plans for a full-size layout. (Maybe in another year Air Trails will be so large that you'll be spared the agony (?) of scaling up plans altogether.)

Since the actual construction is detailed on the plans, no difficulty should be encountered while the model is being built. There is one part, however, that may not be clear to some. On the part of the fuselage that the wing rests, the tops of the outside longerons are flush with the 1/16 x 1/8 bamboo strips which are used to hold the wing down. This means that the cross pieces will have to be cemented to the uprights in the fuselage sides 1/8 lower than the longerons. The alignment of the fuselage should be as good as you can possibly make it. Remember that the incidences of the wing and stabilizer depend on the accuracy with which you build the fuselage. A little care exercised during construction will prevent the loss of time caused by poor work and resultant poor flights. You can't dash through the job and yet expect real performance.

The nose plug should be a snug fit, so that it doesn't slip out after the rubber unwinds. The rear hook is a 3/16 square hardwood plug which is rounded in the center so that it doesn't cut the rubber. The tips are left square, so that they fit tightly in the 3/16 square hole in the rear of the fuselage. Note that the rear of one side is left open, to give access to the rubber motor. There are no warps in either the wing or stabilizer, so if any parts warp, they should be corrected as soon as noticed.

FLYING: As in any contest model, the primary aim is to get a near-perfect glide and a good climb to utilize the glide. While a "good" model can do time due to its gliding qualities, the same model can do much better time if the power run is extended. This idea has been used to get good time under conditions unfavorable to soaring flights. The model should be hand-launched without any turns in the motor to determine the gliding trim. If it dives, the wing should be moved forward, and if it stalls, the wing should be moved back slightly. Since the wing is held down with rubber bands around the wing and bamboo wing runners, shifting the wing should be easy.

After the glide has been trimmed to the point where the model is nearly stalling, a paper covering should be placed over the wing to preserve the lines of the fuselage. (No pun intended.) The model should be hand wound from fifty to seventy-five turns, so that the glide may be watched from a distance to make sure the model is descending at the slowest speed possible.

As more turns are given, the model might have a slight tendency to stall under power. This can be remedied by a little right thrust, which will tighten the circle and eliminate the stall. If the stall is excessive under full power, downthrust may have to be added also. On the original, one degree of right and one degree of downthrust produced the best results. The model should climb and glide in about two-hundred-degree circles.

A thousand turns may be safely stored in the motor if it has been broken in and is at least a week old. Although some model builders may not know it, most of the motors that broke during the Nationals were too fresh, having been bought just before the meet. To play safe, it is best to buy fresh rubber and store it in a dark and cool place for about a month before you intend to use it.

Note that when winding up with a winder the prop shaft slips forward and disengages from the prop. This allows rapid winding without having the prop spin around. The prop should fold against side of fuselage."