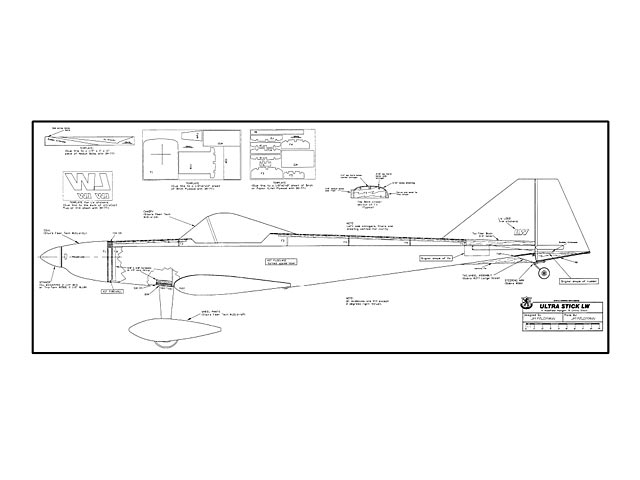 Note this is not a complete plan for a model. This is a mod to the ARF kit. See text below.

The Hangar 9 Ultra Stick is a terrific airplane. It has all of the virtues of the traditional Stick design, the smoothness and great visibility of a 1.20 size, and the added flexibility of control surfaces designed to take advantage of the mixing capabilities of a modern computer radio. The people who fly them generally have nothing but good things to say about them.

Appearance-wise, a Stick is a Stick, and while some people like their looks, I personally find them - well, kind of unfinished. I have also found that a low wing airplane generally flies a bit smoother than a shoulder wing, and that's how the Ultra Stick LW came about.

Converting a shoulder wing Stick to a low wing is fairly simple. Turn the fuselage upside down, attach the vertical fin to the top of the horizontal stab and add new landing gear mounts. The result is a Stick that is more neutral in roll and doesn't drop its tail on the landing approach. Nevertheless, it still looks like a Stick. I built the rounded top decks and added a custom cowl, canopy, and wheel pants, strictly for appearance sake. These items add some weight but the Ultra Stick wing is so big that the wing loading is hardly affected. Use an engine at the top of the range like the OS 1.60 FX or Saito 1.80 and vertical performance will still be unlimited.

The Ultra Stick LW uses the same radio set-ups and is capable of the same maneuvers as the unmodified Ultra Stick. The LW flies a little better, looks a lot better, the conversion is easy to do, and nobody else at the field will have one. (At least until they fly yours.)

Engine/Muffler: The engine size range for the LW is the same as for the Ultra Stick. Any single cylinder 4-stroke with its stock muffler will fit fine. 2-stroke glow engines will need a stock or stock type muffler such as a Disson Sport or a Mc 3000 series. A Pitts style muffler would require too much of the cowl to be cut away for clearance. Gasoline engines generally will not fit inside the cowl.

Propeller: The LW has about 1/2 inch more ground clearance than the Ultra Stick, so you can use up to a 17 in diameter prop. Use a 6 or 8 pitch. The LW is aerodynamically cleaner than the Ultra Stick and will go faster on the same prop. Pitches over 8 dramatically increase the chance of control surface flutter.

Construction: The first thing to do with any ARF kit is to tighten up the covering. I have found that tightening UltraCote with a heat gun is a temporary solution at best. I recommend using a covering iron and a sock to iron down the covering. This method seems to be a lot more resistant to future bubbles and wrinkles.

The second step is to cut the templates from the plans and glue them to the raw wood with 3M-77 or rubber cement. Use a band saw to cut out the new wood parts, smooth the edges with sandpaper and make sure the stringers will fit in the notches. Then peel off the paper and write the part number on each part. Before we assemble anything, a few modifications need to be made to the kit parts.

Modifying The Wings: The kit is set up to have the flap and aileron servo wires exit from the bottom of the wing. We want them to exit from the top of the wing instead. Find the precut servo wire exit holes in the bottom center sheeting of each wing. Do not cut away the covering over these holes. Instead, cut a similar hole in the top of each wing, but center it 5-1/2 in in front of the trailing edge of the wing..." 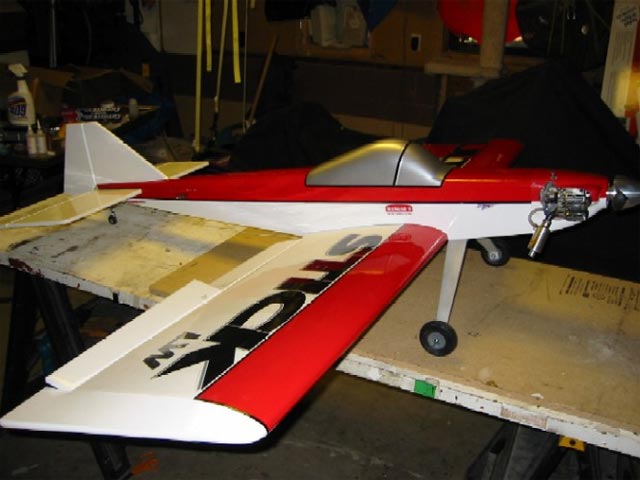