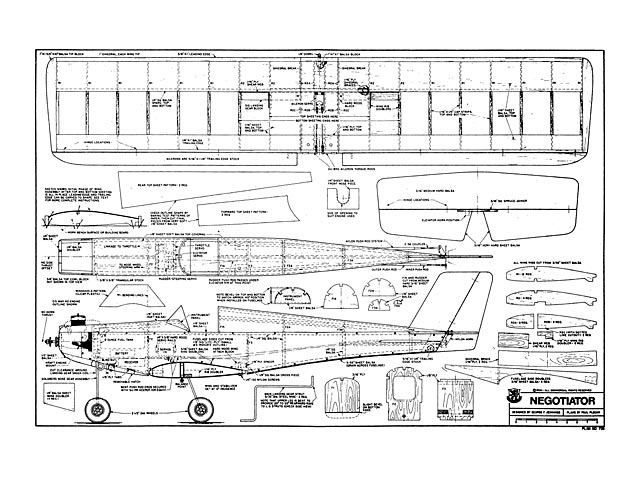 Quote: "Negotiator, by George Jennings. In spite of the fact that the Negotiator was designed to look like an airplane, it is both easy to build and easy to fly. Get out your .40 and go to work. We're sure you'll be pleased with the results.

The Negotiator was designed to meet the trend toward more realistic looking R/C models. I for one am growing weary of the current crop of sport pattern ships that appear to be designed to look like baseball bats that have sprouted wings and a tail. Yes, I know every airplane design is a compromise and pattern ships are designed for performance. Well, fellow modelers, have you been to a full scale acrobatic show lately? When I go, I see Pitts Specials, Chipmunks, Citabrias, and even Warbirds - flying like airplanes not sleek guided missiles!

The Negotiator is a good performer in spite of its looking like an airplane and in the hands of an experienced pilot, should bring home a prize or two. My guess is, though, that most of you who build this ship don't give two hoots about competition, but are Sunday flyers, like me.

The Negotiator has been designed for easy, fast construction and will get you in the air quickly. The constant chord semi-symmetrical wing with rib tabs assures true construction without a wing jig. The simple strip ailerons take the drudgery out of building ailerons. The upright engine insures easy starting and handling and the top sheeted fuselage
transforms the ship into a pleasing, realistic looking airplane. Because of the tricycle landing gear, ground handling is a breeze.

In the air, the Negotiator is rock solid and handles wind with no problem. With controls set to the minimum it is a fairly docile and easy airplane to fly. When control throw is increased things begin to happen fast and the roll rate can be described as rapid. Inverted flight and outside maneuvers require minimal trim changes.

The speed range is very broad and on landings the ship may be slowed down to a walk with no tendency to drop a wing, roll over, and play dead! If you have built and flown several WC models, the Negotiator should give you no problems - assuming you know how to fly ailerons, of course!

Before actual building begins, a few things should be noted. First of all, since you are probably not a rank beginner, only the highlights and questionable items will be covered in the construction text. Aliphatic resin glue, such as Titebond, should be used in all cases except where 5-minute epoxy is specified. You may want to tack parts together with one of the instant glues such as Hot-Stuff. However, you should go over each of these joints with Titebond. Do not substitute 5-minute epoxy for aliphatic resin because of the rapid weight build-up.

Ideally, this airplane should weigh 4.5 lb ready to fly and if yours comes out more than 5 lb, you have built too heavily. If you want a beefed-up indestructible airplane, carve one from soft pine, finish it carefully, and hang it up to admire. Remember, the more weight, the higher the wing loading, the poorer the performance..."

Quote: "I don't see this one on your website. It's the Negotiator from RCM, plan #755. I must have found it on RC Groups. I just finished making a kit of it, so I thought it would be useful to have it on Outerzone, which I think is the top place to find plans. The plan is a bit fuzzy, but it's quite usable. There's another scan on the AF site, but it has a blank stripe down the middle because it was scanned from a magazine. Thanks," 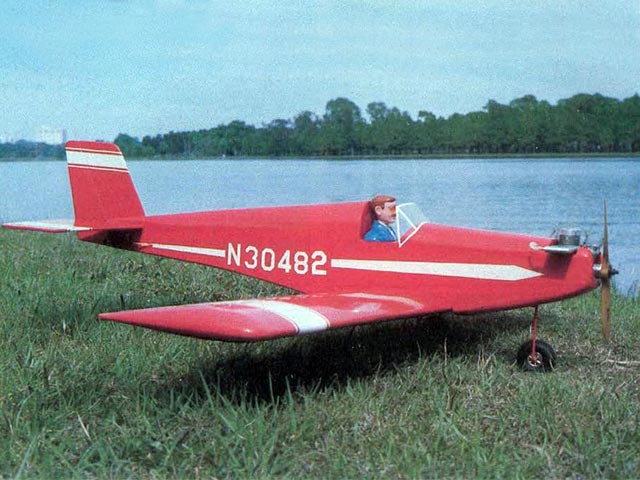