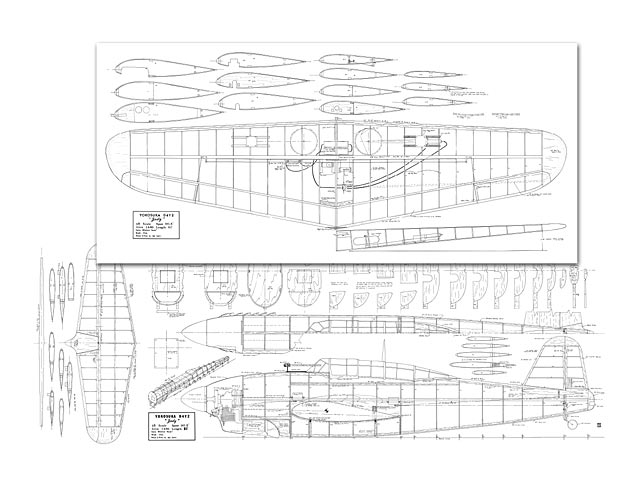 Note this plan is derived from the raw scan as posted on the AF site by ocoee96 (see datafile). This version here has been aligned and cleaned, also split into better sections. Filesize has come down from 35 MB to under 2 MB.

Quote: "A 90 inch span 1/5 scale Japanese dive bomber for those who want the unusual in big aircraft. This one can accommodate a chain saw engine. Yokosuka D4Y Judy, by Bob Taylor.

'Judy' was the American code name for the Japanese Yokosuka D4Y Suisei (Comet) carrier-based dive bomber. The 'Comet' designation seems more apropos, since the aircraft had a rapid ascendency to glory, only to glimmer briefly and fade out. It was one of the most beautiful airframes designed by the Japanese, and it was one of the first airplanes to fade into obscurity after the war.

The Judy started off as a design effort to improve upon the German Heinkel He 118 bomber. The Japanese Navy believed that they could get better performance, and they also wanted to avail themselves of the Atsuta 12-cylinder liquid cooled engine. The concept was to keep frontal drag to a minimum with the streamlined liquid-cooled engine. Other than the Ki-61 Hein, the only other aircraft in the Japanese inventory to use this in-line engine was the Judy. Because of the unreliability and vulnerability of the liquid-cooled power plant, the Judy's career was plagued with engine problems, until the eventual transition to a radial was made with the Mk.III version.

As a dive bomber, the Judy was unique, in that the designers kept the span short enough so that no wing-folding would be necessary for carrier operations (this also helped save weight). Actually, the wing was comparable to the Zero's, yet the plane was actually faster than that fighter. Dive brakes were fitted ahead of the flaps, and the gear were well forward to keep from interferring with the spars. By making the Judy a mid-wing design, the bombs could be stored internally, while the Heinkel had to carry its ordnance externally. With a 500-pounder in its belly, and a few lighter 60-pound bombs on the wing, the Judy could travel great distances . making it the ideal carrier-based bomber_

Unfortunately, early testing revealed wing flutter and spar fatigue in the diving mode, so the Judy was hastily re-equipped with cameras and used for recon missions. It was in this lesser role that the machine was to make its debut aboard the carrier Soryu, in the invasion of Midway. With bad luck still plaguing it, the carrier was sunk early in the engagement, before any of the aircraft could be deployed.

In the battle of the Marianas, some 141 D4Y1s were launched against the US fleet from remote island airstrips. The total lack of armor plating for the crew and/or the gas tanks (the light weight of the Judy was the key to its payload and speed capabilities), the mission turned into a slaughter, and all aircraft were lost. Later in its career, the Comets became perfect fodder for the notorious Kamikaze missions.

Once the spar and wing problems were remedied, the Judy went on to become the fastest dive bomber of the war. But, like most Japanese designs, the machine was to be a multi-purpose airplane, serving in night fighter, attack and reconnaissance roles, as well. The radio operator usually had a 13mm machine gun in the rear cockpit, and two machine guns were fitted in the fuselage decking behind the cowl. But, with a top speed of 360 mph, the Judy's best weapon was the defensive tactic of running away.

When the in-line engine was finally abandoned as being a total nuisance, the Judy's charm and beauty were lost. The radial engine made the plane look awkward and grotesquely fat. It is undoubtedly because of the cosmetic changes that occurred when the round Daimler Benz was fitted which contributed to the quick demise of the Comet as a memorable fighting machine. By the end of the war, the only thing the Judy was known for was its almost total obscurity!

After many months of pondering and trying to make a decision for a scratchbuilt project, I finally decided on the Judy. It was the result of a process of elimination from a list of ten aircraft which were interesting subjects that were seldom, if ever, built as a model. Reference books by the dozens were studied on all types of aircraft, but the Japanese designs intrigued me most of all. These aircraft seemed so perfect for models, because of their huge wing and stab areas.

The question was settled, it would definitely be a Japanese airplane. The Judy won out! She had the most beautiful configuration of them all with the mid-wing and long moments. This just had to be a beautiful and stable flying model. The big air scoop for cooling, the wide track landing gear and small wheels made it a perfect subject.

The next decision was what size would this model be? I wanted a big airplane, but it had to be a model that would fit into my station wagon. Small airplanes were commonplace and no longer a challenge. Big had to be beautiful, The result an exact 1/5-scale model with a wingspan of 90-1/2 in. The wing area is 1,486 sq in, length 81 in, stab span 40 in and the projected weight is about 21 to 24 lbs. Wow! What a model this was going to be.

This size presented some design problems, such as: What engine should be used to power this monster and what landing gear would support the weight of the model and still retract a pound of wheels? I had a Webra .90 on hand, but I knew this would not do the job. Perhaps a gear reduction unit for the .90 might be the answer. I opted to try it with a Maximizer. (This was later found to be inadequate due to the overheating of the Webra and was replaced with a McCulloch 'Husky'.) Dave Platt was in the process of designing his 'Y-lock' retracts, and I decided we would give these a try.

With these decisions made, drafting of the plans was started. The design was scaled up from a 1/50th scale three-view found in Koku Fan #4. (Please, won't someone translate these marvelous books into English?) This is a beautiful book with lots of pictures but, unfortunately, I couldn't read it. A Japanese girl working in a restaurant helped me decipher some of the picture captions and various excerpts.

The plans were finally completed and the construction of the fuselage started. This is basically a monocoque structure, with 1/8 balsa bulkheads which is skinned with 3/16 balsa sheeting.

The engine cowling was made of fiberglass by shaping a block of urethane foam and laying up the fiberglass mat over it. The foam was then dug out from the inside. The cowl is attached to the fuselage with three camlocks, two of which are accessible through the gun troughs and the other through the air scoop. A Zinger 5 inch aluminum spinner is the exact size and shape, and works quite well for this model.

The fuselage is built upright on the bench, using jig tabs for perfect alignment. The top half is sheet covered while still pinned (nailed) to the building surface.

The wing is the usual egg crate type construction with 1/8 balsa sheeting. The gear doors were laid up with fiberglass cloth over MonoKote (a la Dave Platt) before cutting out for the wheels. The stab and fin are built up and sheet covered with 1/16 balsa..." 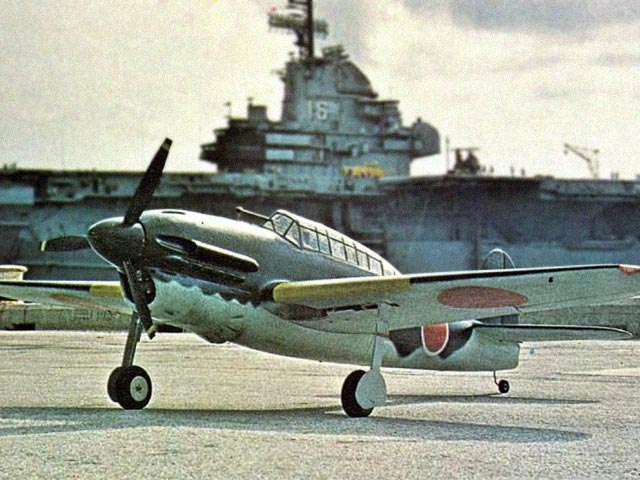