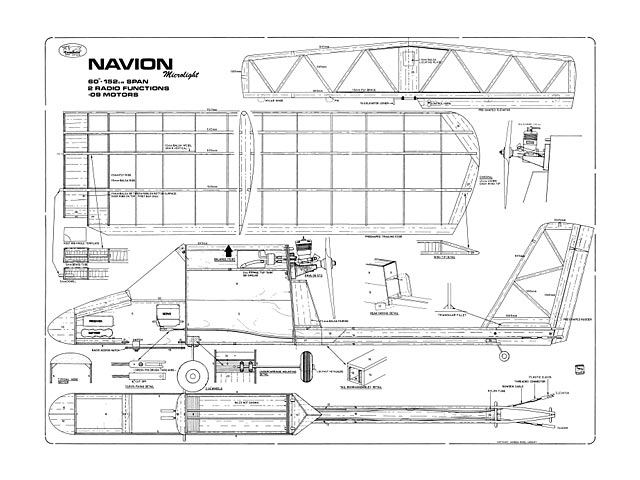 Note this plan is derived from the raw scan as posted on RCGroups by checkprop (see datafile). This version here has been scaled up to full size, aligned, also had many speculative pencil lines removed, in cleanup.

Open the box but don't take out the wood until you are going to start 'cos there's a lot of timber under the plan and instruction manual. The latter two are clear and well printed, the manual especially is what all beginner's kits should have.

So far, a good initial impression. There's a good bagful of hardware bits and another bag of small pieces of balsa and ply. To ease finding one's way around the wooden bits are all numbered and there is a hardware list, both that included in the kit and items needed to complete the Navion. The former is very long, the latter list commendably short.

Impressions so far, pretty good, I like it - now to the first good bit.

The Wings: A lovely structure here with three top and three bottom spars, hefty leading and trailing edges, add up to a solid stable structure. The ribs needed a fair bit of sandpaper work to finish, also watch that all those spars lie in their slots easily to avoid building in stresses.

I don't intend to repeat the instruction book on building this model, the only assumption made really is that you can open a tube of glue. Follow the steps in the book and you'll come out with a good pair of wings joined by a hefty wire joiner (at five foot span, not a bad idea) with good flying manners. I especially liked Cambria's wing section, with a slightly raised leading edge rather than a flat bottomed section, to give good handling rather than the ballooning tendency of the latter which always gives the novice a hard time. Yes, high marks for the wings.

Fuselage: A large forward ply 'pod' with a balsa 'boom' braced by gussets to the rear pod former gives a solid fuselage. Rudder and elevator cables are built into the boom during construction. Radio and tank bays are large, radio access is through a hatch in the fuselage bottom with the two ounce tank recommended hiding under the wing. Undercarriage is a tailwheel type with the torsion bar mains fitting into a hardwood block in the fuselage floor. The legs are accurately pre-bent and spring cl.ips are provided to secure the wheels. A pre-formed tailwheel leg completes the arrangements, strangely the tailwheel is included in the kit but not the mains.

At the front of the body is a block nose block with a block top deck, just to give the woodcarver's brethren a chance to show their skills. A large perspex windscreen finishes off the front. As the model is ad-vertised by Cambria as a semi-scale microlight I can see mine acquiring at least some kind of pilot, probably not a good idea for a novice but I can't stand empty cockpits on my models. As said before, just follow the instructions book and one will come out with a good, straight fuselage. It's like building by numbers really!

Tail Group: Tailplane and fin are from strip, with a geodetic structure - light and easy to build up warp free. Control surfaces are from pre-shaped stock, they appear a little small if you're used to a more usual configuration but by now I am convinced that the Welsh wizards at Cambria have got their sums right with this little number. The tailplane fin are banded into position, with keying to keep everything in alignment - good point.

Covering and Radio: Film overall is recommended, Cambria have been right so far so film it is. Wings and tail are routine but the fuselage needs thought over where to put joins and overlaps, especially around the pod boom join area, it's not too difficult with a little organised thinking. All joins were then treated to a coat of fuel proofer to prevent the dreaded oil seepage.

The design philosophy of Navion is a low powered two function model of considerable size, hence the radio fit is easily achieved. I felt that supplying servo rails rather than the instructions merely suggesting servo mounts or tape would leave the novice a little less in the dark. However, the servo position and control snake positions shown work fine.

Perhaps the above is a little over-critical, no manufacturer could cater for all shapes and types of gear. A real plus here is the fact that all the hardware to hook your servos to the control surfaces is in the kit. Add to that only two servos are needed and there is ample room for radio in that spacious nose.

A little deviation: With Navion ready to test fly, the less than ideal real world intrudes. Firstly, my club has a requirement to fit secondary silencers to all two-strokes to combat the dreaded noise complaint. Then there is a little known local rule about having to be able to stop one's motor positively in flight to land immediately. (Comes of sharing airspace with much bigger stuff.) I get around the former by using a glow motor with a home built muffler system and a big prop. A shame, I had figured on being able to stay up for about 30 minutes with a 1.5 diesel and 2 oz of fuel. As it is a case of conform or no go fly, a little judicious juggling of positions in the radio bay and Navion acquires an engine cut-off system (it looks a lot like a throttle servo - sorry). The weight increase hardly registers on the kitchen scales, Navion checks in at 46 ounces, that's 2 ounces over the weight in the book, and she balances just right which always proves to me that the designer knew his stuff.

Pre-flight walkround: By following Cambria's instruction book you'd have to put in a lot of effort to go wrong. All the wood bits fit welt, the hardware package is good and comprehensive and the finished model is attractive and certainly looks like a good 'un.

At the end of the building instructions is a list of 'Important points' on flight safety, which any modeller would do well to heed. There is also a post script advising the modeller to read a good book on R C flying, sound advice indeed. If I was in that class I'd have lots of time to do just that, as soon as Navion was declared ready to go the Cornish windy season arrived with the monotony of sitting there with a new model - watching the sparrows walking to avoid the wind. (Do slope soarers get spells of flat calm when they finish their latest 'leadsled' I wonder?)

Clear for take off: At last a calm-ish day arrives, I've already set up the motor while waiting for the wind to die down. The flying instructions detail how to hand launch and trim the model out subsequently. A hand launch works fine, after a slight drop Navion climbs away, only needing a little 'up' trim. Climb is quite spirited on the low power, elevator and rudder authority is good. Turns can be entered and left without the unsightly yawing that inflicts many three function models. The stall is difficult to provoke and the model will not spin at all.

At height I try the acid test of the model's stability. This involves putting her into a 90° diving bank and letting go of the sticks (a typical beginner's trick!). Navion just slowly rolled wings level, pulled out of the dive then started a climb until her speed bled off. I was so fascinated by this I spent two flights repeating it! Navion is very good at self righting. She is also very good at gliding, as I discover when the motor stops. Despite the bulky fuselage, Navion has a very good glide angle indeed. Also in the early flights I note a commendable lack of the 'ballooning' tendency often encountered with trainers.

To prove her training capabilities a workmate who has expressed an interest in learning R,C flying becomes a guinea pig. Though a full size pilot he has never tried model flying - the best test for a beginner's model must be a beginner. A quick briefing and he is given control, at a good height. After a couple of right hand orbits, R/C has a new convert and Navion has proved to be kind to a novice's handling.

Well, is it a good value kit? Yes. Building is very pleasant, not for the 'buy today, fly tomorrow' type, the plan and instruction manual are an example many could follow. Flying manners are good, as well as being a good basic trainer, I found her to be a relaxing and pleasant aircraft. Though not aerobatic (but I have done a stall turn and loop) she is great fun to practise accurate course flying with.

All in all, nice one Cambria. The review model is destined to be a club trainer and air experience model, it certainly has the right qualities for the job. Available from all Cambria stockists." 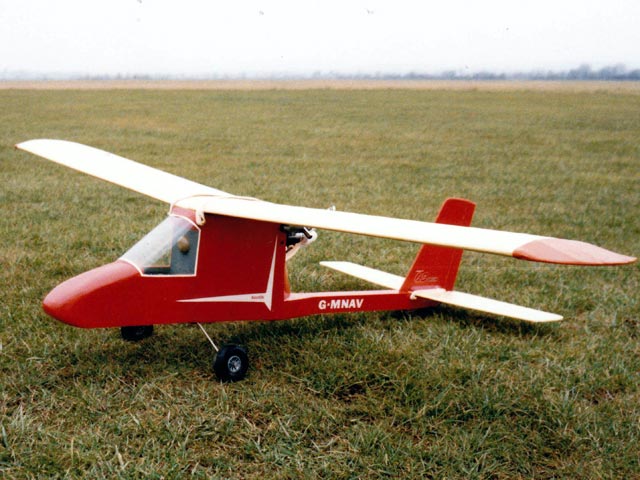 Hi. This delightful little machine [main pic, 006, 007] was my first RC aircraft. Unfortunately on it's fourth flight the wing structure failed. I was just about to scrap it when my instructor said that there is no such thing as a write off, re-build it, so I did. This time I changed the wing spars from balsa to spruce and put webbing in between. Also strengthening the fuselage midway just below the engine. It went on for many successful flights after that. Many thanks for reminding me of this model.
David Wright - 13/11/2021
Add a comment