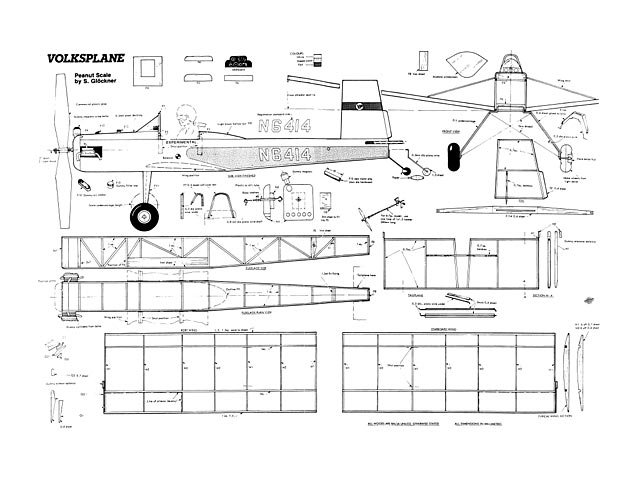 THE FIRST FLIGHT of the Volksplane happened in summer of 1968. The aircraft was designed by the professional aircraft engineer WS Evans. At first glance it is not evident that Evans' 27 years of experience in aircraft design assisted to create the Volksplane - Evans' aim was not to have a high technology aircraft, but to get a homebuilder's first aircraft that was easy to build from cheap materials and also showed high stability and not too bad a performance.

To get an optimum compromise between construction effort and results, Evans made thorough stress and performance calculations and researched for cheap materials. This time of paperwork consumed two years. The result is an aircraft any average do-it-yourselver or homebuilder could build, since the Volksplane is nothing else but a huge model aircraft.

It has a box type fuselage, built from ply sheets, stiffened with spruce spars. The ribs of the wings and empennage are cut from ply and have lightening holes for weight reduction. Leading edges and spars are made from stock spruce spars and the trailing edges are built from ply strips. The VW-engine is bolted directly to the 3/4 ply bulkhead and enclosed with a glass reinforced plastic (GRP) cowl.

That Evans succeeded in designing an ideal aircraft for the beginner in the homebuilder scene is proved by the facts, the Volksplane has been built by homebuilders all over the world.

Because of the simple shape of the Volksplane the aircraft is also suited for the beginner in the Peanut scene, even though low wingers are not usually to be advised to the lesser experienced modellers. The long tail arm, and the slightly increased dihedral give the Peanut Volksplane good stability and make the model easy to trim and suitable for the beginner.

Fuselage: The fuselage is built in the conventional manner as for most rubber scale models. Cover the plan which is attached to the building board with plastic sheet to prevent the fuselage components from sticking to the plan when the glue has dried. Build up the fuselage sides one on top of the other to get two identical sides. Thinned PVA glue or high viscosity cyanoacrylate glue should be used.

Since the top longerons are straight, the fuselage frame is assembled inverted. The fuselage sides are joined first by nose plate (F3) and stern post (F8). Crack the longerons slightly behind part F1 and add the 1 x 1mm balsa spacers that join the fuselage halves.

When the glue has dried, add S1 for fixing the fin, and reinforce the cracks in the longerons (behind Fl), with small drops of glue. Make the turtledecks in front and behind the cockpit from light balsa, but do not yet glue in place. This is done when the fuselage is covered.

Fin and Stabilizer These parts are built-up on the plan in the same manner as the fuselage sides. The static balance weights H1, H2 are glued in place after covering.

Wings Prepare all parts ready for assembly. It is advisable to sand the leading edges to shape prior to cutting the component from 1.5mm balsa sheet. After sanding, cut off the leading edge using a sharp balsa knife and a steel ruler. If you cannot get the thin balsa sheet that is required for the ribs, sand down a strip of thicker balsa to the correct size. Now build the wings over the plan..." 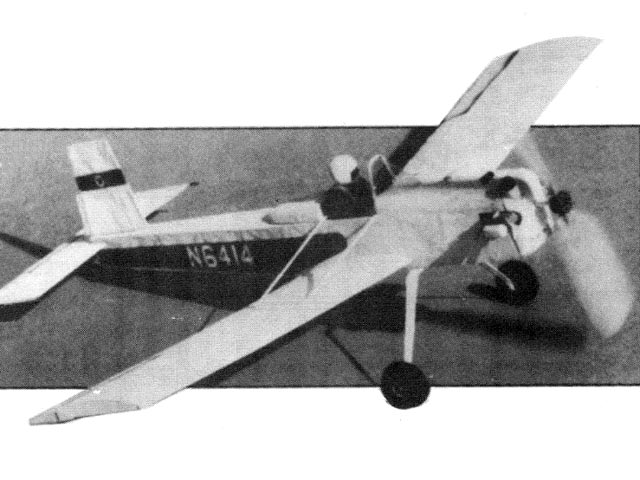